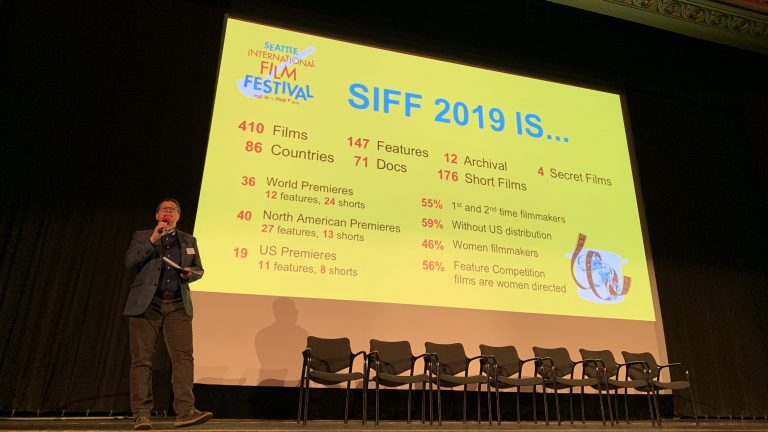 Nothing says “Springtime” in Seattle quite like a citywide occasion to hide inside movie theaters for twenty-five consecutive days and nights. That’s right, the arrival of the 45th Seattle International Film Festival is upon us, bringing a complete lineup of 410 films to town. Broken down, that’s 147 narrative features, 71 documentaries, 12 archival, 176 shorts, plus four secret films revealed only at the moment of Sunday morning screenings to passholders who have signed an oath never to reveal the titles. Of these, the programmers did an admirable job of seeking novelty and diversity — the films represent 86 countries, 55% are first or second-time filmmakers, 59% are still seeking U.S. distribution, and 46% are made by women filmmakers. There are 36 World Premieres (12 Features, 24 Shorts); 40 North American Premieres (27 Features, 13 Shorts); and 19 US Premieres (11 Features, 8 Shorts).

Start diving into the website now: tickets go on sale to the general public on May 2rd, but members get a one day head start. Free printed program guides should be on the street (this year, mercifully arranged in alphabetical rather than thematic order). Press and donors got a curated tour of the schedule last night, members are in for hours of previews tonight, but if you couldn’t get into those events, sit back, turn your preferred streaming device to SIFF’s YouTube page, and click “play all” to get trailers for over 150 festival films.

The festival officially kicks off on May 16th at McCaw Hall with a fancy gala presentation of Lynn Shelton’s Sword of Trust. With the need to please everyone (or at least not offend sponsors), Opening Night films are famously hit-or-miss, but launching the festival with a hometown hero of a director leads us to believe that this one could be a better-than-usual excuse to put on whatever passes for Seattle finery, walk the red carpet, and catch up with film friends during the mad-rush for hors d’oeuvres, strategic deployment of drink tickets, and maybe just a little bit of dancing. All of this glamor can be yours for the price of a general admission ticket ($75/$65, members) all the way up to the full-on valet and gift bag luxury of the $275 “Red Carpet Experience”. Never fear, if history is any indication, the gala will end before midnight to give you time to recover before charging into the next three weeks of filmgoing that starts in earnest on Friday afternoon.

Parties, special events, and other film-adjacent occasions for revelry continue throughout the festival, but there are a few big ones to get on your calendar before tickets sell out. The Centerpiece Gala, Late Night, directed by Nisha Ganatra based on a script by (and co-starring) Mindy Kaling in which Emma Thompson struggles to get her groove back as a talk show host. I saw it at Sundance, and it’s not to me missed: a sweet delight that’s funny and insightful women in comedy and the perils of daring to get older in show business. (Sunday June 1, Egyptian). Along the way, SIFF pays tribute to the effervescent and affecting Regina Hall with a career retrospective Q&A followed by a very special screening of the very special Andrew Bujalski film, Support the Girls. If you somehow missed it last year, this is your chance to see it on a big screen instead of in your Netflix queue. SIFF closes with another aptly-titled buzzworthy dramedy out of Sundance, The Farewell, Lulu Wang’s semi-autobiographical story of a return to China under the guise of a wedding to say goodbye to a dying matriarch. It stars the amazing Awkwafina and serves as the appetizer to the Closing Gala at Mohai. (June 9, 6:00pm, $75).

We’ll leave you with this year’s SIFF trailer. If you’ve followed our advice, by the end of the festival you’ll have seen it so many times that you should be able to quote it line for line.

As a reminder, to  SIFF like a pro, revisit our time- and fest-tested tips, lightly-updated for 2019:

Finally, despite all of this strategic advice, it really never hurts (too much) to try your luck with whatever happens to be playing on whatever night you happen to be free. Not every screening has an interminable line, sometimes that scary-looking line is just hard-core SIFFers with time on their hands and/or an ingrained sense of promptness. Many many times you may walk right in to a half-empty theater. It’s the chance to experience seeing something you enjoy on some level, if only just a window to a different world/experience than what you’re used to. We look forward to seeing you at the movies!