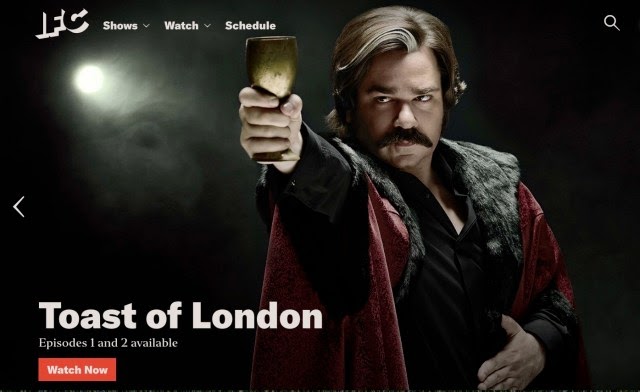 I don’t know if I can legitimately claim to be president of the U.S. Matt Berry fan club, as there might be such a thing and I am not connected to it in any way, but I appreciate Berry’s hammy gusto and rummy-plummy delivery on a deep, even sub-molecular, level. Also, having been living in the UK for the last six years, I happen to have seen the entire Toast of London series a minimum of three times. So I vault now to the keyboard to alert anyone who may be interested that U.S. viewers can now choose Toast on IFC or Toast on Netflix.

Matt Berry is perhaps more famous stateside recently for mis- and over-enunciating on What We Do in the Shadows on FX (also Hulu) though of course fans of off-beat British comedies (Google Trends tells me that “Britcom” has never really caught on) might remember him from such high points as The IT Crowd and Garth Marenghi’s Darkplace (with fellow IT Crowd alum Richard Ayoade), or even The Mighty Boosh. Less visibly, he’s the voice of piggified Prince Merkimer on Disenchantment (“this elf’s blood could perk up my tuckered dong”).

On Toast of London, Berry is the classically-trained Steven Gonville Toast, who splits his time berating his long-suffering but equally talent-less agent Jane Plough (pronounced “pluff”, played by Doon Mackichan) for not getting him better work and running to voiceover work before rehearsals. You might think the voiceover sessions would get old but Berry can defamiliarize any sequence of words in delightful ways, and a scene in which he does nothing but helplessly and with growing bitterness roll out his repertoire of “Yes”es will confirm whether you are a Berry fan or not. A friend of mine in Manchester was delighted to discover that his elevator’s floor announcements are delivered in the same register as Berry’s “Fire the nuclear weapons!” and when I visited we rode several extra floors laughing maniacally to the growing alarm of other passengers.

Now, it is a series which can assume a good deal of cultural knowledge. For non-Brits, the most impenetrable subplot might be the first episode in which, well, let’s let IMDB synopsize, that’s what they’re there for: “House-mate Ed is hosting a Nigerian girl-friend Kikini, though, as a result of deliberately botched plastic surgery by Ray Purchase, a rogue cosmetician and ex-actor rival to Toast, she looks just like Bruce Forsyth.” On the other hand, the season 3 episode in which Toast meets Jon Hamm (playing himself) and, having previously sustained a concussion by falling head over heels, then falls head over heels for Hamm, needs no real explanation.

The craft of acting of course plays a large role as well: there are troubles with testicle-crushing directors, plays so terrible their names can’t be said out loud (not to be confused with Macbeth, which Toast gets the chance to star in), and instructions on how to stand properly in high-wind roles. Not all of this is confined to the stage: one episode details the blowback from Toast’s having spoiled the ending of a play in a promotional interview.

It is probably too much to call Toast Berry’s Fleabag, but he is no one’s role model: a drunken womanizer, he conducts a long-running affair with the wife of his nemesis Ray Purchase (affording Berry the chance to trot out the world’s most rubbery O-face), cheats on taxes, is prone to an assortment of bigotries (“No. I mean, I won’t play a bald man, not even on Radio 4, but I’m not gay-sceptic.”), and maintains an outsized self-regard only occasionally punctured by his brother, Colonel Blair Toast (Adrian Lukas), who never fails to transmit the Toast family’s loathing of Steven’s career. There are almost no serious moments in the show, but Berry humanizes his monster of the theatre with small winces around the eyes, registering the cuts Toast sustains as he plows breakneck through London on his way toward the elusive acclaim he seeks, or, failing that, the Prostitutes-and-Celebrities Blow-Football Tournament.