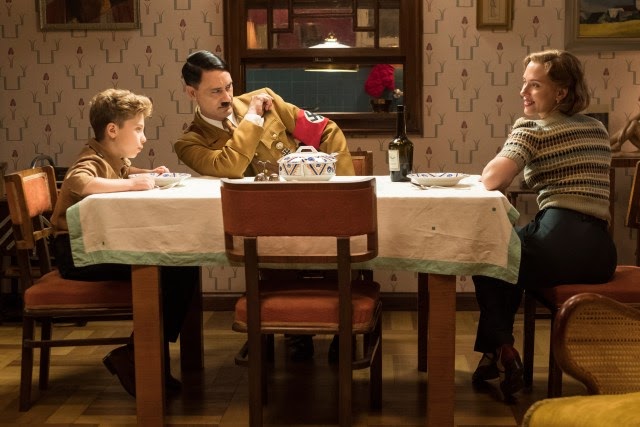 So … what was the best movie you saw in November

Morgen: Luckily, I hadn’t yet tossed up my review of Jojo Rabbit yet so I could gush about it here. I don’t exactly know what I was expecting when I excitedly entered the theater mid-November. I’d been looking forward to this film because of its farcical, slightly historical, and highly ironic twist on a twisted, nightmarish time for humankind. Turns out, I didn’t know this thing would turn me inside out. With family both surviving and perishing in WWII, I have an odd relationship with it; one where I feel the pain of the past but, I’m far enough removed where I can appreciate its telling (my mother doesn’t have that luxury). So, I can see the film for what it is: a goofy look at an insane time, a shot through the heart with a water gun. While I did feel like the silliness did overshadow the growth of the main character a bit, it was beautiful, sad, shocking, and uplifting. It’s also a painful reminder of how close we now are to the ideology of the past, to the mentality that led them there… uncomfortably close, and we need to take a harsh look at ourselves and stop the madness before it begins. I definitely laughed, and cried, and gasped. See it.

Chris: I mostly enjoyed Jojo Rabbit, I think. I left the theater thinking that it’s probably the second funniest movie I’ve ever seen about Nazis, but there’s a lot of room in between The Producers (my very favorite funny movie) and this. I absolutely agree with Morgen that it does a great job of depicting how ideology can be inherited and how people can be blindly obedient to it without understanding its implications.

Josh: As I said last month, I am disappointed to say that Jojo was Not For Me. I feel bad about not liking a movie that’s trying so hard to be upbeat with so many good gags and wearing its good intentions on its sleeve like so many merit badges. I suppose bravo to Taika Waititi for taking this on and casting himself as a buffoonish Imaginary Hitler and surrounding himself with some very good actors — especially the kids at the center of the story, Roman Griffin Davis as an adorable little anti-Semite with terrible ideas that are played for cute and Thomasin McKenzie as the story’s Anne Frank designate, hidden away in an attic, with her own survival hanging in the balance of her ability to charm the twee little Nazi youth into not turning her in to the authorities. For my tastes, the stakes were too low and his interest in cheerleading an “anti-hate” message leaves results in a tonal mess that feels very toothless. While Scarlett Johansson as Jojo’s mom is mostly offscreen covertly resisting, McKensie is left as the sole character to convey a sense of the true gravity of their dire situation in the endgame of a world war. Even little Jojo’s ultimate conversion away from his dark childish delusions feels sparked by budding feelings of romance for a pretty older girl than a broader recognition of common humanity. I’m not saying that I didn’t laugh at times or get swept up in the emotions, but ultimately I was put off by how easily the very serious consequences were instantly set aside so that the film can end with a dance break set to an anachronistic music cue. Typing this out, I feel like a real grinch, but I’m glad it’s landing well with others. I want nothing but the best for Taika Waititi. Maybe I owe it another look.

Chris: For me, I think A Beautiful Day in the Neighborhood might be my favorite movie I saw this past month (and was only able to get in under the wire with a film-heavy final weekend of the month). I definitely preferred the Mr. Rogers documentary, Won’t You Be My Neighbor? to the feature with Tom Hanks, but found a lot I really admired here. Tom Hanks is great, and I think really channels Fred Rogers in the role. The movie is less about Mr. Rogers than about the friendship he forged with Esquire writer Tom Junod (whose profile is one of the best pieces of journalism I’ve ever read). It was a sweet and nice movie and when I walked out of the theater, I had no interest in tweeting to Pete Buttigieg that he sucks for at least an hour or two.

Josh: I keep meaning to see it, but the mood to go weep for a couple hours in a theater just hasn’t struck. Your endorsement might just be the motivation I needed. Any excuse to step away from rage-tweeting is a good one during this holiday season.

Morgen: I can’t improve much upon Chris’ thoughts on A Beautiful Day, but I will add that I sobbed most of the film. Not because of the contents of the movie (though it was a great story), but because the re-enactments of Mr Rogers, who he was and what he did for us all, brought back all the wonderful memories I have of him and what he’s meant to me. I haven’t steeled myself enough to watch the documentary yet. I’m in an incredibly sappy mood right now so maybe when I’ve watched a bunch of action flicks and feel all hyped up, that’d be the best time to go all in on the doc.

Josh: It seems strange not to talk about one of the year’s biggest (and longest) awards contenders; so I’ll go ahead and use my pick to mention The Irishman. Scorsese marshalled Netflix’s vast resources to make an epic memory play enabled by untold computing power that manipulates the faces of his longtime favorite actors to play the same characters across decades. In the title role, Robert De Niro portrays Frank Sheeran, who, through twists of luck, loyalty, and a lack of sentimentality regarding targeted murder, ascends from a humble delivery truck driver to a powerful hitman. His navigation of the contentious intersection of organized crime and labor finds his loyalties stretched between Russell Bufalino (Joe Pesci, exceptional in a deeply dimensional performance of enigmatic potency to elegiac decay) and Teamster boss Jimmy Hoffa (a brash and outsized turn from Al Pacino who really goes for it, accents be damned).

The story rambles through multiple framing devices: a retirement home retelling of a cross-country road-trip gives way to recollections of fortuitous first meetings, criminal capers, interests aligning and diverging, and hubris turning deadly. These personal stories, in turn, reflect on political upheavals and shifting alliances over the course of U.S. history.

If I have a complaint, it’s that the digital de-aging technology isn’t quite good enough. Faces, particularly in the earliest parts of the chronology, looked spookily unnatural and were grafted onto bodies of men who nevertheless moved like senior citizens. Because the story flits across decades, often in quick succession, I was never quite sure exactly when anything was supposed to be happening or how old anyone was supposed to be at a given time. Eventually, though, I surrendered to be film’s rhythms and enjoyed the emotional gestalt.

What I appreciated most was how the film felt like Scorsese reckoning with his previous glamorization of violence. While there are no shortage of great performances, arguments, conversations, and confrontations, and impeccable camerawork it’s not as if any of the deadly business seems especially fun. Minor players are frequently introduced with captions telling the exact time and mechanism of their eventual, usually gory, demises, underscoring the senselessness of it all. Further, the major underlying theme is the corrosive effect of Sheeran’s involvement in these dueling worlds on his family life. Early scenes find him exacting brutality on neighborhood transgressions, later his prolonged absences perpetuate distant relationships, all culminating in a quietly devastating performance from Anna Paquin, in a nearly wordless role. And, after hours of skipping boldly through colorful history and self-mythology, the narrative slows for a stark coda of old men in prisons and retirement homes. It feels funny to say that a three and a half hour movie can sneak up on you, but somehow that’s exactly what Martin Scorsese did in expertly juggling this sprawling story into something that you can easily sink into and enjoy. I was truly surprised at how moved I was when it reached its final frame. (☆☆☆☆)

I’m glad that I took the time to see it in the theater and let it all wash over me, but it’s on Netflix now for everyone to see, meme, and split into episodic chunks if they don’t have the fortitude to experience it in a single sitting. I’m looking forward to hearing your takes once you find the time to watch it.

(Those who want the cinematic experience can still drive up to the Crest, where it has to be one of the better ways you can spend $4 at the movies.)

Chris: I had a fondness for Motherless Brooklyn, Edward Norton’s long-anticipated adaptation of Jonathan Lethem’s novel. Norton uses the novel as an outline while also adding in The Power Broker by Robert Caro as another primary source, creating a Robert Moses-like character hellbent on transforming New York into his image. The character is even named Moses (Randolph, and he’s played by Alec Baldwin). It moved at a good pace and I really enjoyed how Norton played Lionel, a PI with tourette’s that’s smarter than impression he gives off. It’s not a perfect movie – there might be one or two too many double-crosses, but it’s a nice addition to the gangster genre and there are a few minutes of pure beauty.

Josh: Yeah, it felt a bit stagey for my tastes, but I could tell that it was a real labor of love. You already mentioned Ed Norton’s all-in performance, so I’ll mention another one that surprised me. I’ve long grown tired of Alec Baldwin’s (bad) Trump impressions on SNL, but enjoyed him hamming it up as the Robert Moses figure, channeling all of the power-madness and pontification into a convincing combination of the intersection of underlying competence and buffoonish ambition. It’s all part of an extremely polished production that modely adheres to genre conventions; once I surrendered to what the movie was trying to do, I mostly enjoyed it.

Morgen: I also want to mention a film that I just brought up in last week’s releases. The Body Remembers When the World Broken Open was a raw, real-time, uncomfortable and telling story of the realities of being a woman. Regardless of race, this will speak to you in a primal way, digging into an open wound you thought long-healed whether you’ve experienced abuse or simply love someone who has (because it’s most likely at least one, if not both). Admittedly, I want to add a huge trigger warning label on this film, it may be too much for some, too close to home.

One very important role of The Body Remembers is bringing light to a chilling fact: “One specific population is at a significantly higher risk for domestic violence than others: Native Americans.” It also lays bare the reality of this situation, not everyone is ready to get help, but we have to try. We have to show those in need that they have someone that cares, even a stranger on the street, even if they don’t want the help. You have to start somewhere.