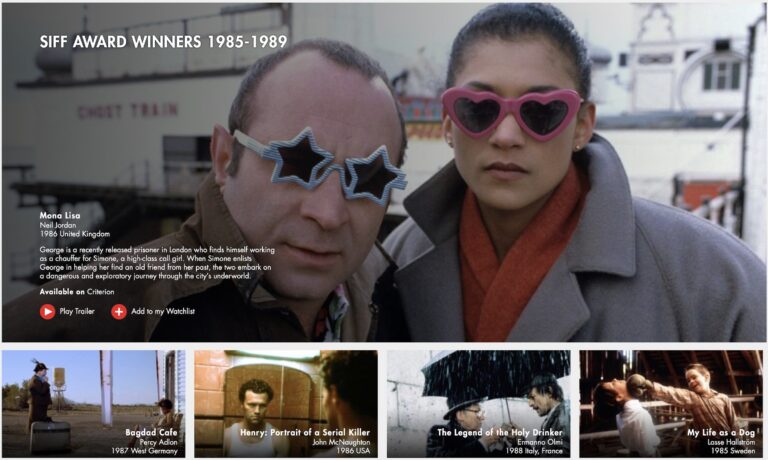 In another timeline, this would have been the opening weekend for the Seattle International Film Festival. We’d all be buzzing over the Opening Night film and brushing the away the mental fog from a fun night of drinks, dancing, and conversation at the celebratory gala at Seattle Center, strategizing about the best schedule to make the most of the twenty-five day marathon of cinema filling the city with exciting special guests and viewing opportunities. So, instead of a traditional opening night welcome at McCaw Hall, SIFF’s Artistic and Executive directors (Beth Barrett and Andrew Haines) issued a special message via YouTube and we’re understandably staying home and staying healthy.

While it stings to think about what we’re missing, Telescope Films has curated an impressive SIFF retrospective as an alternative to wallowing in disappointment over the lack of festival fare headed our way. It’s a great resource for revisiting the highlights of SIFF’s storied past, highlighting the many films honored by the festival over its first forty-five years. In addition to reminding you of all of the wonderful movies that claimed Golden Space Needle awards through audience affection or that earned recognition from juries of their peers, the site provides links to where they’re streaming so that you can fire up your own favorites and watch from your own home cinema.

SIFF’s virtual programming also looks like it will be getting into the nostalgia game, bringing recent festival favorites like Driveways and RBG to their online viewing menu, with rentals of these films bringing much-needed support to organizations in need during this pandemic.

Elsewhere, Northwest Film Forum brings the Children’s Film Festival Seattle (which also had to take a Covid-pause) online so that you and the kids can gather ’round the digital video device of your choice to enjoy seven short film programs and one award-winning feature film (Supa Modo). Family-friendly programming runs through Sunday May 17.