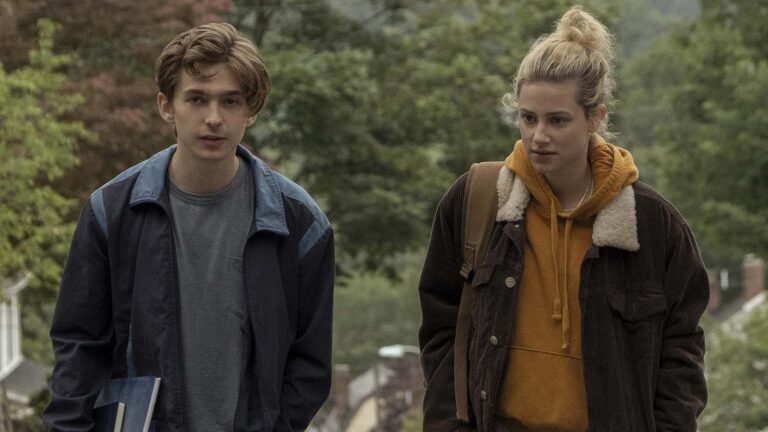 One of the strange side effects wrought by the ugly shadow of COVID-19 is how vividly it’s amplified my emotions.

I’m not the only one, of course. Minor nuisances that’d barely merit a blink in pre-Coronavirus times feel like body blows. Something as simple as a clandestine hug from another human being feels like the most glorious of epiphanies. And even the most insignificant situations feel like earmarks of a world poised to disintegrate in catastrophic fashion.

We’re all in a state of flux these days—one that frequently (and unexpectedly) puts even ostensibly rational grownups into a near-operatic emotional state on par with the all-or-nothing storminess of adolescence. That means that the right piece of creative art can hit you more deeply and profoundly than it ever would have during so-called normal times.

Maybe that’s why Chemical Hearts, the sophomore directorial effort from writer/director/actor Richard Tanne debuting today on Amazon Prime, connected with me so deeply. Then again, maybe not. Teen romance/coming-of-age movies are so abundant, and so often marginal to lousy, it takes a lot for one to even make an impression. Chemical Hearts may tick a lot of familiar boxes, but at its best (which is a good 85 – 90% of the time) it works a genuine, winsome low-key magic all its own.

The film revolves around Henry (Austin Abrams), an intelligent and slightly gawky high-school senior tasked with co-editing the school paper alongside newly-arrived transfer student Grace (Lili Reinhart). Quiet and terse, Grace traverses the halls of the school with a cane, a limp, and a hearty sense of misanthropy. She’s enigmatic, flinty, and caustically brilliant, and it doesn’t take long for Henry to become smitten with her.

From there, not a lot happens in Chemical Hearts per se. The story largely bypasses the conventional forward momentum of an adolescent drama: You won’t find any high school bullies or abusive parents stoking manufactured conflict, nor some big school dance providing some magnetic catalyst for the finale. It focuses instead on the blossoming friendship between Henry and Grace. Henry, a virgin, begins finding voice for his doubts, insecurities, and romanticism in Grace’s orbit. Grace, in contrast, is a tougher nut to crack. Most of the movie’s tension generates organically, as much from whether or not Grace will be able to rejoin the human race, as from the eternal will-they-or-won’t-they conundrum of teen romance.

Good as it is, Chemical Hearts isn’t quite a complete home run. However well-executed and atypical its route, this is still a teen romance that ultimately follows a formula path. And most of the other characters surrounding Henry and Grace, appealing and genuine as they feel, are sketched a bit too vaguely to make much of an impression.

When it focuses on its two would-be paramours, though, Chemical Hearts really connects. Tanne’s screenplay (adapted from Krystal Sutherland’s novel, Our Chemical Hearts) has a real handle on the little things that draw smart, square-peg human beings together in friendship and romance. A movie like this also hinges on the chemistry between the two leads, and Reinhart and Abrams possess that X factor in spades whenever they share screen time. Abrams channels Henry’s awkwardness, sharp mind, and search for identity with such naturalness it’s easy to forget he’s acting, while Reinhart imbues Grace with enough layers to make Henry’s growing fondness for her utterly understandable and inevitable.

Chemical Hearts also possesses a winning but refreshingly sincere self-awareness. It opens with Henry’s offscreen narration acknowledging the intense, heady, and transitory nature of teenage emotions in general. It’s a simple gesture that acknowledges the absurdity and mythic quality that go hand-in-hand with any cherished memory from adolescence. And in a world reeling from a global pandemic, Chemical Hearts’ low-key sweetness, smarts, and heart-on-sleeve abandon feel surprisingly resonant, like the most welcome of temporary escapes from the ugliness of the world. Maybe that’s just how it hit me. Then again, maybe not.

Chemical Hearts is available this weekend exclusively on Prime Video.