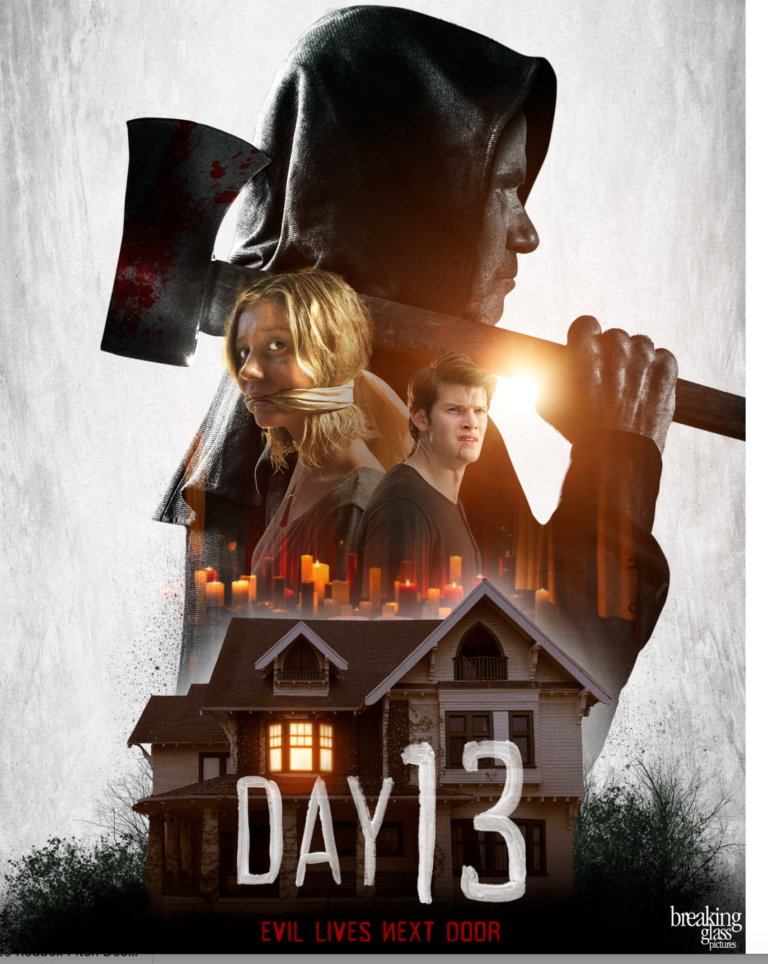 Full disclosure, and no surprise if you read this website with any regularity: I’m a hardcore horror fan to the depths of my cold, black heart. And it’s part of the job description to know and embrace cliché as thoroughly as you know and embrace getting scared shitless.

This often leads to an interesting paradox. The genre is one that thrives on surprise, shock, and transgression, yet its laundry list of tropes can also serve as strangely quaint comfort food for horror hardcores.

Day 13 (which recently began streaming on multiple platforms for rent and purchase) breaks no new ground. Nor does it boast any big scares, despite director Jax Medel’s earnest efforts. The path to its denouement is so predictable that you could set a wall clock to it. And your mileage will vary wildly, depending entirely on the level of blandness you’ll accept from your genre-cinema comfort food.

Suburban teenage kid Colton (Alex MacNicoll) is left in charge of the house and his bratty kid sister Rachel (Meyrick Murphy) when mom leaves for a vacation. One afternoon, new neighbors move into the house across the street—an introverted teenage girl named Heather (Genevieve Hannelius), and her foster father Magnus (Martin Kove).

After an awkward introduction, sparks ignite between Colton and Heather. But soon after the chemistry kicks in, Colton begins noticing that Heather’s a veritable prisoner in her own home. Worse yet, her guardian’s displaying the disconcerting habit of walking in front of the house’s open windows in a hooded robe, brandishing a dagger and looking like he’s preparing to sacrifice something—or someone—in the house.

In case you haven’t surmised already, Day 13 follows a well-trod pathway of influences. Colton’s obsession with Heather manifests itself in the form of a gaggle of surveillance equipment he uses to voyeuristically scrutinize the house across the street, Rear Window style. The screenplay also ropes in elements of devil worship in seemingly mundane surroundings  a la Rosemary’s Baby. Visual bows to a metric crap-ton of modern horror flicks, from The Conjuring to Silent Hill, likewise bob forth.

There’s nothing wrong with hitting familiar notes in a horror movie, of course. Day 13’s also lucky to have a couple of appealing leads in the form of Transparent veteran MacNicoll, who mostly succeeds at the thankless task of making his not-too-bright creeper of a hero likable, and Hannelius, who hits Heather’s combination of awkwardness and ethereality effectively.

But screenwriters Dan Gannon and Walter Goldwater mash the cliché buttons so hard, it’s a wonder they haven’t broken multiple fingers (the only reason JT Palmer’s supporting character isn’t named Token Wisecracking Black Guy is because the name Michael had fewer syllables). And it doesn’t help that most of the story’s forward momentum hinges on its characters doing, or unquestionably accepting, Dumb Movie Character Things. Visually, the movie’s also a mixed bag, with Medel’s occasional atmospheric flourishes getting kneecapped by Adriaan Kirchner’s murky and too-dark cinematography in a couple of pivotal scenes.

Day 13’s too beholden to genre business as usual to really surprise. But at least it crams its not-so-surprising twist ending with flying glowing-eyed demons, explosions, and apocalyptic plumes of ash, flame, and wholesale destruction. And while the movie doesn’t do nearly enough with him, it’s nice to see character actor Martin Kove (everyone’s favorite Karate Kid heavy) get a chance to glower and deliver exposition with some welcome gravitas. Kove’s presence, and those last three batshit minutes, add some spice to this otherwise comfortable but kinda flavorless bowl of horror movie oatmeal.