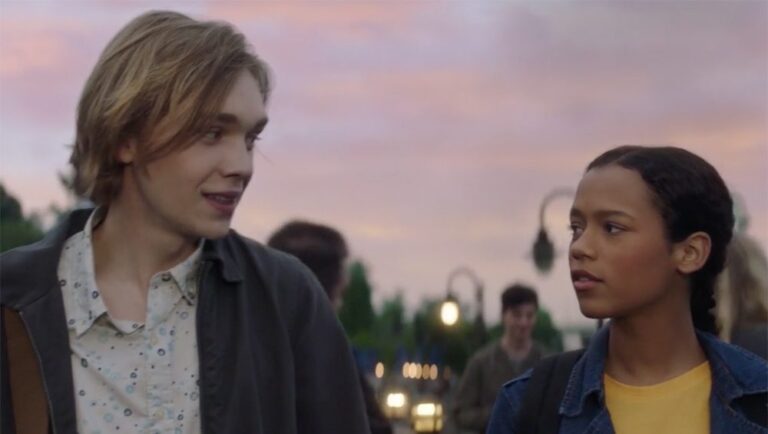 Words on Bathroom Walls attempts to explain the unexplainable: what it’s like to realize and then deal with the fact that you have an incurable mental illness.

Adam (Charlie Plummer), our protagonist and a socially distanced and quietly sweet high school senior, finds that cooking is the only thing that calms the demons constantly harassing his sense of self. It’s the only time his mind is quiet, focused. When these voices come calling it’s in the form of a crunchy space cadet of a young woman named Rachel, a jogging suit-clad mob boss with a violent demeanor, and a dirty-minded young dude called Joaquin always donning a bathrobe and little else. While they represent parts of his psyche, more alarmingly they’re a sign of his ongoing battle with schizophrenia. As with any kid his age, he tried to hide it, to disastrous results.

Starting fresh at a new school was his doting and loving mother’s answer (along with putting him in every drug trial imaginable looking for a cure), and that’s where he meets Maya (Taylor Russell). Struggling to put food on her family’s table, the stubborn and loyal young woman can’t help but fall for our boy. They start a love affair just as one of these medical trials seems to be helping Adam’s issues for the first time since they began. You have hope, but just as with every YA story, there has to be a dramatic twist so they can make the confessions of love at the end that much more powerful.

Admittedly I was pulled into the drama of it all, I mean that’s half the reason you watch these films in the first place. You know what you’re getting into, so don’t deny it. While I haven’t read the book on which this film is based, I get the sense that the on-screen version was softened around the edges, as these kinds of films often are. What I wanted to find, and unfortunately this film falls short, is a realistic view of being schizophrenic to begin cutting through the stigma of mental illness.

The current generation of younger viewers is dealing with a lot these days but they seem to be made of tougher stuff than we give them credit for. They’re more progressive (as these things go), more open-minded, and they definitely want the truth handed to them way more than us kids of the ’80s ever did, no matter how hard it is for them to hear. I think this film is a great step toward debunking myths about dealing with mental illness and revealing the intense struggle that they must face every day… but the ending made it seem like love was the answer; the key to becoming healthy. As long as you find someone to love you unconditionally (which is incredibly hard in and of itself without throwing mental illness in the mix) then it’ll all be ok. The truth is, it really won’t, and we should be OK with that too. The world isn’t perfect and being a kid, being a teenager, being a young adult, and hell, even being an adult is hard.

Then again, what do I know? Maybe sometimes we just need a movie that ends on a sweet note. But if you’re going to tackle something as sticky and painful as mental illness, be prepared to get your hands dirty… let’s go into that darkness together so we can become more empathetic and understanding people.

Words on Bathroom Walls is available this weekend exclusively on Prime Video.