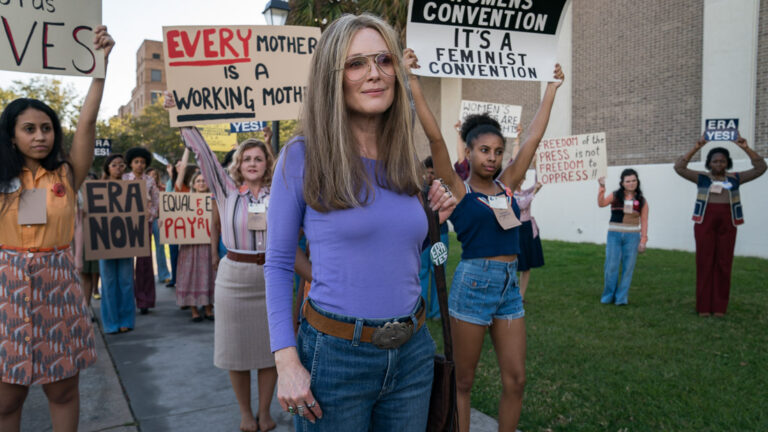 The first scene of The Glorias, a regrettable biopic from director Julie Taymor about feminist legend Gloria Steinem that is now streaming on Amazon Prime, opens with Steinem entering a biker bar, wearing her cool aviatior shades. She’s approached by a tough looking couple, he looks like he’s almost certainly a Hell’s Angel and she looks like she’s married to a Hell’s Angel. Mrs. Hell’s Angel tells Ms. Steinem that she used to ride motorcycles behind her husband until she read Ms. magazine, and now they ride together. The scene made me chuckle partially because Gloria Steinem herself made headlines a few years ago for insulting women for participating in an actual left-wing movement. Nothing about the scene felt authentic, but an effort to establish its hero as cool and a woman of the people in the opening minutes. It’s not the dumbest scene in The Glorias, or the most ham-fisted, but it is, unquestionably, the first.

I don’t think anyone has done more to normalize feminism than Gloria Steinem. She’s an amazing and accomplished woman by any objective measure. If anyone is deserving of a 137 minute biopic with four different actors (Ryan Kiera Armstrong, Lulu Wilson, Alicia Vikander, Julianne Moore: all excellent!) playing the hero, it’s Gloria Steinem, yet I wouldn’t wish this strange, and bad, movie upon Kayleigh McEnany.

Whether it’s Steinem going undercover as a Bunny to write about how women are treated at Playboy Clubs, or arguing with sexist editors who want her to write less substantial pieces, every scene feels like it was crafted to annihilate a straw man at the behest of Twitter crowds. “I want to write about why masculinity means leading and femininity means following,” she says to one editor. In another scene, her father (Timothy Hutton) tells Gloria he likes her fiancé even though he’s “not as smart as you,” but she says she’s not going through with it for a writing assignment. He approves.

Every scene follows a similar pattern: Steinem encounters a sexist slight and she demolishes it. As a feminist, it’s very satisfying, or it would if it didn’t feel so forced. Another scene has her arguing with an editor, “You don’t want to associate yourself with those crazy women; I just realized, I am one of ‘those crazy women.’” Another scene has Steinem shutting down a fellow airplane traveler who said breastfeeding belongs in the privacy of a restroom.

Julie Taymor is a high-profile director who made a fine film in the biopic Frida (where Salma Hayek played Mexican artist Frida Kahlo) and has since helmed the troubled Spider-man Broadway musical that was marred by a surprisingly high number of on-set injuries. Here, she feels unprepared for a film of someone whose life was bigger than a bunch of sexist remarks that she had no problem smacking down. There are some great moments, including a really cool dream sequence where Steinem is caught up in a Wizard of Oz tornado. I also appreciated that Second Wave feminism is depicted here as more diverse than it gets credit for. And the acting is outstanding across the board, even if the dialogue is just not good.

I really was hoping to learn more about Steinem’s legacy and the woman herself, especially because the movie is so long, instead there were a lot of lines like “All the magazine people say not to do a lesbian story in the first issue, so I feel like we need to do a lesbian story in the first issue.” I wanted to understand how she thinks but instead it was platitudes over and over again. Standing up to the Man, for sure, but hardly illuminating. There is a great movie to be made about the life and times of Gloria Marie Steinem, this just isn’t it.

I have a lot of respect for Gloria Steinem and she’s one of the few living figures who can say with a straight face that they unquestionably influenced the world for the better, and any opportunity to watch Julianne Moore act should not be squandered, but if I wanted to watch “one epic clapback against the haters” after another, I’d read Upworthy.

{The Glorias is now streaming on Amazon Prime.}