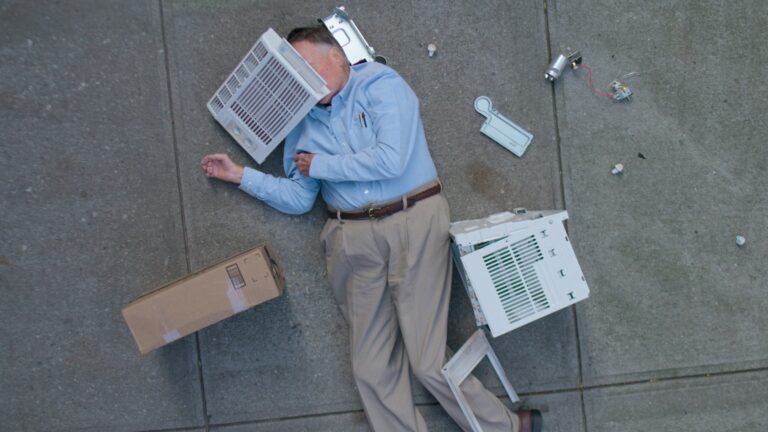 Kirsten Johnson is a cameraperson, her father Dick is a Seattle-based psychiatrist. At age 86, as he was closing his practice and preparing to move in with her in New York, he agreed to make a movie with her in which they’d explore his inevitable demise. Although she’s been making documentary films for decades, this one involves a degree of invention: stuntmen staging violent accidental deaths like an air conditioner to the head or a gory run-in between a steel beam and her father’s tender neck. They imagine a funeral in a Green Lake church, his friends visibly rattled by the sight of him nestled inside a $666 spartan coffin, and a glorious afterlife complete with feathers, glitter, dancing, feasts with luminaries, and miraculous physical transformation at the hands of Jesus himself. Through it all, Dick’s obvious love for life and eagerness to participate in the production conveys the depth of the father-daughter affection and dedication to each other. All of this morbid whimsy, though, is less an obfuscation of the grim days ahead than a sideways entry into a living biography that captures his final years (the so-called “beginning of his disappearance”) spanning family beach vacations, visits with old friends, all while documenting his steady mental and physical decline and the effect on their lives. It’s all at once a celebration of a family, a behind-the-scenes documentary about the making-of the movie itself, and an experiential therapy exercise in impending grief captured as it is happening in real time that is all at once tender, funny, clear-eyed, and moving to watch. We’re privileged that the Johnsons elected to share it with all of us.

Dick Johnson is Dead is now streaming on Netflix.

In local virtual cinema, SIFF launches their annual French Cinema Now programming as an extended mini-festival running through January 2021. The at-home event highlights nine recently-released French films curated by the SIFF programming team, bringing a slate of emerging directors and established masters to a home audience. They also add a couple of new documentaries to their extended library. Herb Alpert Is … about legendary Tijuana Brass trumpeter including interviews, archival footage, and even a pre-recorded Q&A with Alpert. Constructed from 80 hours of conversations with family and friends, Oliver Sacks: His Own Life finds the renowned neurologist reflecting on his life, his work, and his wonder at the world in the wake of a fatal diagnosis.

Northwest Film Forum partners with the Social Justice Film Institute and Meaningful Movies Project to present this year’s Social Justice Film Festival. Collected around the very appealing premise of “Transform: Another World Is Possible”, the festival is organized into twenty-five thematic blocks of short films spanning various domains of justice. Most blocks are broadly available outside the pacific northwest and can be viewed via individual tickets or a sliding-scale full festival pass.

Looking ahead: this week Three Dollar Bill Cinema revealed the full program for this year’s Seattle Queer Film Festival (October 15-25) and the annual North Bend Film Festival announced their consolidation with four other genre film festival to unite under the banner of Nightstream to bring together more than 40 features, 160 shorts, and 20 panels and events online to a national virtual audience (October 8-11). Tickets, passes, and badges for both events are now available.