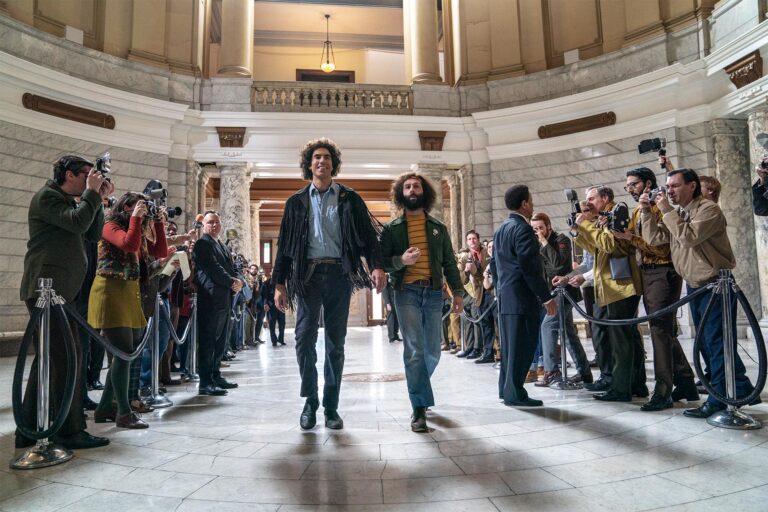 I don’t think there’s a television program I hold in lower regard than Aaron Sorkin’s The West Wing, a liberal fever dream and a revisionist history of the Clinton administration that inspired a generation of nerds to join the Professional Managerial Class and made Bradley Whitford a celebrity. While the right was conspiring to take over every facet of government, centrist liberals were inspired to enter politics by a show that let a thousand Pete Buttigiegs and two thousand College Democrats of Massachusetts blossom so that some lanyard dork might be referred to as the gentleman from somewhere while trying to make healthcare more expensive and unwieldy in the name of “good government.” No thank you.

I stipulate my bias and my hottest take to talk about Aaron Sorkin’s newest political project, The Trial of the Chicago Seven, which just debuted on Netflix, and that I found it to be great. It has such a rich cast of characters played by a first-rate cast, like Tom Hayden (Eddie Redmayne) and Abbie Hoffman (Sacha Baron Cohen). It’s a fun movie to watch, mostly because it looked like a fun movie to make, and should have a lot of resonance with liberals who now see protest as patriotic.

Sorkin writes and directs this prescient film about the aftermath of the 1968 Democratic National Convention, where protests against the Vietnam War turned into riots because of the overzealous Chicago Police Department.

The movie opens with prosecutor Richard Schultz (Joseph Gordon-Levitt) being summoned to meet with Attorney General John Mitchell. Mitchell, one of Richard Nixon’s most influential enablers, is fuming that LBJ’S AG Ramsey Clark (Michael Keaton) didn’t resign at the proper time, and he wants a very public prosecution of eight activists to show that dissent will not be tolerated, after knowing Clark had previously cleared the activists of causing riots in Chicago.

When we meet who the Chicago Seven/Eight are, the movie starts to find it’s footing. Jerry Rubin (Jeremy Strong), Abbie Hoffman, Rennie Davis (Alex Sharp), David Dellinger (John Carroll Lynch), John Froines (Danny Flaherty), Lee Weiner (Noah Robbins), and Tom Hayden are the seven. The eighth member is Bobby Seale, a Black Panther tied in to add a scary black man to further scare the mostly white jury. Seale is played by Yahya Abdul-Mateen II, and he’s outstanding in the part. Seale was different from the other defendants, not just because he’s black but also because he wasn’t represented by the famous civil rights lawyer (and my hero) William Kuntsler, instead, his lawyer was sick and Seale was forced to endure being tried without representation and was even denied the right to represent himself. When his (righteous) claims of unfairness became too much the malevolent judge (Frank Langella), he ordered Seale bound and gagged. That was even too much for Gordon-Levitt’s Schultz, who asked for, and got, a mistrial against Seale.

There are so many fascinating elements of this large-scale biopic, like the tension between the more radical Hoffman and the pragmatic, clean-cut Hayden. Another is the judge, Julius Hoffman (no relation to Abbie, he stresses more than once, to which Baron Cohen replies “Father, nooooooo”), who has no interest in granting the Chicago Seven a fair trial, even going as far as disallowing Ramsey Clark’s testimony that said his Department of Justice concluded the Chicago PD started the riots and not the defendants on trial for starting them. I dunno, seemed relevant to me. Curiously, Sorkin’s script leaves out that Arlo Guthrie, Judy Collins, Phil Ochs, and Allen Ginsberg all testified for the defense. The trial took six months to complete but those luminaries would’ve added to the buried idea that there were prominent supporters of the Chicago Seven.

The Trial of the Chicago Seven worked for me for the same reasons The West Wing repulses me. Sorkin has a tendency to make every speech stirring, every character witty and profound. He took several liberties with the facts in the name of a zippier script (Jerry Rubin wasn’t seduced by an undercover, female officer, for example, and Rubin was certainly less of a doofus than the Jason Mantzoukas character he looks like here). Maybe because I view protesting war as more righteous than, say, crafting an agriculture bill full of ethanol subsidies, but I found this new movie to be a journey I wanted to take. Moreover, Sorkin had no way of knowing we would be spending 2020 watching (or taking part in) protests every night, with similar results, when he made this excellent movie.

It was also alarming to realize how little police have learned since 1969. There are some things to learn and this is the type of movie, a 1960’s costume drama with political resonance, is exactly the type of movie Oscar voters love to reward. I also think it could be something liberals find hopeful and inspiring before the election.

The powerful ending, where Hayden read the names of every American service member killed in Vietnam as a statement before sentencing, was deeply moving, but historically inaccurate. It still made me want to stand and show my respect, too.

The Trial of the Chicago Seven is now streaming on Netflix.