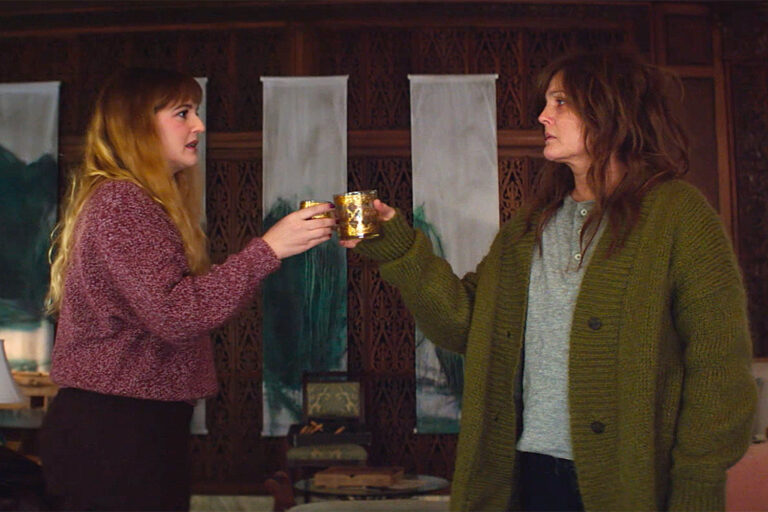 I really think Drew Barrymore is one of the great comedic actresses of my generation. And in her newest movie, The Stand In, she acts against herself for most of the movie. I’m sure it was a lot of fun to play two different characters at once, it was just less fun to watch.

She gives it her very best, and damn, she would’ve pulled it off if she just had better material to work with. I was looking for anything to grasp onto because Barrymore was so committed to the bit.

The plot revolves around Barrymore playing a washed up movie star, known for her physical comedy, who watches her career flush down the toilet when she has a meltdown on set and becomes so reclusive she makes Norma Desmond look like Andy Cohen (who does appear as himself in the movie). When Candy Black, Barrymore’s movie star character, is forced into rehab when her “I was too drunk to file my taxes” fails to win over a judge, she has an idea. She’s been cooped up in her house for so long, what if her overly eager stand-in went to rehab in her place? How would anyone notice?

“Paula” is the stand in, and her acting career has floundered since she lost the steady paycheck that comes with shadowing Candy. She’s been living in her car, so getting her to go to rehab isn’t exactly a hard sell. Paula takes the gig on the promise that Candy takes another acting gig so that she can be her stand-in. Candy just wants to make furniture and be with a man she met on a woodworking forum who has his own reasons for escaping his persona.

After rehab, Candy is hesitant to fulfill her promise to Paula, so Candy agrees to let Paula take on Candy’s public persona. Surprise, she’s far more likeable than Candy ever was. She apologizes for all of her mistakes and, of course, everyone loves it. She’s the talk of all of the talk shows (Fallon, “Kelly and Ryan,” the aforementioned Andy Cohen). When he learns the truth of the “new Candy,” her agent (someone gave T.J. Miller some work) even chooses the one who makes money and shows up on time.

The movie just comes across as mean-spirited, which might be fine if there were more (any?) laughs. Instead, you see the protagonist diving head first into a pile of cow shit. I wish I meant that metaphorically.