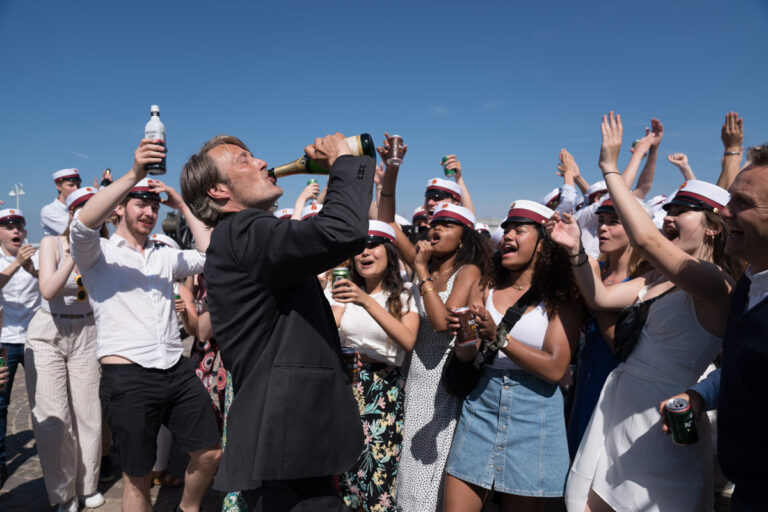 That someone at a studio changed the original title of Thomas Vinterberg’s story of an experiment by four middle-aged teacher friends to shake up their lives from Druk (which Google tells me means: “binge drinking”) to Another Round says a great deal about the vast chasm of sociocultural perceptions of alcohol use (and/or abuse) between Denmark and the United States. The movie opens with scenes of intoxicated teenage energy — beautiful young Danes chugging beers in footraces around a picturesque lake, pulling pranks on public trams, blissfully blitzed at an age where hangovers are a headache and not a lost day of misery. It’s a sharp cut, then, to the dreary teacher’s lounge where a pragmatic principal informs the staff of their charges’ misadventures and suggests that maybe things are getting a bit out of hand.

In an American production, one might expect a movie-of-the-week about the dangers of alcohol. Instead, the openly acknowledged public drunkenness of the students basically gets swept under the rug like any other administrative notification and Vinterberg moves the focus to a history teacher played with the weight of at least a decade of ennui by the tremendous Mads Mikkelsen. He’s grown so bored with his life that even the party animal students are complaining that his lack of engagement might cost them a good score on their senior year exams and prospects for college placements (another reminder that the US and Denmark are very different countries). Later, middle-aged male conversation at another teacher’s fancy fortieth birthday party dinner (complete with a vulnerable, if glassy-eyed, confession of dissatisfaction with the course of one’s life) turns to psychiatrist Finn Skårderud and his theory that maintaining a blood alcohol content of 0.05 (a smidge under our legal limit for driving) makes people more creative and relaxed. Under the influence of caviar and vodka, the four men decide to make an experiment of it and document their findings.

The prospect seems ripe for disaster, and it was difficult to watch these men making their way through the schooldays sneaking sips of booze and self-breathalyzing without imagining all the looming tragedies that surely awaited them. But the Denmark of it all results in a far more balanced, if less sober, picture as the experiment plays out with mixed effects on the states of their minds, marriages, and careers. Vinerberg assembled a cast of buddies whose ages and concerns span a couple decades (Mikkelsen is joined by an excellent group of co-stars including Thomas Bo Larsen, Magnus Millang, and Lars Ranthe), gives them room to develop credible chemistry and affection for each other, and mixes the sweet and bitter notes of consequences into a well-calibrated cocktail that goes down smoothly and finishes with a delightful last note of joy.

Another Year is Denmark’s official submission for the Best International Feature Academy Award. It’s streaming through the Grand Illusion’s streaming service through December 31.

There’s much to hate about the pandemic, and while the widespread closure of cinemas and the seismic effects of a massive pivot to streaming on the vast filmmaking industry, ranks far, far, far below the death and economic devastation, it’s still been a bummer for people who love movies. Still, in these dark winter days, let’s not overlook the small miracle of having a brand new Steven Soderbergh movie starring Meryl Streep, Candice Bergen, and Diane Wiest on a boat being beamed directly into the televisions of anyone who’s figured out the difference between the HBO, HBOGo, HBO Now, and HBO Max apps on their AppleTVs. Shot on the actual Queen Mary 2 over two weeks with a minimal crew and loosely improvised around a script by Deborah Eisenberg the film follows a talky reunion of three college friends on a trans-atlantic crossing.

Meryl Streep plays Alice, a Pulitzer-prize winning novelist, whose refusal to fly to England to accept a prestigious literary award inspired her “new” agent (Gemma Chan) to suggest that she travel there the old fashioned way: in an extremely posh stateroom on a grant old luxury liner. Alice somehow leverages this into a group outing, inviting Candice Bergen’s Roberta (more than eager to take a break from a frustrating Dallas life in lingerie sales) and Diane Weist’s Susan (an advocate for prisoners, reluctant to be away from Seattle and her clients for so many weeks, but too curious to say no) to join her on the excursion after decades apart.

Although they meet nightly for dinner, Alice’s work keeps her oddly separated from her old friends for most of the day. While she keeps to her routines — writing, swimming laps at the pool, and breakfasting with her devoted nephew — Weist and Bergen pal around, playing boardgames, gossiping about the past, and marveling at how strange their friend has become. Streep conveys a sense of wistful concern about her legacy and intense care over word choice; Bergen brings a hidden sense of purpose and an ever-present glimmer of simmering resentment in her eye; and Weist seems to have smuggled a few edibles in her carry-on. She’s chill A.F. and if there’s ever a BuzzFeed quiz to figure out which character you are, I know who I’d want to be (and fear an accurate result). Along for the ride are her twenty-something nephew (Lucas Hedges as Tyler, who approaches the trip as something of an anthropological adventure) and, secretly, her agent (eager to find out exactly what’s in Alice’s long-awaited next manuscript).

No one’s complete rationale for being on the trip is immediately apparent, but that’s half the fun. Everyone’s kind of spying on each other on the ship and puzzling through their motivations as they orbits through the grand floating hotel adds a light element of mystery to a charming acting showcase by some of the all-time greats. I’ve always thought of a cruise as a supposedly fun thing I’ll never do, but Soderbergh conducts the journey with a light touch, an ever-present curiosity about the characters as well as the inner workings of the boat, a keen eye for composition, an ingenuity of production, and such sureness of hand that no dramamine was required for the two hours at sea.

Let Them All Talk is now streaming on HBO Max.