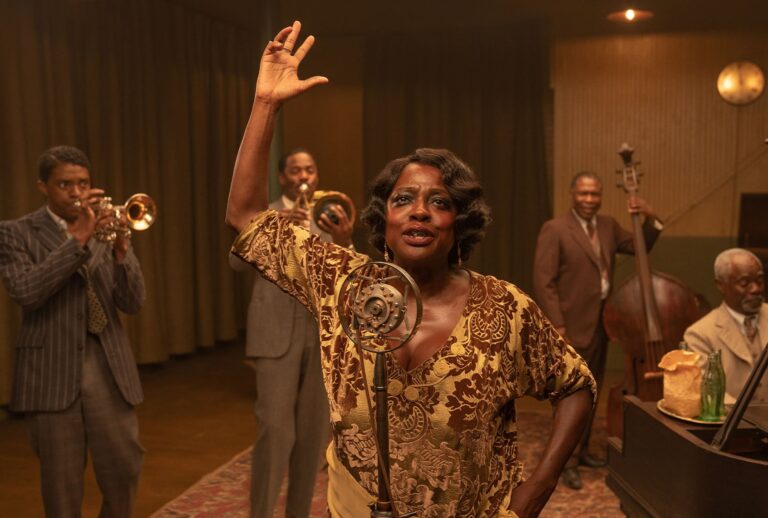 Before the film adaptation arrived on Netflix this past weekend, Ma Rainey’s Black Bottom was a play by August Wilson, the two-time Pulitzer Prize winner (Fences and The Piano Lesson) who died in 2005 after making the Seattle Rep his artistic home in the final fifteen years of his life (the path between SIFF Film Center and the Rep in Seattle Center is named August Wilson Way). Long-time Wilson collaborator Ruben Santiago-Hudson wrote the script for this movie, and he was the director of the premiere of Wilson’s Jitney, which made its debut at the Rep.

The new film adaptation of Ma Rainey’s Black Bottom is a powderkeg of a movie, anchored by two strong performances: Viola Davis is great as Ma Rainey, and the late Chadwick Boseman (who died of colon cancer at 43 this summer) is exceptional as Levee, a cornet player in Ma Rainey’s band (called the Black Bottom) who thinks his skill and ambition will carry him beyond what Ma Rainey can provide. He’s seemingly encouraged by the white record producer Sturdivant to make his own arrangements and he could have a big career in music. The older, and wiser, members of Black Bottom know better. They have been around long enough to know how the racist music industry works, and that they can be replaced easily (I’ve read enough biographies of James Brown to know that’s true). They also know better than to make moves on Ma Rainey’s young, pretty lover (Taylour Paige), but Levee believes his charm can override all of the other factors standing in his way to getting what he wants.

Ma Rainey also knows her place in the music business. She knows that she’ll outsell her other labelmates, and if she were not to sing, the (white) people who make money on her voice would be screwed. She shows up late to recording sessions, demands a Coca Cola before she sings, and insists her nephew with a stutter introduces her on record.

The movie is centered around Levee’s conflict with Ma Rainey because he thinks she’s a stepping stone on his way to bigger things (and he’ll take her girl with him) and his conflicts with the rest of the Black Bottom, who have seen younger, brash musicians who also think their skills can transcend the racism built into the the music business.

There are some outstanding monologues in the film, particularly when we learn about where Levee came from and what shaped him. I can’t stop raving about Chadwick Boseman’s (final) performance here. Looking like the opposite of the buff Black Panther, he’s wiry and skinny. When you watch him act, you see there’s a vulnerability, barely visible, that comes through minutely. Deep down, Levee knows he’s lying to himself, he just overstates his bravado to cover it up. That is until reality catches up to his ego, and then it’s too late. It’s probably the best performance I’ve seen in 2020. It’s also impossible to watch this movie without knowing it is Boseman’s final performance, realizing that the tragic end of the movie is the last time we’ll ever see him in a movie. It was a remarkable end to a remarkable career.