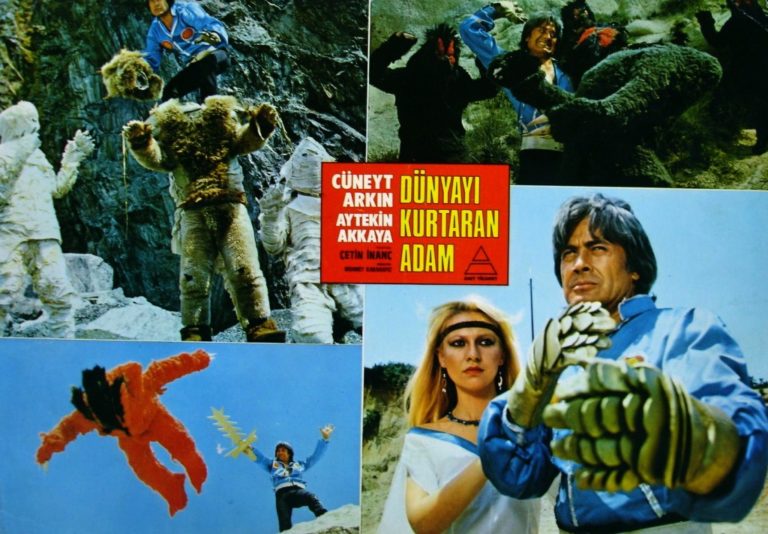 Like most genre-loving geeks worth their salt, I was extremely relieved that Star Wars: The Force Awakens did not suck. J.J. Abrams’ reboot managed a pretty solid synthesis of warm fuzzies and zippy new thrills, with likable new actors playing likable new characters, a mostly-satisfying integration of the original cast, and several action set pieces that play approximately one zillion times better than the expensive but bloodless ‘action’ scenes in the dry, bland Lucas-helmed prequels. It’s an honorable step forward, flaws and all.

But there’s no need for me to throw down yet another review on a 200-million-dollar movie that’s more likely than not going to become the biggest box office hit of all time. I’m a lot more interested in shining a light on a genuine (and genuinely strange) sci-fi space opera underdog, one that’s making a surprising bow on a local movie screen this weekend.

The Turkish epic Dunyayi Kurtaran Adam (English translation: The Man Who Saves the World) was unleashed in its homeland in 1982. Better known to western audiences as The Turkish Star Wars, it’s playing this Friday and Saturday night at the Grand Illusion, and dear Lord in shiny space leotards, is it one certifiably berserk film experience.

Turkish Star Wars represents just one example of an entire run of indigenous pulp cinema that began in the mid-1960s and died out sometime in the mid ‘80s. In the same way that stateside B movies satisfied US moviegoers’ appetites for action, sex, and violence at the time, Turkish pulp cinema provided the same fix for its fans, chewing up Western influences (mainly cliffhanger serials and mainstream Hollywood blockbusters) and spitting them back at audiences at a cheap, rattletrap, high-speed clip.

This surreal sub-strata of international cinema has gained a metric crap ton of notoriety among cult-movie fans, largely due to its jaw-dropping penchant for flagrant pilfering. Enough digging into bootleg websites and YouTube will yield Turkish knock-offs of ET, The Wizard of Oz, Superman, Star Trek, The Exorcist, and nearly every other stateside hit movie of the era. All of these, um, sincerely-flattering variations share an MO of transparently imitating their sources through a skewed and hilariously cheap lens, but Turkish Star Wars represents the zenith (or if you’re a cynic, the nadir) of the approach.

Opening with establishing narration so convoluted that the English subtitles read like Frank Herbert being repeatedly pounded with a tire iron, Dunyayi Kurtaran Adam follows two Turkish space fighter pilots, Murat (Turkish action star Cuneyt Arkin, who also wrote the script) and his faithful buddy Ali (Aytekin Akkaya), as they take on the forces of The Wizard, an evil-emperor type who favors snazzy robes and a headdress of gold shish kabob skewers.

The heroic duo is shot down and marooned on a remote planet that houses one of the lost tribes of Earth (at least I think that’s what’s going on). Along the way, The Wizard unleashes suspiciously well-fed skeleton warriors, fuzzy man-sized muppet monsters with claws, Wal-Mart budget Cylons, tattered mummies, and numerous other threats to menace the heroes and the sleepy tribespeople they’ve decided to protect.

All of the above represents just a fraction of the anarchy on display, all pitched at a pace that’d have Michael Bay reaching for the dramamine. The final 15 minutes, in particular, fire off a melange of action, cartoon violence, and stock footage so delirious in its incoherence that it approaches subversive genius.

Seeing this on a big screen is the rarest and strangest of exotic treats. And with Disney now holding the rights to the Star Wars saga in its white-gloved Mickey Mouse iron fist, this copyright-defying Turkish middle finger of a movie could soon go the way of Obi-Wan Kenobi after a tussle with Darth Vader. To paraphrase Yoda: See it, you must.

[Tickets for Turkish Star Wars are going fast, and can be obtained at the Grand Illusion’s website.]