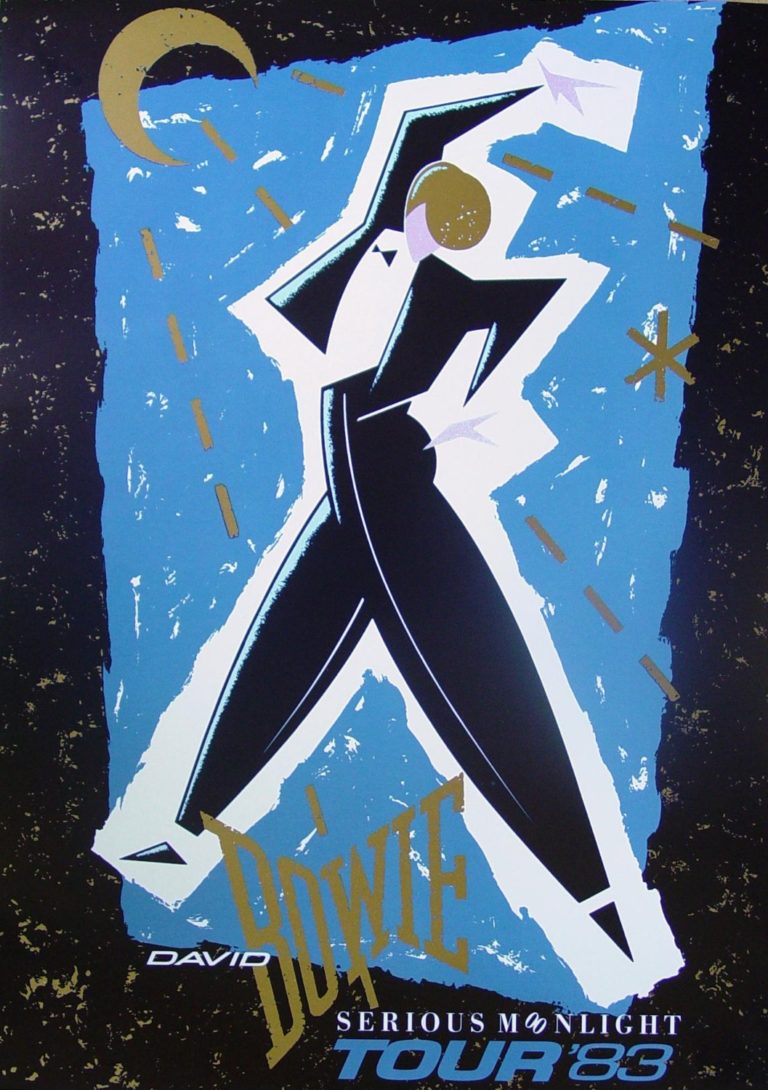 I’ve heard some amusing horror stories about first rock concerts from a lot of people. Whether it was a well-intentioned parent dragging a child to some godawful yacht-rock show, or embarrassment over a front-row seat at a third-rate boy-band extravaganza, a lot of first-time live music experiences become a giggly footnote at best, a source of outright shame at worst.

I was lucky. David Bowie took my live-music virginity when I was 16. It’s something that I’ve never taken for granted. And, yeah, it changed my life.

It was 1983, and Bowie’s Serious Moonlight tour landed at the Tacoma Dome. I had already been gravitating away from the mullet-rock and mellow AM pop that served as the accidental soundtrack of my grade-school years, and the alien thrill of punk rock and new wave beckoned. The journey of actively seeking out unusual sounds had begun for me, and in that packed arena I’d found the captain of that expedition onstage, making a pastel suit and suspenders look like the epitome of timeless cool.

Bowie was only in his mid-thirties at the time, but he was already a 15-year rock and roll veteran whose musical personae had metamorphosed at least five times within the preceding ten years. He was touring behind Let’s Dance—his big, handsome, sleek Cadillac of a 1983 pop record. Those tunes proved to be a perfect gateway drug for new converts—confident, hooky, but with a distinct and sharply-intelligent authority at work under its shiny surface.

Great as the live renditions of the Let’s Dance cuts were, though, it was the deep dive into Bowie’s back catalog that made those two hours in that arena so life-changing. I’d heard a few of the singles on the radio before (“Fame,” “Space Oddity”), but the material from his mid-to-late ’70’s records—equal parts ambient futurism, jagged edges, and world-class guitar riffs—sounded more adventurous, dangerous, and cool than anything on the radio at the time.

Watching Bowie work a stage was a masterclass in rock theatricality. Even in this more buttoned-down phase of his career, he mesmerized. During “Cracked Actor,” Bowie rose serpentine from a canvas director’s chair, perfect cheekbones partly concealed by shades as he crooned to a skull perched in his hand. I’d never seen anyone so earthshakingly charismatic onstage, before or since.

Over the years I saw Bowie play four more times; in Portland, Oregon headlining a show on the Glass Spider tour in 1987; on the 1990 Sound and Vision tour, also at the Tacoma Dome; leading his underrated hard-rock ensemble Tin Machine at the Moore Theatre in 1991; and finally, at the Paramount in 2003 on the Reality tour, looking and sounding better than a guy in his mid-fifties had a legal right to.

Those shows cemented David Bowie’s music as one of the key components in the soundtrack of my life. His live presence represented the strangest paradox: comfort food in the form of some of rock’s most indelible melodies, delivered with subversive theatricality. Even during the glossy overkill of the Glass Spider concerts, when it seemed Bowie had briefly lost his way in the labyrinth of mainstream commercial acceptance, his charisma–and that indelibly theatrical voice–always won the day.

One of the constants through the scores of eloquent testimonials I’ve read on social media and the interwebs has been Bowie’s open embrace of his inherent weirdness—a courage about his appearance, sexuality, and music that liberated who knows how many people. Every kid who was ever derided for looking different, for being too fat or too skinny, for being gay or the wrong color, found a Patron Saint in David Bowie. It’s no coincidence that before he became a world-changing musical and aesthetic genius, Bowie started out as an awkward, skinny kid with weird eyes and strange teeth who was making shit up as he went along (not unlike a lot of us who listened to his music).

But oh, what shit he made up as he went along, especially on a live stage.