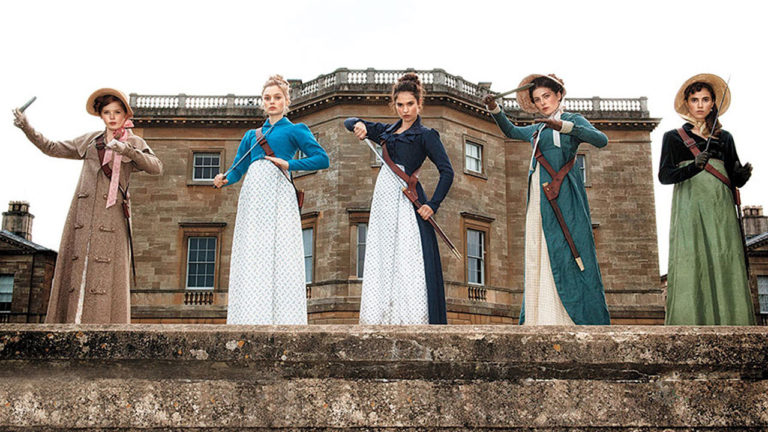 It’s the cinephiles’ equivalent of kicking a first-grader in the shins to expect Pride and Prejudice and Zombies to be some sort of masterpiece–or even a rom-zom-com home run on the order of Shaun of the Dead. But damned if it doesn’t work effectively just the same.

In case the surprise bestseller of the same name escaped your notice back in 2009, Pride and Prejudice and Zombies serves up the Jane Austen literary classic Pride and Prejudice, only with a zombie-plague plot threaded through the middle (Austen and modern US author Seth Grahame-Smith are co-credited on the contemporary mash-up). The Bennett sisters in Austin’s universe possess martial arts skills here, brandishing swords and knives against undead hordes, while London has become Ground Zero for a potential zombie apocalypse. The tumultuous romance between eldest Bennett daughter Elizabeth (played in the film by Lily James) and proud aristocrat William Darcy (Sam Riley) remains a focal point, but both characters cross swords as much as wits.

There’s only so much variation that can be mined from this combination of elements. Austen’s original narrative is (understandably) condensed  for length purposes. And when it comes down to brass tacks, nearly all of Pride and Prejudice and Zombies consists of Austen passages, bum-rushed (literally) by spasms of zombie attacks and extra-blood-spurty action scenes. As a result, the movie sometimes teeters on the precipice of numbing redundancy.

Happily, it never quite topples off of that edge. Significant credit has to go to the sturdiness of Austen’s foundation: It says a lot about her gifts as a literary craftsperson that her characters’ motivations and interactions, and much of her pointed class commentary, stand firm despite a thorough soaking in blood and viscera. Some genuinely clever new touches surface throughout, too. It’s a fun conceit that fighting methods betray class divisions as surely as any ettiquette faux pas, with the lower classes learning their skills through Chinese shaolin studies while aristocrats utilize Japanese samurai training.

Director Burr Steers keeps things moving at a nicely rapid clip, and his cast largely plays things straight, which adds some substance to the chuckles. No one in this ensemble is likely to obliterate memories of the 1996 BBC mini-series that elevated Colin Firth to the status of international smart-girl crush, but the new guard all acquit themselves favorably. James’ Lizzie Bennett strikes all of the right spunky notes, character actor Charles Dance plays her father with a knowing twinkle in his eye, and Riley’s Darcy broods and fights charismatically (it’s probably not an accident that Riley, with his prominent brow, troubled-baby face, and leather coat, bears a strong resemblance to martyred Joy Division lead singer Ian Curtis).

Pride and Prejudice and Zombies delivers everything its unexpected crossover audience could ask for. It packs a surprising amount of arterial blood spray, exploding cranial matter, and brain-munching into its PG-13 rating, without selling Jane Austen’s original characters and wry humor short. When it comes to pure bloody-frothy fun, you could do a lot worse.