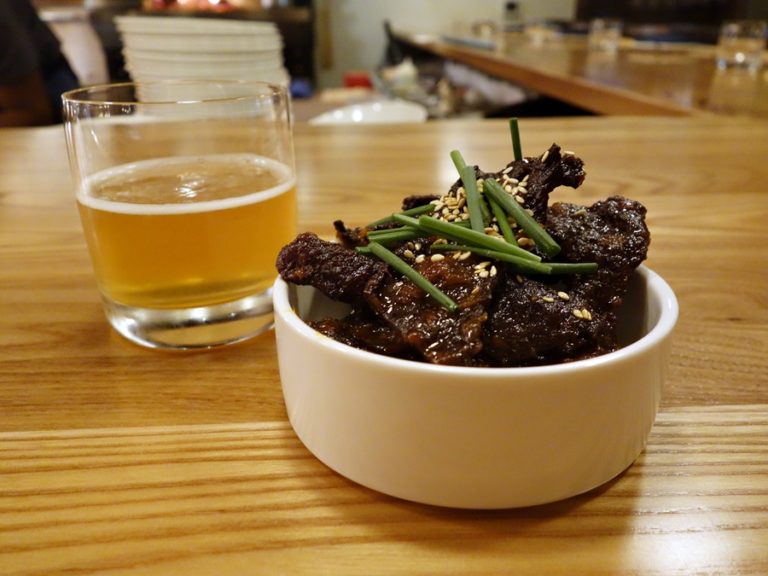 I rarely get giddy about a restaurant. It’s happened, in all places, in Cleveland in recent years. As for Seattle, restaurants like Joule and Hitchcock come to mind.

The giddiness I felt at the new Heartwood Provisions, mind you, was not from the alcohol. Let’s get that out of the way. I drink little, though in hosting my meal, the restaurant did pair each course with a cocktail. That’s their thing, and it’s far from a gimmick. These drinks (many of them vermouth-ed concoctions) made sense with the accompanying food. They’re not very large, so you won’t likely get drunk even if you have a big meal, though they will increase your tab a bit. (Though less than wine pairings would.) The drinks certainly add a new dimension to the meal.

That said, the food stands fine on its own. I’d gladly return to the restaurant for more of it, even without the accompanying drinks. Chef Varin Keokitvan demonstrates astonishing accomplishment, combining ingredients to bring out incredible contrasts (and complements) in flavor and texture. There’s a lot going on with some plates, but unlike other restaurants that tweeze numerous components, rarely are Keokitvan’s ingredients extraneous. The platings are playful and purposeful.

And it’s fun to watch the action happen while seated right at the chef’s counter in the open kitchen. The setting is a far cry from the former McCormick & Schmick’s days.

Service is thoughtful and knowledgeable (even just a week after the restaurant’s official opening), much welcomed in a place where you’ll want to make wise menu decisions. I especially appreciated that the staff wanted feedback, with no sense of egos getting in the way.

With all of Seattle’s restaurant openings, this one is flying under the radar. I’ll be interested in local critic response to see if the sentiment matches mine.

Here’s a look at my first meal at Heartwood Provisions, which hopefully will become a destination restaurant for downtown regulars, as well as others seeking a special occasion.