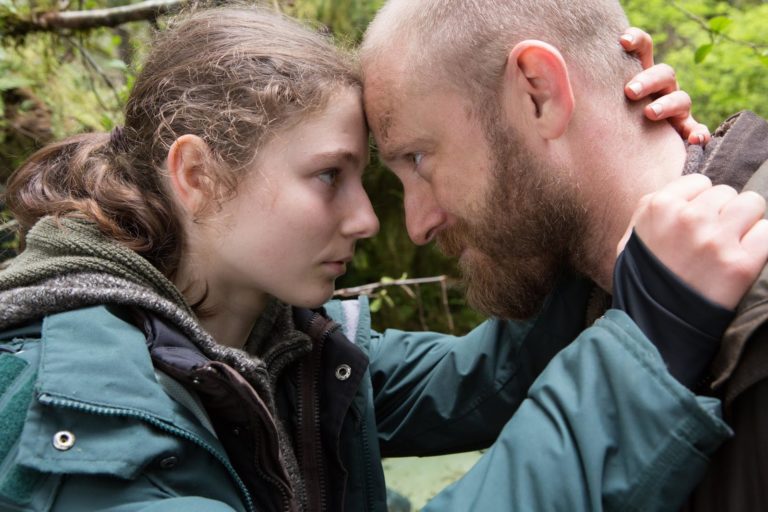 SIFF has wrapped, but the festival films live on in memory — and one hopes, in wider distribution. Continuing Chris’s earlier series of reviews, I’ve recapped some of my festival with short reviews. Somewhat inadvertently, this batch highlights the impressive degree to which SIFF’s programming centered stories on the experiences of young women, largely told by female directors.

In her follow up to Winter’s Bone, Debra Granik again focuses her lens on families struggling to survive in the face of poverty. This time, it’s an ex-military father with PTSD (Ben Foster) and his daughter (outstanding newcomer, Thomasin Harcourt McKenzie) who have illegally set up camp in a wild and wooded public park the outskirts of Portland like a realer, poorer, less insufferable version of Captain Fantastic. I expected something that would be hard, but rewarding, to watch. I was right, but not in the ways that I suspected. A story like this could’ve been filled with melodramatic external obstacles — creepy people in the park, cruel indifference of social workers, or any sorts of dire jeopardy. Instead, the wise and insightful script is one in which almost all of the conflict that they face is internal. The daughter is generally well cared for, incredibly smart, and as well-adjusted as you could ever expect from someone raised in the woods and always on the move. The people they encounter along the way are almost universally kind and generous within reason. All of this serves to emphasize the harsh reality of the utter insolvability of her father’s unspecified PTSD that has kept them essentially hidden from society for much of her life. The resolution is both heartbreaking and a tiny bit hopeful. (☆☆☆☆½)

I confess that I didn’t expect something so sensitive and insightful from a twenty-something musical comedian, but in his first feature Bo Burnham captures a kind of early teen loneliness with such extreme specificity that it was often difficult to watch. Elsie Fisher’s Kayla is a nice girl living with a nice single dad who seems to be doing a decent job raising her. She makes her way through her final week of middle school, posting ill-advised life coaching videos on YouTube, praying (unsuccessfully) not to be voted Most Quiet, navigating a charity invitation to a popular kid’s pool party, and having her eyes opened to a new social scene via a mentored visit to a high school. With her face illuminated by glow of a closely-held screen, the film captures the ever-present role of social media and the ways that it both collapses and magnifies the cavernous spaces between us, both IRL and at home alone, scrolling through never-ending content, liking and waiting to be liked. Although the movie made me squirm throughout and breathe a sigh of relief that my childhood was Instagram-free, none of these extremely cringe-worthy moments are played for laughs. The cumulative effect of this loving portrait of the intense regret of a disappointing three years of middle school made all the shared discomfort feel ultimately worthwhile. (☆☆☆☆)

Once the credits rolled, I had to immediately Google to find out more about this poppy collage of iPhone-quality videos, manic hypercolored interstitials, and documentary-like footage of eight girls and one giant dog goofing around, working out their feelings, and doing rad arts and crafts over the course of a summer in a Danish youth club. Among their activities, there’s a Sex Ed session conducted by local collegiate ‘sexualists’ that includes a befuddled guy in an inflatable penis costume who tries to provide candid answers to their questions, but is utterly unprepared by criticisms of the narrowly heteronormative nature of their presentation. Elsewhere, the girls spend their days having frank discussions of just about everything, from anorexia treatments and body issues, to depression, and the challenges being engaged to someone seven years older who drives the most absurdly embarrassing car possible. As the summer culminates in a very punk rock art show to commemorate the closing of the center, an emotional teddy bear burning ceremony, and an emotional unsanctioned slumber party, a final scene, I think, gives additional context to the summer. I’m not entirely sure what it all meant, but with the cast playing lightly fictionalized versions of themselves, the unorthodox film has the immediacy of a closely-observed documentary that provides an exceptionally realized window into an formative time in these girls’ lives on their own terms. (☆☆☆☆)

Crystal Moselle returns to Manhattan’s Lower East Side, but in place of the stranger-than-fiction story of cloistered brothers that she told in The Wolfpack, she overlays a fictional narrative over a real crew of skateboarding girls.  Although a painful accident forces isolated young Long Islander Camille (real life skater Rachelle Vinberg) to accede to maternal pressure to set aside her beloved wheels, the siren song of an open Instagram invitation to an skate session leads her into a secret life in New York. Moselle exceptionally captures the pulsing life of a the big city through the eyes of a lonely girl nervously following Google Maps directions to a near-instantaneous friendship of a pack of diverse fellow skateboarding girls that opens up her world; and quickly shows us the importance of this community through the sadness of a long commuter train home at the end of the night. As the movie progresses, the supportive world of these women is partially upset by a boy (Jaden Smith, among the few non-professional actors in the ensemble). But more than romance, it’s the draw of pushing herself harder that ultimately pulls Camille to endure the grosser rhythms, coded masculinity, and more technically daring skating of Boyland. Fantastic performances from mostly non-professional actors provide a sense dynamic realism and immediacy to quotidian drama of a vibrant group of diverse women making space for themselves in an arena too frequently dominated by testosterone-charged boys. (☆☆☆½)

Who’d have guessed that sending a bunch of teens into the woods to pray away the gay wouldn’t go entirely according to His plan? Desiree Akhavan’s 1993-set drama finds Chloë Grace Moretz (in the title role) sent off to gay conversion camp in upstate New York after being caught in a compromising position with another girl on prom night. Stuck in a woodsy lodge in a program led by a guitar-playing ex-gay and his sister who “saved” him from the scourge of same-sex-attraction, she chafes against the mix of new age therapy and faith-based indoctrination. Although the setting is scenic and there’s plenty of time to take long walks in the woods, there’s no such thing as a “good” dehumanizing detention program. At least there’s some comfort in her sojourns with other “disciples” who are there involuntarily, including Sasha Lane (American Honey) and Forrest Goodluck (The Revenant), a sanity-check of a support system amid the deeper tragedy of the other conflicted kids who have been convinced that there’s a cure for being themselves. (☆☆☆½)

A romantic escape to a gorgeous modern desert bachelor pad (located a helicopter ride away from civilization) goes incredibly wrong when one woman’s slick paramour’s buddies show up for a weekend of big game hunting. The men turn out to be predictably horrible, removing even the slightest possibility of sympathy when their moments of gory justice eventually arrive. I guess it’s fun to see a woman exacting bloody retribution on awful men who deserve it, but it’s still so much brutality, gore, and violence. Plenty of style points, though, make it a as wildly enjoyable ride as one could expect from so much explicit bloodshed. (☆☆☆½)