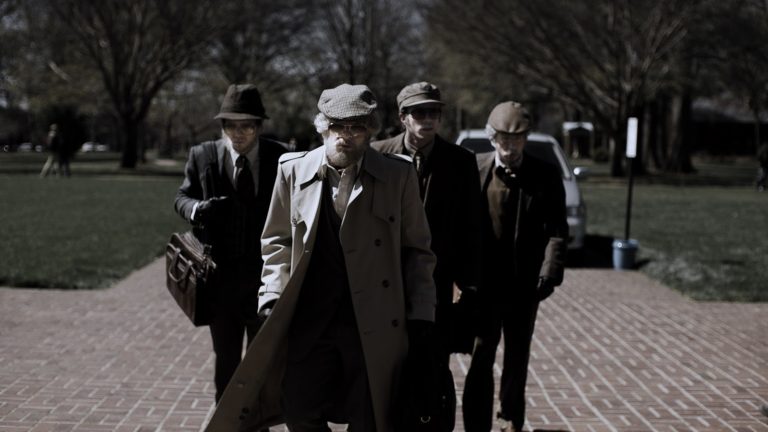 Continuing a series of reviews from SIFF 2018, a collection of documentaries, stories of real people, or something in between.

This snappy fusion of documentary and true crime tells a story borne from the young male fondness for making gangs and schemes, the overwhelming desire to find out “what happens in real life”, and the all-consuming fear of being ordinary. It’s easily one of my favorites of the festival.  Layton mixes interviews with the real criminals, all grown up and filled with regret, with a narrative anchored by Evan Peters and Barry Keoghan that energetically recounts their plot to get rich by stealing rare and valuable books from the college library’s special collections. Clever visual illustrate the collisions of conflicting stories with faulty memories. But despite the overall lightness of the storytelling, with its funny disguises and adoring homages to other heist movies, the film never lets them off the hook for their stupidity, violence, or criminal behavior. As the guys get closer to the crime itself, the zippy fun of scheming turns to looming horror as the gravity of all their plans and promises becomes inescapable, drawing them into a crime that none of them individually wanted to commit. Such nice boys, though. (☆☆☆☆½)

The Mr. Rogers documentary we didn’t know we needed, from the guy who warmed your hearts with Twenty Feet From Stardom. Like most people who are currently alive, I spent many happy formative hours of my childhood in the company of Fred Rogers’s television show, reveling in the trolley’s visits to the Kingdom of Make Believe, oblivious to how socially groundbreaking his forays into the real world were, both on and off the air. Although it digs a bit into motivations (with some cartoons that didn’t entirely work for me), the film’s success is largely a loving portrait of Rogers from the people who knew and loved him most. And that’s more than OK. The footage of the show across the years and his effect on those who were privileged to know him left few dry eyes in the house. In this day and age it’s all the more remarkable that there’s essentially no dark side to a documentary about “an ordained minister with an abiding interest in children”. In other words, BE BEST. (☆☆☆½)

A cameo-filled love story about an alcoholic, his sponsor, sobriety, and the late 20th century’s embrace of poorly-drawn cartoons. Gus Van Sant’s adaptation of cartoonist Bill Callahan’s autobiography dodges what could’ve been a formulaic journey from alcoholism to sobriety by fracturing the narrative and intercutting between drunken hijinks, a quadriplegia-inducing car accident, the depths of despair, and working through the twelve steps of Alcoholics Anonymous into a celebrated career.  Along the way, examples of Callahan’s work fill the screen as a way of instantly communicating his dark humor while providing some much-needed laughter. Joaquin Phoenix, who’s otherwise predictably good at capturing everything from the manic to the morose, stretches the limits of hair and makeup to portray a person from his early twenties to late fifties. If I have a major quibble, it’s that it wasn’t apparent to me until very latein the film that Rooney Mara’s character, a flight attendant and volunteer physical therapist (really!), was an actual person and not a hallucination conjured in the depths of Callahan’s despair. While other supporting characters — including musicians Carrie Brownstein as a tough case worker and Kim Gordon and Beth Ditto as salty members of his support group — have little moments to establish a sense of believable identities,  Mara is caught in a textbook manic pixie dream girl role. I don’t blame her at all; it just seemed like that relationship wasn’t of much interest to Van Sant. In contrast, Phoenix’s scenes with Jonah Hill (who disappears under long hair and a beard in his role as the chill, rich, gay, AA guru) progresses from initial infatuation at his first AA meeting, to the courtship of sponsorship, through those twelve steps, had plenty of chemistry and felt much more like the film’s truest romance. (☆☆☆½)

I’m always up for a “truth is stranger than fiction” documentary and this story of identical triplets separated at birth who reconnect nineteen years later sounds certainly fit the bill. An incredibly weird first day of college sets off super twisty and totally true separated-at-birth of triplets who only discover each other at age nineteen fleetly covers their jump into “international celebrity” before ever-so-gradually introducing the “extraordinary and disturbing secret” underlying their whole story. The film isn’t perfect — it relies on withholding several key information for a bit too long to keep the intrigue alive — but it ultimately asks some big questions about “nature vs. nurture” and comes up with some surprising answers. (☆☆☆½)

Relive SIFF via all of our coverage on our SIFF 2018 page including interviews, pro-tips, roundtables, and reviews from the country’s biggest, longest, most-attended little film festival.