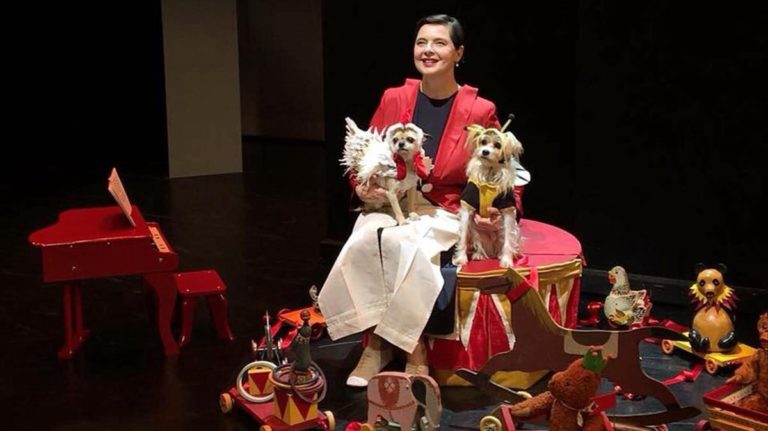 What is there to say about Isabella Rossellini? She’s a legendary film and TV star, with notable star turns in Blue Velvet, Fearless, and Death Becomes Her, and was nominated for a Golden Globe for Crime of the Century; oh yeah, and she’s been a model and fashion icon in her forties, and the daughter of screen legend Ingrid Bergman and Italian filmmaker Roberto Rossellini. It’s not an exaggeration to say she has lived one of the most interesting — and most enviable— lives ever.

Rather than list her IMDB credits, I’ll just encourage everyone to listen to this and meet back here in 35 minutes.

For some reason that is still unclear to me, I had the great fortune of speaking to Ms. Rossellini by phone a couple of weeks ago about this show. This is an edited version of our conversation, as unedited it sounded like an episode of “The Chris Farley Show.”

I was wondering if we could talk about “Link Link Circus” and where that came to be, and how the shows are going.

Yes. The show opened last May in New York at the Baryshnikov Arts Center, and then we went to Europe and we did several cities in Spain, like the big ones were Barcelona, Victoria. We did a few cities in France. We were in Athens, in London, in Belfast. So we toured quite a bit in Europe.

And, now I’m in a break for Christmas, and then we’ll resume in January doing the west coast of America. So we’ll start in Chicago, which is in the middle, and then we will do Seattle, San Francisco, Los Angeles, and San Diego. And then again in February, I go back to Europe and do more cities in Spain, and more cities in Italy. So we will have toured about 25 cities by the end of this tour in March.

And because I was a little bit afraid that cognition isn’t as fun as sex — I made it a little bit like a circus. So, I have a little dog with me, Peter Pan. And she is going to dressed up as different animals. And I’m dressed like a ring leader, and I have all of my toys as if I was child. And I just made it a little bit more like this little circus, because I was afraid that “cognition” doesn’t make you laugh. I mean, I want my audience to laugh, and to be basically entertaining. And then people go, “no, I didn’t know that about that science.” Everything I say is scientifically correct. So that’s why I have a dog, to charm the audience.

She’s sitting next to me, charming me right now, and practicing her skills.

Your dog’s with you, next to you right now?

I saw her in a video that you did that’s on Youtube, and that’s the cutest dog ever.

Yeah, she’s very cute. She was rescued a year ago from North Carolina. And I have a dog, and when I tried to train. . . I know how to train dogs because I volunteer for the guide dog foundation. I always have dogs. But when I tried to do it with my own dog, as soon as the audience said, “Oh, what a nice little doggie,” my dog just left and went to the audience and said hello to everybody. I just didn’t know how to train a dog indifferent to the audience.

And so I contacted a dog trainer on Broadway called Bill Berloni, and Bill Berloni does this all over America, all the dogs that you would see — all the Toto Wizard of Oz dogs — are trained by him. He only works with rescue dog. And so he identified Peter Pan for me, and then trained her for six months. And now she’s working with me, and coming with me everywhere.

She likes to perform. You know, you have to pick a dog that really (likes to perform), there’s nothing you can do with these dogs if they don’t like to perform, if he’s afraid of the audience, or he’s intimidated by lights and microphone — there’s nothing you could do. You have to find a dog that finds it playful, to perform, and she does. You know, the moment we arrive at any theater, she knows that, that’s the theater. She’ll start jumping around with great enthusiasm. She knows that treats are coming.

But also, I think she’s a little shy and, so to then have to work on commands and answers, she gets very excited, because then she gets rewarded, she gets complimented, and she likes that.

Well it was always an interest of mine since I was a little girl. And then in the last five years I went back and took a master’s degree on animal behavior and conservation. Something that I would have liked to have done when I was younger. But you know, it’s such a new subject. It’s a subject that really started in the 30’s with a man called Konrad Lorenz. He even won the Nobel Prize for having been the founder of this animal study. But then he was German and there was the war, so that was a very huge stop to his study.

And then they were resumed later on with people like Jane Goodall, who decided to observe animal in wild, not doing experiments in labs and always assuming that the animal had the same response. . .Are they able to resolve a maze as we would do it? But she started to study and live with animals in the wild to understand.

So that another great inspiration to these animal studies. But when I was little, at least in Italy where I grew up, there was Zoology, there was Biology, but not specifically Animal Behavior. And so I just remained interested in animals and behavior, and it was just my hobby until five years ago.

I went to a lecture about animal behavior, it was the great Temple Grandin, you know you is a very famous lady in this world, because she is autistic. She claims to understand animals much better because of her autism. Claire Danes made a film about her, for HBO. And she designs all the slaughter houses. . .50% of the slaughter houses in America are designed by her, because she knows how to keep animals calm in a moment of great stress, like at the slaughter house. She’s a very interesting lady.

And I went to hear a lecture at Hunter College, and they were handing out leaflets that said, “We just opened a new master’s degree program — Animal Behavior and Conservation” at Hunter College, which is in New York City, where I live.

So I signed up that evening, and I was one of the first students who signed up for this program at Hunter College. But also, it took me five years to complete it. An average student might take two or three years, I’m the slowest one on earth, because, of course, I also had to work at the same time. It took me five years to finish my master’s, but I have.

Well you know, to my family it makes sense to them because they always knew about my playfulness and my love for animals. And my family came to accept that I was just an icon of beauty and worked as a model. But at the beginning everybody was saying, “What! They think you are beautiful? You think you are elegant?” I’m always in the garden, running after rabbits.

So to my family it makes much more sense now than when [I] was just known as an icon of beauty. Of course back home, you know, Lancome and modeling. . . but, I liked that job too, I like that job or acting very much. It was available to me, and I started it with education and was saying would I like it? And I ended up liking it a lot. And I think that now that I do my own films and direct, I bring all this knowledge and this love together.

Before I’m cut off and run out of time, I want to ask about the “Link Link Circus” name.

The title, the “Link Link” comes from fact that Charles Darwin understood the mechanism of evolution, and said we are linked with animals; we‘re ancestors with the apes. And that offended a lot of people, and still sometimes there is resistance to that notion. But we are linked. And so the title of the show comes from that.

But what I really want for the audience is to be entertained. I see myself, basically, as an entertainer, so I want people to come and laugh and enjoy, and be charmed by the dog. And then go, “Oh, that’s right, I didn’t know that. How interesting.” So I want this double reaction where someone might say, “ha ha ha … oh.”

{Isabella Rossellini’s “Link Link Circus” will be at the Triple Door for two shows — 6:30pm and 9pm on Monday, January 14. Tickets and more information can be found here.}

This interview appeared on my personal blog in 2019 and is reposted here.}