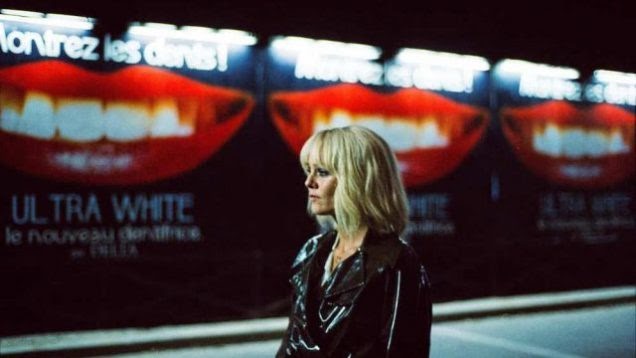 Tony: You pegged it, Morgen. I’m a pretty big fan of Italian genre cinema, and especially the Giallo.  Genre Geek Cliffs Notes: The Giallo was born in Italy in the mid-’60s, but the sub-genre flourished in European theaters throughout the 1970s. Gialli are basically the Euro-horror prototype of the slasher film, characterized by super-colorful pop-art visuals, shadowy black-gloved killers, whodunnit-gone-bonkers plots, gruesome (though often beautifully-shot) murder scenes, and feverish sexuality that sometimes backslides into misogyny. They’re basically B-movies, but the best of them are stylish, visually intoxicating, disturbing, and genuinely suspenseful.

Josh: … this one really set the “bonkers” mood by opening with a standalone music video / “dance party” to let the audience know what we were in for: a preview montage of the many horrible, yet also hilariously profane ways to be murdered, complete with a zombie revenge coda that foreshadowed the rest of the “queer slasher flick” that we all came to see.

Morgen: I’ll give you my take on this unique (to me) and engrossing film. I love B movies. I love how they embrace the weird, laugh at themselves, and yet seem to take it seriously enough where you have to give them credit for putting their love and all into it. That was absolutely the case with Knife+Heart, taking seriously what most would scoff at, and there lies the true depth of my love for this film and genre.

Tony: One of Knife+Heart’s biggest positives is that director/co-writer Jann Gonzalez obviously knows and loves the sub-genre. And he’s done a great job of inferring the visual style and period details that characterize the Giallo, without totally descending to pastiche.

Josh: I’d also add that Gonzalez has the advantage of having a brother (and occasional bandmate) in M83 who composed and performed a dreamy original score to elevate this material, particularly complementing the interludes that capture Anne’s state of mind as she intuits and investigates the root cause of this murder spree.

Morgen: The love story between Anne and Lois adds a complexity to the story that really engrossed me. We’ve all had a love in our lives that we would do anything to keep, as she falls deeper into her alcoholic haze she can’t stand to lose that love … meanwhile she’s trying to keep her company from going under (gotta get those films made!) and calm the actors that haven’t been murdered (yet). I especially loved her assistant on set (who also played her in male porn versions of the real-life murder mystery… I’m telling you they embraced the crazy). He was silly, but knew when to reel it in just enough to keep it feeling almost real.

Tony: I enjoyed Anne’s character arc, too: She’s flawed and doesn’t always do nice things (the character’s manipulative, resentful, and aggravatingly needy sometimes), but it all feels genuine. I’m super-fond of Paradis, just as a presence. She’s pretty fearless, blessed with a wonderfully raspy voice, and I love that she wears her middle-age (and her gapped teeth) comfortably. If her character was in a mainstream Hollywood movie, she’d be played by an actor 10 years too young and so unmemorable that you couldn’t pick her out of a police lineup.

Tony: Knife + Heart is also a refreshing reminder that you kinda can reinvent the wheel sometimes. The Giallo sub-genre’s a surprisingly versatile template, and a massive influence on mainstream film. In addition to giving breach birth to that ugly stepchild known as the Slasher Film, the Giallo was a huge influence on ’90s thrillers: If you’ve seen Se7en, Silence of the Lambs, or any other movies of that ilk, you’ve basically seen a Giallo, only Hollywood-ized and given a veneer of big-budget respectability. And it’s great to see a young European filmmaker reigniting the sub-genre with ferocity, humor, and a willingness to readily get his hands dirty.

Tony: I also greatly respect Gonzalez’s inversion of expectation here. In almost all of the Gialli, women (big surprise) are usually the victims, and sometimes their deaths are, well, highly sexualized. Knife + Heart most definitely eroticizes the kills, and it’s interesting seeing men being borderline-objectified before they’re bumped off.

Josh: I guess what we’re all trying to say here is that Knife + Heart must be seen to be believed. Kudos to SIFF for bringing such a wild romp to our screens, and particularly for scheduling an encore screening outside of the usual midnight slot. While I can appreciate that the late-night screening benefitted from a certain up-all-night enthusiasm, I personally benefited from not falling asleep from film festival exhaustion while watching it at a more civilized hour. There aren’t any more festival screenings, but readers should keep an eye out for it to hit cinemas or screening services over the coming year.

PS: The film will screen at the Grand Illusion Cinema beginning June 21: More details at www.grandillusioncinema.org.