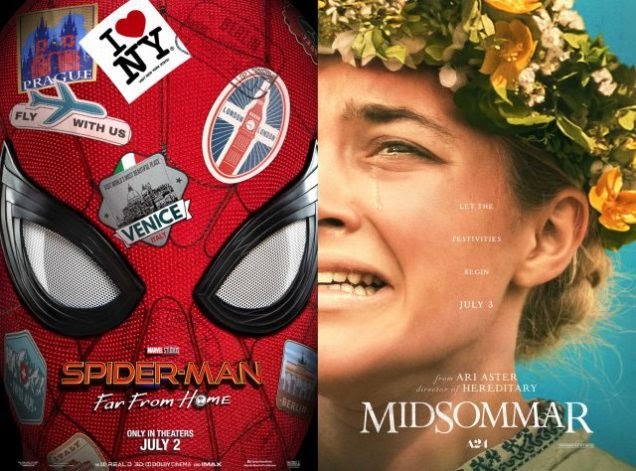 As we try to get into the habit of more regular, if belated, year-round film writing, two of last week’s biggest releases were about summer vacations gone horribly wrong.

Avengers: Endgame gave significant attention to the consequences of Thanos’s Snap. Half-emptied worlds, monuments, grief therapy, the weight of uncertainty and arbitrariness of surviving a coin flip. But (spoiler) by the time it’s reversed, there’s little time left in the already overstuffed three-hour running time amid the heroic bombast and weighty sacrifices to devote even a moment’s concern to what exactly happens when half of the galaxy Blips back into existence, unchanged by the passage of time.

Instead, explanations of those pesky little details and acknowledgement of the messy practical consequences are left to the next generation of heroes — the A/V club at Midtown High. And so this next, transitional, installation in the Marvel Cinematic Universe opens on the last day of school with a watermarked death montage for our fallen Avengers scored to Whitney Houston’s “I Will Always Love You” and teen news anchors explaining just how goddamn weird it was to Blip (that’s what we’re calling it now, get with the program) back into fourth period only to find that half of your classmates were suddenly taller and/or more impossibly swole. Later, Aunt May hosts a fundraiser for all the people kicked out of colonized homes who had to move on when the original owners Blipped back. It’s a bit jarring to chuckle at all the stuff that made us tear-up just a few months ago, but the world comes at you fast and there are bigger concerns like an epic summer vacation.

This little opening sets the stage and reminds us that we’re back in the shallow(er) end, stakeswise, which is the most fantastic innovation of this generation of Spider-Movies. In particular, our friendly-neighborhood Spider-Man is played again by Tom Holland, easily the very best of this century’s many Spider-Men (sorry Toby), in large part because he and the rest of the young cast can credibly pass as teenagers. Sure, he has some sads about the aftermath of his recent intergalactic shenanigans, but he has also been dedicating a substantial amount of his teen genius to perfecting a multi-step plan to make the most of his class trip to Europe and finally find out whether Zendaya’s Michelle (“MJ”) likes-him likes-him.

Since I first saw him in The Impossible, Tom Holland has always been super-effective at generating a sense of instant sympathetic anxiety and protective affection when placed in perilous situations. Here, he credibly portrays unresolved grief over his Avengers adventures and explores a bristling simmering chemistry with Zendaya’s MJ. Their teenage concerns, awkwardness, and anxieties are treated with the same degree of respect as the rampant chaos and destruction that follow them around the Continent.

He’s a kid whose powers are essentially being super strong and sticky with the benefit of a wealthy older mentor whose love language is supplying him with the finest tactical athleisure on the planet. But, despite his efforts to ditch the suit at home to focus on turning the Old World’s charms to his romantic advantage, Peter, of course gets caught up in do-gooding when monsters show up to ravage the picturesque canals and plazas of Venice (c’mon, guys, hasn’t this doomed sinking city suffered enough?).

Jake Gyllenhaal shows up in a cape and fishbowl helmet from another dimension to settle some scores against these awful monsters plaguing Peter’s EuroTrip. Those with a passing familiarity with the extended Spider-Verse may react differently to the weird sly energy, underlying sadness, and eager friendship that Gyllenhaal brings to this Mysterio character, but Peter’s more than happy to share some of that Great Responsibility with the older, wiser, hero once the danger has seemingly passed.

It would be a very subversive superhero flick if they just abandoned the world-shaking danger halfway through to go all-in on teen rom-com. The stacked young supporting cast — Jacob Batalon and Tony Revolori reprising roles as Peter’s bestie and rival, respectively, now joined by an on-point Angourie Rice round out the teen ensemble; Martin Starr and Jay Smoove as the hapless chaperones; and Jon Favreau and Marissa Tomei as the adults left mostly at home to fumble through their own crushes — could easily pull it off, but there are thousands of artists dependent producing spectacular effects and simulated destruction; so the show must go on. Peter still struggles with his priorities as his classmates are thrown into danger, but the film makes the admirably modern choice of not setting MJ up as a damsel in distress.

Like any great trip, the film plays out as a series of fun installations with a lot of laughs and heightened adventures. Cities tick by and with them come the requisite twists and explosions. But in truth, it’s perversely kind of fun to see so many beautiful places you’ve vacationed getting ravaged by cinematic monsters. Along the way, there’s some light commentary about our current wretched information environment and a sweet nod to Dutch politeness. By the end, per Marvel Protocol, we do get a few mind-bending battle sequences, but they also kind of serve as meta-commentaries on the trope of dramatic CGI battle sequences themselves. When it’s all said and done, there’s never enough Crazy Jake, particularly hidden under that misty fishbowl, but these kids are still more than alright. ✩✩✩✩

A way that I survive watching horror (or, in this case, horror-adjacent) movies is to identify the unforgivable mistake — one that I certainly would never commit — to allow me feel a sense of safety and superiority over the characters who deserve the awful fates that inevitably befall them. In Midsommar, this moment came early and validated my instinct that “escape immediately” is the only correct response when, fresh off of a transatlantic flight and a cramped four hour car ride into the remote north of Sweden, your horrible boyfriend’s grad student friends pressure you to join them on a psychedelic mushroom trip in a perpetually sunny meadow surrounded by cheery backpacker Swedes returning to their homeland. Rather than commandeering the car, ditching the bros, speeding back to Stockholm, and having a perfectly nice self-discovery city break, Dani (Florence Pugh of Lady Macbeth, The Little Drummer Girl), however, gulps her trippy tea, watches her feet turn to plants, and runs sobbing into the woods to sleep it off alone. Highly relatable, if nothing else.

The much-hyped gimmick of Ari Aster’s follow-up to Hereditary is that the nightmare takes place in broad daylight. This is only partially true. Backing up from that fateful meadow, the true horror happens in the grim dark of winter before the credits even even roll. We first meet Dani, justifiably anxious about an emerging family tragedy. Her boyfriend Christian (Jack Reynor, with a toxic blend of hapless passivity and ego) is planning to smoke resin and eat pizza with the grad school bros who constantly nag him to finally break-up with her. When her worst fears are validated, he comforts her through her feral cries of unspeakable agony, and their rocky relationship stays on life support. Months later, still grieving, a game of sympathy chicken ensues, she accepts a bad-faith invite to tag along with him and his AnthroBros on a trek to a classmate’s small-town summer festivities in the far North of Sweden. Nobody wins.

The film runs 150 minutes, which seems long, but how else was Ari Aster supposed to convey the absolute mounting dread of being stuck out in the country on an ill-advised vacation with a bad boyfriend, his friend’s weird family, and no internet service? Let alone in an isolated commune with celebrating a once-every-ninety-years midsommar festival with some very strange practices. Once again, the nine-day (kill me now) festivities open with an awkward lunch and an incredibly traumatic ritual. Instead of being cause for retreat, the two American students in search of a breakthrough thesis topic dig-in, determined to make the very most of the experience. They become our excuse for staying in this nightmare as well as a convenient conduit for explanations of the bizarre happenings.

There are some conventions of horror, but at its heart this is a break-up movie and much of the film is Florence Pugh Reacts to Weird Stuff. And on this front, at least, it succeeds mightily. Pugh is an expressive mirror, often in direct eye contact with the camera, and Aster’s production department have created a visual wonderland of floral crowns, austere costumes, and fantastic rural architecture in which every interior surface is decorated with subtly macabre folk art that prepares the audience for subsequent scares. The rituals are both bizarre and self-serious; the violence is deeply gross but also borderline hokey; and the Haxan Cloak’s soundtrack creates a constant sense of growing dread. All of this colludes with the ever-present psychedelia to convey a sense of a reality-adjacent fable spun to explore Aster’s primary concerns of family, ritual, and trauma. Oh, and much of it is darkly funnier than you’d expect, a necessary release to the truly bizarre developments. I’m not sure if the story itself is airtight, but the mood is pervasive and not easy to shake. Pugh’s reactions to all of it are superb: from initial horror, through trippy confused immersion, astonishment, and resignation, all the way through a magnificent climactic smile. ✩✩✩✩