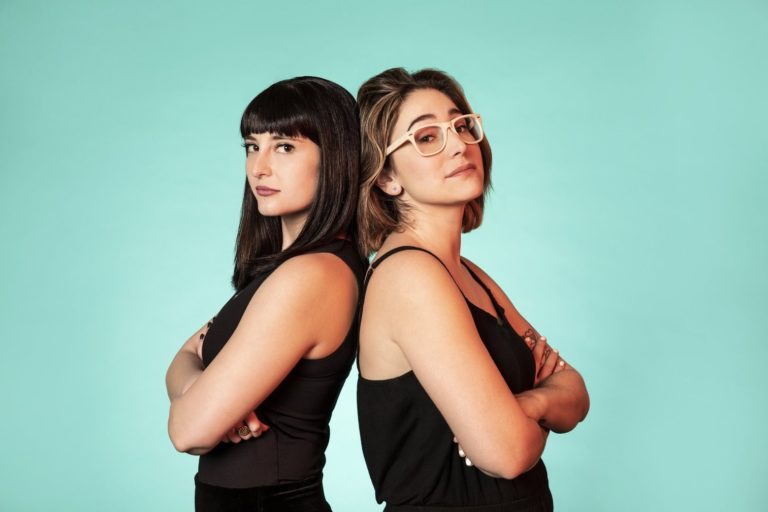 Comedians/writers/podcasters/YouTubers/lifelong friends Allison Raskin and Gaby Dunn have so much going on these days it’s almost difficult to believe I got them on the phone for a few minutes to chat with me about their fun, new, quasi-autobiographical novel Please Send Help, which just came out last week.

Please Send Help is Dunn and Raskin’s sequel to their New York Times-best selling first novel I Hate Everyone But You. They also host a popular YouTube channel, and have a fun and funny podcast (both called “Just Between Us”, but what I love most about them is their willingness to tackle difficult subjects (like personal finance and mental health) in an accessible and supportive way. If you were looking someone as the “voice of the millennial generation,” or whatever, you could do far, far worse.

This is all leading up to mentioning that Allison Raskin and Gaby Dunn are in the middle of a tour that wraps up this Wednesday with a taping of their podcast at the Triple Door. I spoke with Dunn and Raskin last week by phone, shortly before an event at Harvard.

I’ve been listening to the audiobook version of your latest novel, and I want to ask why you guys decided to revisit the same characters in this book as in your first?

Allison: I guess we didn’t really feel like the story was done, to me, where we are tracking their friendships through the different stages of their life. Cause you know, friendships grow and change, and there is different strains that is put on them and so we kind of wanted to tackle the next big step which is that first year out of college. It’s a milestone, and I think, for a lot of people right now that are very confused about what they are going to do in the real world. So we were like, that’s perfect for a sequel.

Your publisher sent me a PDF of your book, but I ended up buying the audiobook the day it came out so I could hear your characters in your voices, and I found I enjoyed that because of the chemistry you both have. What was it like recording your own words, versus riffing off of each other on your podcast?

Gaby: It takes a lot of time. It’s like four days in a studio. And also, it’s a little bit after we have turned it in already, so we were having a great time, cause we were reminding ourselves what we wrote and then laughing at our own jokes.

We thought, it’s always better… I don’t know. I just find that it is better to read it ourselves. I love when we are reading it ourselves because you just get to hear the interplay of the characters. We say the characters are based on us, it is very loosely based on us, but obviously it’s not a memoir in any sense. But it’s cool to get to play like the Gen character, and Allison gets to be Ava, and that’s what our fans would expect and like.

I also found it very “of the moment” with some of the plot details, like with getting stuck in a crappy writing job in the middle of Florida, and not being able to report on the illegal rave the school is running, and such. It seems like it’s not too far removed from the struggles a lot of people are going through right now.

Allison: I think it’s like loosely based on stuff we experienced in our early twenties. You know, I never worked at like, a late night talk show, but I was an assistant, I was an intern, I was like very close to the action, but not actually getting to do any of it which is something Ava kind of struggles with.

And then, luckily Gaby never had to live in the middle of Florida. I mean she lived in Florida, but she didn’t have to—

Gaby: I grew up in Florida, but not there!

But yeah, we set it in New York and Florida because Allison is from New York. I wanted to delve in to how weird Florida is, because I have experience there. But then also I was a journalism student and I really, really was self-righteous about it, and I really cared, and I was just like Gen where I was like, the story is the most important thing and I have to find a story and I was do or die about it. And I think that is something like, that ambition even to your own detriment is something relatable to a lot of young people even though I was going through this 9 or 10, so ten years ago. Or whatever. But-

Allison: Wow, we are so old.

Gaby: I know, we are so old. I just felt like it was a really relatable thing to be like I need to make a name for myself, I don’t know where what how I’m going to do it or what. I really felt that way, so that is pretty ripped from the headlines for me in terms of what I was like right after college.

Another thing I liked about the book is that it’s an epistolary novel, which you don’t see all that often these days. It’s really effective to have this story told through the e-mails these two characters send to each other.

Gaby: We wanted it to really feel like you were inside these girl’s friendships, and we felt like then actually only speaking to each other instead of traditional prose would let you be able to feel more a part of it than if it was traditional prose.

Allison: Yeah, it’s just the nosiness of reading someone’s emails and so like intimacy of going through someone’s phone and seeing their texts. You are seeing what they would say only to their friend and stuff that they wouldn’t say otherwise because they get to be unreliable narrators. It’s like Ava tends to make things sound worse than they were, and Gen tends to make things sound better than they were.

I want to ask about your live shows now, which I believe start this weekend, and have one in Seattle on Wednesday…

Gaby: We are doing the live taping in Seattle with Vicki Robin who is one of the founders of the initial personal finance movement. She does a lot with early retirement and she talks a lot about community. I have a money podcast, and she was a guest on that and she was so fantastic. I just think she’ll be like a really good role model person for the fans to see and get to talk to. She is very open about a subject that people tell you not to talk about.

I wanted to bring up money too because I was going to talk to you, Gaby, in January or February when you were going to come up to Seattle with your book Bad With Money, and then it got snowed out so we never got to talk. But it’s such an interesting topic and there is great moment on episode one of your podcast where you ask people, “What is your favorite sex position?” and they have no qualms about answering that, but people really clam up when you ask how much money is in their checking account.

Gaby: Yeah. That’s the best. That’s one of my favorite things that we have ever done. Yeah, so our guest for Seattle is your own home-grown local amazing finance writer Vicki Robin, whose like, her book was on Oprah, and it’s been in the New York Times best-seller multiple times, and she’s awesome.

You have different guests throughout your tour, so will this show on Wednesday be focused on personal finance?

Gaby: Our interview with her probably will be, but the rest of the show is kind of the same as the podcast, where it’s like just sort of free-for-all. Normally when we record, we record like hours and then we edit it down. But now you will get to hear everything we say. So it’s going to be totally uncensored.

I would say it is a mix of comedy, and then also advice, and strange topics and game shows. It’s a variety show, so there is something for everyone, hopefully.

What’s it like for you to write your novel together?

Allison: For most of the book we were in the same room, and you know, one person, I was typing the book and Gaby was there with me figuring out what the hell was going on and where these characters were going to go nuts. We don’t divide by character or anything. I typed the book and we just figured out the plot lines together.

I think I read that you guys rented an office and just kind of holed up together for the first book. Was that kind of similar for this one?

Allison: Yeah, we had an office for some of it. And then, for some of it Gaby was writing a different book. So I was just like in a hotel unpacking it, trying to get the thing done, as my apartment was being renovated.

Gaby: Yeah, the first book we worked on it at Allison’s house, but this time around Allison’s house was getting renovated. It was very poor timing. And so we were like ummm fuck.

Allison: Yeah, it was not a smooth sailing experience, but we are happy with the end product and that is what matters.

Do you have anything upcoming that you want to talk about, before I let you go?

Gaby: I have a graphic novel that is coming out in October from Boom Studios called Bury the Lede. So I’m very excited by that.