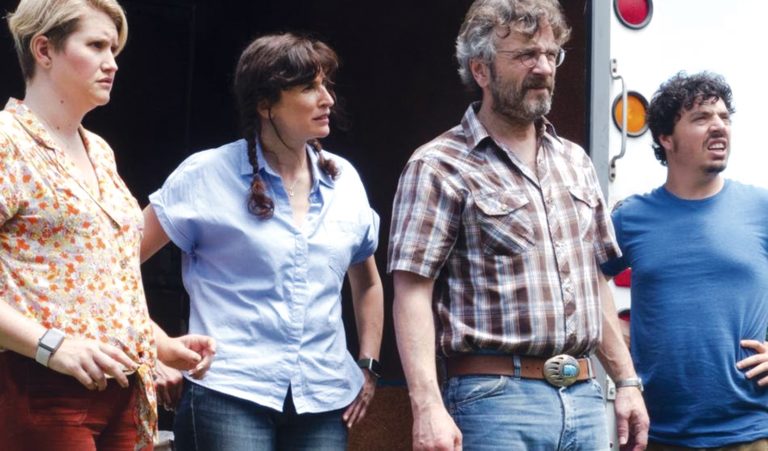 In Lynn Shelton’s Sword of Trust, two women (Jillian Bell and Michaela Watkins) arrive at a recently-deceased grandfather’s house in Alabama, expecting to inherit the place. Starting a life together, the bittersweet death of a kindly relative also brings fantasties of how the small windfall might help the couple to jumpstart their own dreams.  Instead, they’re surprised to learn that, via one of those reverse mortgages always being hawked on television, the bank already owns the house and most everything in it. The only thing bequeathed to them is beloved antique sword, wrapped in velvet and accompanied by an outlandish conspiracy theory about the true outcome of the Civil War.

A world-weary local pawnshop owner (Marc Maron), well practiced in the art of the gentle-but-firm recalibration of high-value dreams from a slow parade of townsfolk unloading treasures from the attic or temporarily parting with possessions as a form of short-term loan (Shelton, in a brief role as Maron’s struggling ex), is similarly skeptical when the couple arrives with their unwelcome artifact. Unconvinced of its value and incredulous of the story behind it, he makes a low offer that they’re able to refuse. It’s only when his hapless iPad-addicted assistant (Jon Bass) stumbles across a community of alt-history enthusiasts on the internet who are willing to pay big bucks for these prized pieces of “evidence” of the South’s hidden victory that the plot snaps into gear. The pawnshop boys agree to play brokers for the visiting women, taking on the dangerous details of the rendezvous with the promise of a healthy commission.

Like several of her previous films, Shelton sets the stage with an outlandish story, plots out the overall structure, and then relies on her talented cast to humorously fill in the details and develop the characters. So, as this makeshift adventure unfolds with menacing phone calls and clandestine arrangements, the characters remain grounded in a sense of lived-in reality. And it is quite funny. Skewering the truly crazy things that people, often emboldened by the internet, fervently come to believe is ripe territory and the film has fun at their expense while treading lightly into the dangerous consequences of these delusions.

But ultimately, amid all the laughs, it’s a showcase for these actors. In that light, the whole convoluted enterprise justifies itself as an excuse to get these four people trapped in the back of a windowless moving truck en route to to meet the secretive buyer. Anxious and second-guessing their potentially dangerous scheme, they pass the ride with a conversation that reveals the surprising turns that people’s lives take and the choices they make to care for themselves and each other. Maron’s monologue, in particular, is an engrossing piece of acting. As he unspools his character’s history and the tough decisions he’s made, the rest of this zany world falls away for a few dazzling minutes. There is, of course, a zany and madcap resolution to the plot, but that’s hardly the point. ☆☆☆☆