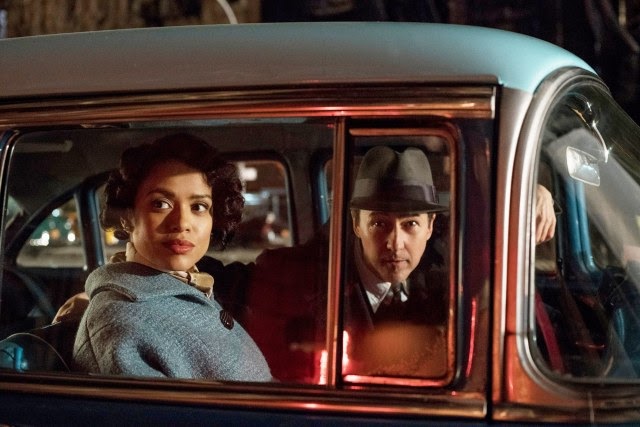 By the third day of Telluride, you’re well adjusted to the altitude but already feeling the effects of sleep deprivation. I made some of my choices based on buzz and others based on which (morning and evening) screenings were closest to our condo and which midday screenings offered the best potential for spending at least a couple hours in the uncommonly warm weather for a cocktail and dinner break. Plus, the festival isn’t complete without at least one gondola ride to check out a movie at the Chuck Jones cinema in the Mountain Village ski resort.

MOTHERLESS BROOKLYN  Edward Norton brings the Jonathan Lethem novel to the screen, directing himself as the titular Tourettic detective. Fans of the book may be surprised to find the much-admired novel transported wholesale from the 1990s to the 1950s with postmodern elements largely discarded in favor of a by-the-books Noir. The one constant is title character Lionel Essrog, who describes his condition as having “threads in his head”. This translates to inadvertent obscene vocal outbursts, obsessive behavior, and uncontrollable physical tics and twitches. It is nothing if not an incredibly committed take on the role, as Norton embodies the physical manifestations while keeping a running voiceover to convey an inner control that might otherwise not be evident. It’s hard to say whether these symptoms often playing for laughs was a symptom of an eager audience than a filmmaker’s intent.

The story kicks off as the owner of a ramshackle detective agency (Bruce Willis) gets himself into trouble during a mysterious meeting between local criminals. An investigation into his mentor’s downfall finds Norton’s detective tracing clues from the office of city planning to Harlem jazz clubs all the while mucking deeper and deeper into the secret history of New York.

Along this journey, there are noteworthy appearances from Gugu Mbatha-Raw and Michael K. Williams (doing a great jazz trumpeter impression to a new score from Wynton Marsalis) as well as Willem Dafoe as a paranoid architect with a dark secret. Looming over them all is Alec Baldwin — who’s had plenty of practice playing a power-mad developer — this time embodying real-life figure Robert Moses, as a self-obsessed blowhard, albeit one effectively operating levers of power and menacing anyone who stands in his way.  The whole thing comes across as stagey at times, but it’s nevertheless a fun story, particularly for fans of the period. And there’s a new Thom Yorke song thrown in as a nod to the novel’s postmodern origins. ☆☆☆

It has much of what you’d expect from a Terrence Malick film. A balletic camera dancing through idyllic scenes of a telegenic young couple’s (August Diehl and Valerie Pachner) romance, marriage, and life in a gorgeous farming community situated in a verdant valley high in the Austrian Alps. An adoration for natural light and the natural world. No one has ever filmed noble farm animals animals, breezy fields of grain, children playing, and hands caked with dirt from working the earth with more wide-eyed awe and respect. And, of course, a whole lot of whispery voiceovers (despite the setting, these, like much of the dialogue is in english). However, based on the letters of real-life Radegund couple Franz & Franziska Jägerstätter, it has something that few of his recent films don’t: a linear plot.

The film opens and is intercut with stock footage chronicling the dark rise of Hitler and Germany’s growing aggression. Like the villagers, a naive viewer might imagine that the the ugliness of the looming war could never upset the high altitude tranquility. But come for them it does. First in the form of military training, where Franz is appalled by the jingoistic footage and horrified by reports of the atrocities of war. Upon returning to the village, Franz vows never to swear an oath of loyalty to Hitler and agonizes over the consequences. When he is eventually called to serve, the film tracks his steadfast resistance through series of jail cells and trials while also following Franzika’s isolation at home, toiling to maintain the farm while being shunned by her neighbors. The three-hour running time has an immersive effect that conveys the frustrations and sacrifice of principle. And, though it is based on a historical figure, the message feels unfortunately relevant to the current era.

It is at times a difficult watch, but suffused with incredible beauty. As I was leaving the theater, collecting my thoughts and mapping out the rest of my day’s agenda, even walking alongside a drainage ditch in Town Park felt a bit like a spiritual experience after spending three hours with Terry Malick.  ☆☆☆☆

PAIN AND GLORY Antonio Banderas is wonderful as he takes a melancholy meander down Pedro Almodovar’s memory lane. With episodes that cut between the dawning of a creative life as a prodigious child in rural Spain and the chronic pain-addled midlife doldrums of a successful career on hold in an amazing apartment the city, it is an altogether lovely tapestry of reminiscences in an artist’s reawakening after a loss.  ☆☆☆☆

THE CLIMB You learn just about everything you need to know about the dynamics of Mike and Kyle’s (real life buddies Michael Angelo Covino and Kyle Marvin) lifelong friendship within minutes. To celebrate Kyle’s impending nuptials, Mike has somehow persuaded his pal to take a rigorous cycling tour. He waits until they’re hitting an incline to turn their celebratory conversation to a revelation about how he slept with his best friend’s fianceé so that he can ride ahead while his ill-equipped pal is still gasping for air.

Over a series of hilarious and cringeworthy vignettes divided by bizarre musical interludes, you follow their relationship through loving sabotage, terrible behavior, and diverging paths of success, physical decline, and emotional well being. With just a bit of disorientation and exceptional cutting, the film skips along through major interpersonal landmarks — funerals, holiday reunions, engagements, weddings, and divorces — that gradually reveal a sense of how they fit into each other’s lives and why they can’t just call it quits. Improbably, they ultimately demonstrate how even toxic betrayal-ridden lifelong friendships can warm the heart. ☆☆☆½