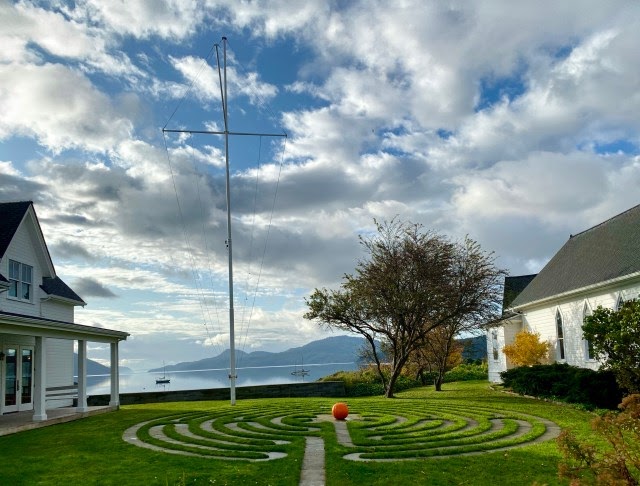 I spent the weekend on Orcas Island for the sixth-annual Orcas Island Film Festival. Amid following many of the programmer’s extracurricular suggestions and striking out on a few of our own — highly recommendable breakfasts at Brown Bear, Island Skillet, and Doe Bay Cafe; delicious craft cocktails at The Barnacle and The Loft; incredibly satisfying and creative dinners at Mijita’s, Hogstone, and Outlook Inn; and a morning Seahawks game with the town’s best view at the White Horse — we also managed to take in a few very good films and mingle at a fantastic party at the Oddfellow’s Hall with DJs Jean-Marc Valée and Darek Mazzone. Some brief notes below from an always-invigorating weekend of moviegoing.

Synonyms: Vocabulary lessons are the least confusing element of an Israeli soldier’s complicated attempt attempt to shed his identity to become truly French. Yoav (Tom Mercier, both frustrating and utterly captivating) shows up in Paris with only his backpack, lets himself into an breezy empty Marais apartment via a key under the rug, crashes for the evening, and wakes up in the middle of the night to find all of his possessions — including every scrap of clothing — stolen out from under him. A bath isn’t enough to warm him up, but luckily, some wealthy young neighbors (Quentin Dolmaire and Louise Chevillotte) observe the longstanding French custom that dictates that if you find a well-endowed neighbor in peak physical condition at death’s icy door, you must bring him back to your luxuriously-appointed apartment, warm him with furs, and give him everything he needs to start a new life in the city, including a striking mustard-colored car coat that makes him look like a fashion super hero in one fell swoop.

This life involves some non-specific security work, cutting off ties with his family in Israel, and trying to pass as a local by never taking in the postcard-perfect views while crossing the Seine. He splits his time between hanging out with a brash fellow expat and the couple who helped him out on his first frozen night in the city. They both come to be understandably infatuated with this stranger, his curious vocabulary, philosophical musings, and his stories. Under Nadav Lapid’s direction, we feel Yoav’s simmering ambition, anger, displacement, and yearning. The camera shifts from shaky to smooth, changing perspectives with agility, keeping the audience equally off balance it trails him through the city, citizenship courses, a tiny apartment, a phenomenal dance party, and dipping into memories as he tells tales over drinks. With such beautiful people, engrossing and immediate filmmaking, I’m willing to excuse the way that it maybe crumbles into a confusing muddle at the end. ☆☆☆☆

Jojo Rabbit: Casting himself as an goofy Imaginary Hitler to an ill-informed ten-year-old zealot in the last days of the Third Reich, Taika Waititi stages plenty of bits for himself and the very cute kids at the heart of the story, but it turns out that — for me, at least — maybe it will always be “too soon” for twee Nazis in Moonrise Kingdom costumes, even in service of a warm, fuzzy, message of anti-hate. Especially when Wes Anderson already covered the cruel absurdity of fascism with far more bite in The Grand Budapest Hotel.

With that said, Roman Griffin Davis in the title role of a boy who gets his nickname for being too soft to kill a bunny to prove his loyalty to the cause is never cloying in his wide-eyed, misplaced enthusiasm. And, as the Jewish girl stashed away in the walls who teaches him a thing or two about compassion and feeds him some ridiculous stories about her culture, Thomasin McKenzie (so great in last year’s Leave No Trace) treads a delicate but winning line, indulging and teasing her unwilling host. The rest of the supporting cast are similarly game: Scarlett Johansson as a single mother secretly on the right side of history, Sam Rockwell as a buffoonish captain gradually succumbing to the grotesque futility of the war, and Stephen Merchant as a menacing (yet funny, of course) S.S. officer. And maybe if it was all whimsy and lightly skewering humor, it would be fine. But the film seems not to have any idea what to do with itself when grim reality crashes into frame, calling its own reason for being into question. ☆☆☆

Les Misérables: Via a French cop’s (Damien Bonnard) first day on the job as part of an Anti-Crime Squad, Ladj Ly provides an intense crash course in the tenuous power structures and simmering tensions of Montfermeil, the Parisian banlieue that once served as the setting of the Victor Hugo novel. Riding along with his brash and racist partners following France’s World Cup victory, he navigates the overlapping worlds of kids from the projects, immigrant families, rival gangs, a reformed gangster turned spiritual advisor, and self-styled Mayor who tries to keep the peace among the exurban poor. It’s a humanist and largely non-judgmental survey until an arrest sets off a series of events where just about everything that can goes horribly wrong. And just when you, and the characters, start to catch a breath, the second day turns out impossibly worse. ☆☆☆

Atlantics: On the Senegalese coastline, workers toil away at building a sleek glass tower for months without pay. Fed up with the working conditions, a group of men slip away from a dance club in the middle of the night, bound for Europe by raft in search of better opportunities. Casting non-professional actors, director Mati Dopp uses star-crossed lovers Ada and Souleiman (Mama Sané and Ibrahima Traoré) as a lens for this globalization story: already thwarted by her engagement to another more prosperous man, their romance is further interrupted when he disappears into the sea that night.

We assume that he’s never to be heard from again, until her wedding night is prevented by a suspicious fire. As a detective arrives in the city to investigate, with Souleiman as the chief arson suspect, a mysterious fever spreads through the community, and the story takes on a series of increasingly striking supernatural twists (not for nothing is it subtitled “A Ghost Love Story”). The dreamily-filmed meditation, a winner of the Grand Prix at Cannes, speaks to the perils of migration, a hunger for justice, and the consequences to the community left behind. ☆☆☆½

Honey Boy : Alma Har’el works from an autobiographical screenplay from Shia LaBeouf, in which the actor literally works through his daddy issues by playing his own father. Noah Jupe plays baby Shia, shuttled by his rodeo clown father from a deadbeat motel occupied largely by friendly prostitutes to earning paychecks on film sets. In a parallel narrative, Lucas Hedges does an uncanny vocal impression of the actor all grown up, trudging through the mechanics of big budget action films, abusing substances, and doing a stint in rehab. The result is a deeply strange and surprisingly affecting piece of art therapy. ☆☆☆½

Frankie: In scenic Sintra, Portugal, an aging film actress (Isabelle Huppert) uses her impending mortality to convene a mixed family reunion. No one — from her husband, son, step-daughter, grand-daughter, or ex-husband — is particularly happy to be dragged to this quaint vacation estate, nor are they especially willing to put up a very happy face on her behalf. Members of the ensemble pair off in two-hander conversational vignettes that gradually reveal the family’s history. Greg Kinnear and Marisa Tomei stumble into town as a couple on a romantic getaway whose stories intersect with Huppert’s through a combination of shared history and scheming. The teen granddaughter skips off to a breathtaking beach in what feels like a diversion sponsored by a local tourist board while her parents contemplate the end of their marriage. Despite the enviable scenery and some truly gorgeously-executed shots that showcase the clifftop setting, the script feels like it was run through a translator and the actors often seem as if they got their lines mere hours before shooting.

Ira Sachs usually makes movies set in New York about people facing challenging economic realities, so you can’t blame him for taking a little diversion to somewhere remote, glamorous, and assembling a cast of celebrities to improvise a story about the problems of a family of very wealthy people. The endeavor isn’t a success by any means, but there are far worse ways to spend an hour and a half than in their company. Huppert’s hiking ensembles, wry deliveries, and a postcard-perfect closing shot makes it just worthwhile. ☆☆½