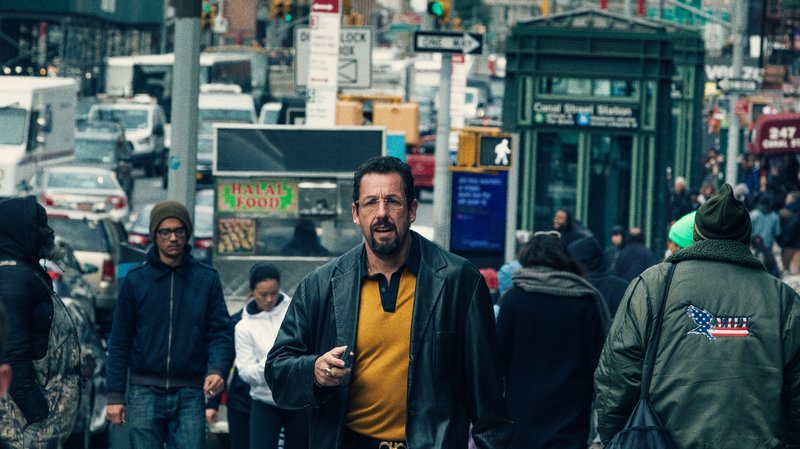 In the 2012 NBA playoffs, the second round saw the Boston Celtics defeat the Philadelphia 76ers in seven games. In game three, aging superstar Kevin Garnett had a pretty remarkable game with 27 points and 13 rebounds. Game four, he struggled, only scoring 9 points and had a field goal percentage of 25%. For anyone following the series, Garnett’s inconsistency should’ve been brushed off with players, even elite players, having good and bad nights, especially in the latter years of their career.

Garnett stars as himself and Adam Sandler is Howard Ratner, a jeweler and basketball fan, starstruck when Garnett comes into his store. Ratner is a fast-talking (when he’s not yelling) salesman who thinks he’s on the verge of his biggest score: a rock full of gems from Ethiopia that he believes to be worth over $1 million. He gets talked into letting Garnett carry the stone with him, and it helps the Celtics legend have a great game in the playoffs. When Garnett offers his 2008 championship ring as collateral, Ratner is already on his way to pawn it.

Ratner is also in the kind of trouble you could only see in pulp stories. He’s being followed by tough guys that are owed over $100,000, he and his wife (Idina Menzel) are divorcing, his kids don’t think he has any time for them, and his much younger mistress (and employee: Julia Fox) might be sleeping with the Weeknd. He’s imploding fast but holds on to the (blissfully naive) view that if he can only tell the right lie, he can buy himself enough time to cash in on the right score and pay everyone off. When he places a bet (based on Kevin Garnett’s performance, naturally), his bookie (Mike Francesa – really!) tells him it’s the stupidest bet he’s ever heard.

Those who know me IRL might be asking if I’m mentioning Francesa as an excuse to post the gif of him spilling his Diet Coke. You bet your ass it is.

Watching Sandler perform here (and he’s quite good, if a bit loud – I wouldn’t watch Uncut Gems going in with a headache), I couldn’t help but think of William H. Macy’s Jerry Lundegaard in Fargo (another movie I hold in the highest regard). Lundegaard and Ratner are both imploding and get involved with schemes that are way above their heads. Ratner, though, is more explosive and tries to overcompensate his desperation with bravado and he is unaware that (mostly) everyone else sees him for the bullshit artist he is. Though the character appears written to accommodate Sandler’s skillset (he seems to only be able to contort his voice into “loud,” “way too loud” and “lying his ass off”), it’s difficult to see anyone else in the role.

The breakout star has to be Julia Fox, who plays, uhh, Julia, who works in Howard’s jewelry store and is his mistress outside of business hours. One podcast I listen to her said she has the potential to be Hollywood’s next femme fatale. I’d love to see her in a bigger part, maybe something noir-ish. Here, though, she steals most scenes she’s in as offering devotion to Howard (including in one very hilarious way) and someone he comes to realize is indispensable to his life.

Uncut Gems is a fast-paced ride that rarely gives you a moment to catch yourself. It’s immersive and the pacing is expert. While I can possibly seeing the Safdies make a bad movie in the future, I can’t see them making a boring movie. With Uncut Gems and the previous (and also great) Good Time, the Safdie Brothers film universe is located in the same sleazy New York neighborhoods that Martin Scorsese used in movies like Mean Streets, Taxi Driver, and After Hours, only they’ve been a little more gentrified a few decades later. It’s hardly a coincidence that Scorsese is billed as an executive producer on Uncut Gems.

Right now, Josh and Benny Safdie are the foremost documentarians of the dirtbag experience, and I, for one, am grateful for the work they are putting in.