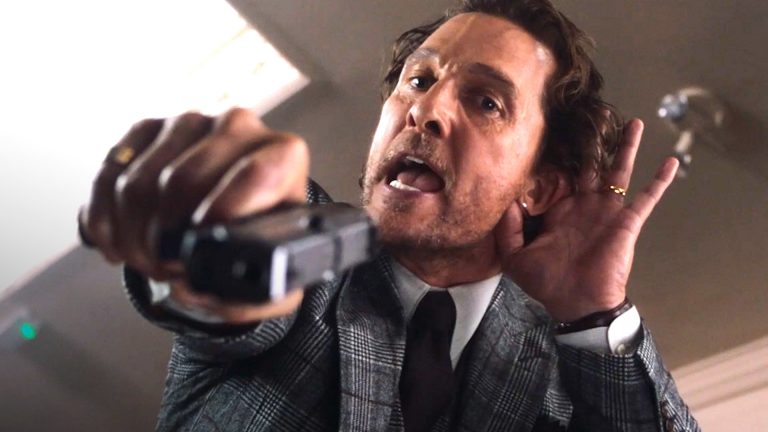 Guy Ritchie’s canon as a film director has alternately run white-hot and arctic-cold over the last couple of decades. For every Lock, Stock, and Two Smoking Barrels or Snatch, there’s been a Swept Away or King Arthur to put his virtues and faults as a filmmaker into sharp perspective.

The good news is that The Gentlemen, Ritchie’s latest, finds him at the top of his game. It’s far and away the best thing that I’ve seen him put his name on in a long time. And if it’s a sometimes-familiar ride, Ritchie and a game cast throw a metric ton of hairpin twists, action, and salty black humor into the machinery.

The Gentlemen revolves around Mickey Pearson (Matthew McConaughey), a US expat who’s spent several years cultivating a massive marijuana empire in several underground locations throughout the UK. Middle age is nipping hard at his heels, so he’s looking to sell the business, get out of the life, and retire in style with his wife Rosalind (Michelle Dockery).

Mickey thinks he’s got a buyer in the form of Matthew (Jeremy Strong), an avuncular fellow American with one foot in legit business and another in an expanding crime empire of his own. But on the eve of the sealing of the deal, things begin heading south. Some young-scrub street boys break into one of Mickey’s underground farms, making off with a good deal of product. Word of Mickey’s desire to retire leaks out, and a rogue’s gallery of rival upstart sharks smell blood in the water. Bullets (and curses) fly. Bodies fall. And crosses are doubled and tripled.

If you’ve watched more than one crime film in your life, you’ll be able to readily trace The Gentlemen’s DNA, from Superfly to Layer Cake (helmed by Ritchie’s former collaborator Matthew Vaughn, appropriately) to the old Spencer Tracy movie Boys Town, to the motor-mouthed rhythm of Martin Scorsese’s and Quentin Tarantino’s respective filmographies. That familiarity could be a liability, depending on where you’re sitting.

Some of the movie’s other faults stick out much more prominently. It’s broaching spoiler turf to be too specific, but one very ill-advised amateurish faux pas on Mickey’s part sets a lot of his woes into motion, and it feels incongruous given what a sharp cookie the guy is for much of the rest of the film.

Your mileage may also vary vastly when it comes to Ritchie’s still-existent streak of caustic political incorrectness. On the upside, he actually subverts expectations wonderfully in a few places. After introducing Dry Eye (Henry Golding), The Gentlemen’s primary heavy, as an exaggerated wild-eyed Asian thug so cartoonish the preview audience literally winced, narrator Fletcher (Hugh Grant, winningly playing against type) playfully reveals he’s just kidding, then paints a more accurate picture of Dry Eye as the smart, charismatic, and lethal adversary that he is.

But the movie does a disservice in the final reel to Dry Eye and Rosalind. The latter’s a witty, savvy, tough character who’s reduced to a revenge-fuel plot device in an unnecessary attempted assault—and Dry Eye’s participation in said assault kneecaps a lot of the classic cool Richie (and Golding) build up so nicely.

If you’re willing and able to navigate those speed bumps, however, The Gentlemen could hardly be more entertaining. Ritchie’s profane, hilarious, smart dialogue remains its own great special effect, firing off with dizzying glee as James Herbert’s head-spinning editing matches it slug for slug. Ritchie also has some meta fun with structure, telling much of the story in flashback/flash-forward form through oily blackmailer Fletcher, who relates the entire crazy-quilt tale to Mickey’s right-hand man Ray (Charlie Hunnam), over high-grade scotch and wagyu beef steaks.

There’s also no disputing the perfection inherent in the ensemble cast, across the board. McConaughey’s blend of easy charm, street smarts, and animal cunning fits Ritchie’s dark comic underworld like one of Mickey’s custom suits. Until Ritchie fumbles her character’s landing, Dockery’s a tartly witty delight, and Hunnam works his character’s stolid nature to great comic effect. Then there’s Colin Farrell, scrappy and no-bullshit hysterical as a boxing coach trying to keep his charges on the straight-and-narrow, with spotty results.

Everyone’s having a whale of a time here, but the juiciest character turn comes from Hugh Grant. Seedy as all get out and equipped with a lived-in cockney accent, he’s light years removed from the sloe-eyed romantic turns that made him a star back in the day. There’s a palpable joy in how fully he inhabits this sketchy but somehow charming cockroach of a guy—a classic noir skeeve who’s not nearly as sharp as he’d like to believe.

There are some entertaining nods to the contemporary here—especially the very funny hip-hop video made by The Toddlers, the gang of rounders who break into Mickey’s weed farm. But in the end, Ritchie’s latest cements his love of great pulp cinema, and he’s acutely aware of his place in that continuum.

His style, and his Gen-X pull date, ensure that The Gentlemen’s peopled with time-honored (though energetically, amusingly vivid) stock characters, and that the movie’s also peppered with vintage British pop jewels by Creem, Bryan Ferry and others. It’s only appropriate that The Gentlemen closes to the notes of “That’s Entertainment” by The Jam. The song’s sharply-strummed acoustic guitars and Paul Weller’s mellifluous but curt voice, like the movie that’s preceded it, are warm and cozy yet prickly; like a comfy blanket with more than a few pointed burrs embedded in it.