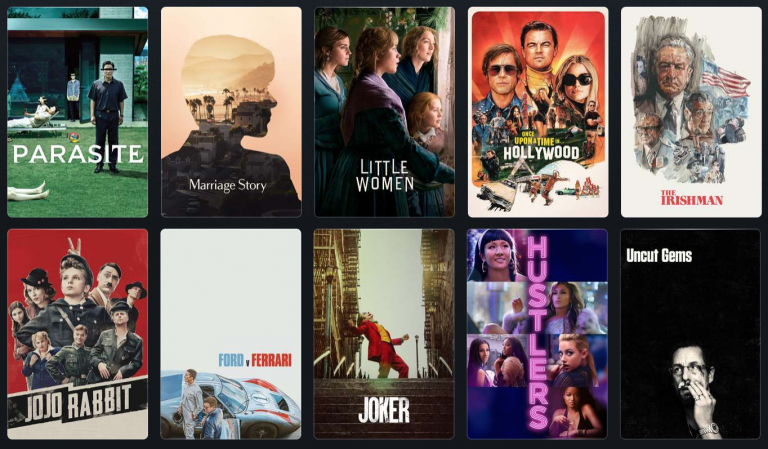 This week’s mainstream releases include The Turning, in which Mackenzie Davis downgrades from protecting the savior of humanity in last year’s Terminator to nanny Brooklyn Prince (the Florida Project) and Finn Wolfhard (Stranger Things, It) in a creepy old Maine Mansion full of dark secrets in the latest creepy adaption of Henry James’s The Turn of the Screw. More on this below. We have the return of Guy Ritchie, with a star-studded cast including Matthew McConaughey, Charlie Hunnam, Michelle Dockery, and Jeremy in a drug caper about getting rich on marijuana in jolly old England. Tony should have the scoop on it soon.

The Oscars are just around the corner and Cinerama’s… and the Winner Is film series gives you a chance to cram in your Academy Awards homework before the Big Show on February 9th, plus a few films that should’ve been nominated but weren’t because — despite efforts to diversify — the Academy is still too old, white, and boring. Case in point: the series starts on Friday with Hustlers, which features the incandescent Jennifer Lopez, an iconic fur coat,  and an unforgettable Fiona Apple pole dance. Although she wasn’t nominated because of reasons, she nevertheless leads a stellar ensemble in a rarely-examined perspective on the nature of work  and the outrageous (and, sure, criminal) ways that a group of women profited in the face of the financial collapse. Saturday has Ford v Ferrari (known overseas as Le Mans 66), which is fine but if you must see the boys go vroom vroom around the track for pride  it might as well be in the Cinerama’s Dolby Atmos. Sunday brings a rare opportunity to see Martin Scorsese’s late period masterpiece The Irishman on an actual movie screen. Don’t miss it. Monday has Joker and Joaquin Phoenix will probably win the Best Actor, laugh-crying edition, statuette so be prepared. Get your heart broken with Adam Driver and Scarlett Johansson in Noah Baumbach’s warm story of bicoastal divorce with Marriage Story on Tuesday. Taika Waititi plays jolly Hitler in Jojo Rabbit, a story of a twee little Nazi learning that Jews are people, too, via the power of a crush on Thomasin McKenzie as the refugee hiding under his mercy in the attic. It plays on Wednesday and might go home empty handed.

Friday has Bong Joon-ho’s hilarious and incendiary class-dynamics thriller Parasite. It’s inarguably  the movie of the year, agreed by almost everyone, including your friendly neighborhood Sunbreakers, and it has a real shot to be the first Korean film to win any Oscars, let alone the first one to take the big prize Best Picture (it grabbed the best cast award from the Screen Actors Guild and best editing award from the American Cinema Editors). Saturday brings another snub: Uncut Gems, the Safdie Brothers’s sensory overload with an incredible dirtbag performance from Adam Sandler at its center is perhaps not an Academy movie. I’m sure that many elder voters turned it off well before the hectic opening Ethopian mining disaster sequence turned cosmic with an Oneohtrix Point Never soundtrack and emerged into New York’s chaotic diamond district via a colonoscopy, but that doesn’t mean you shouldn’t get the full frazzling experience in front of Seattle’s biggest screen and most impressive sound system.

Sunday brings a calmer, but no less rewarding presentation: Greta Gerwig’s telling of Louisa May Alcott’s classic Little Women is quietly revolutionary in its own ways, from the way that the past and present are fragmented and stitched together to the incorporation of the real author’s biography in to Jo’s narrative. Finally, the series closes on Monday with Once Upon a Time … In Hollywood. Quentin Tarantino’s (maybe) penultimate film celebrates a near-forgotten era stars whose careers may not have lived up to their dreams, tinkering with form and history along the way. If you liked it the first time, it benefits from repeat viewings. If you were dubious, maybe this is the time to give it another shot.

Notably missing is the most likely best picture winner, 1917, a feat of Roger Deakins’s athletic filmmaking paired with Sam Mendes’s theatrical direction that depicts two British soldiers racing to complete a harrowing WWI mission in a near-continuous unbroken shot. The paradox of a two hour tracking shot that covers an eight hour endeavor means that its gritty depiction of the horror, futility, and trauma of war, is more a memory piece than documentary. It’s playing everywhere, was one of my favorites of 2019, and I won’t be even a little bit mad if it takes home the big prize.

Below, Tony has a few few more picks to get you through the weekend if you’re already stuffed full of Oscar bait.

Henry James’ novella Turn of the Screw spawned at least one certified cinema classic (1961’s The Innocents), so I’ll be guardedly optimistic that this latest adaptation, exec-produced by Steven Spielberg and helmed by the director of the pretty good biopic The Runaways, will be decent, at least. —TK

The Muppet Movie wasn’t the first ostensible kids’ movie to offer significant appeal to grownups as well as children, but it remains one of the best. The jokes land with multiple demographics, the characterizations of Kermit the Frog and the rest of the Muppets gang still connect, the slew of celeb cameos (yes, that’s Orson Welles playing the heavy) will delight cinema-holics, and only an irredeemable curmudgeon can resist those Paul Williams/Kenny Ascher songs. (Central Cinema January 24 – 29) —TK

The Romanians: 30 Years of Cinematic Revolution