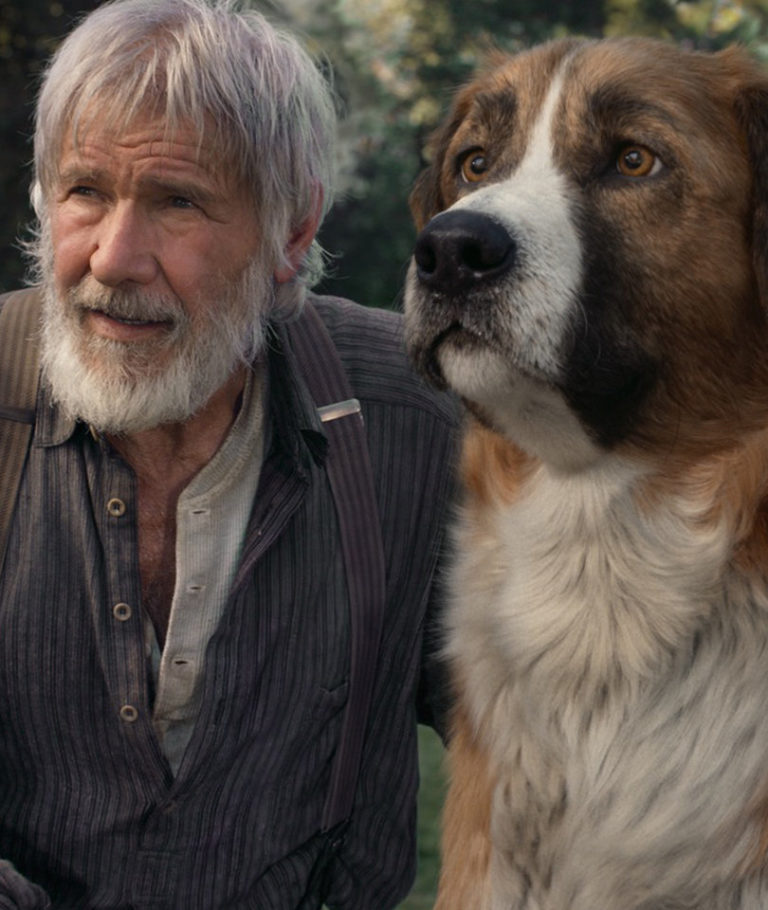 The brand-new The Call of the Wild marks at least the eighth time that filmmakers have gone to the well of Jack London’s beloved adventure novel of the same name. And it’s easy to see why it remains such a staple.

Set during the boom times of the late nineteenth century gold rush, it’s a heartfelt little survival adventure with a charming, charismatic dog at the center of it. And Buck, the canine hero of the book, remains one of the most beloved animal protagonists in the literary canon.

That said, complete fidelity to a 1903 book would most definitely not fly in these ostensibly enlightened times. The Yeehat Indians who emerge as the particularly nasty antagonists in London’s original are (understandably) omitted in director Chris Sanders’ new version, and there’s an embrace of diversity that–to Sanders’ credit–feels pretty organic.

Too bad the movie’s so treacly and undistinguished. There’s really not a lot that’s horrifically wrong with The Call of the Wild, but there’s nothing to warrant rushing into a theater to see it, either. And I’m hard-pressed to think of a recent film that’s as tone-deaf to the harsh reality of its technical limitations as this one (much more on that later).

The story, at its core, follows the original novel’s premise, as Buck, a goofy St. Bernard mix, lives a pampered life in a large California home, the house pet to the family of a well-off judge (Bradley Whitford in a blink-and-you’ll-miss-him supporting role).

Then the large, powerful mutt gets kidnapped by miscreants who sell the big lug up the river. Buck ends up a sled dog in the Yukon, learning how to survive in the harsh environment and having leadership of his sled team thrust upon him by fate and his own good doggie heart. An adverse twist of fate takes Buck out of sledding, and into a position as companion to an old prospector, John Thornton (Harrison Ford). Soon, Buck is feeling the tension between living in the world of humans and the (you guessed it) call of the proverbial wild.

Relatively A-level budget and casting aside, The Call of the Wild is really the modern-day equivalent of those competent but rather bland live-action Disney movies of the 1960’s and ’70s (or the direct-to-video kids’ movies that glutted video stores in the ’80s and ’90s). It’s an inoffensive little work in which Ford gives one of his more engaged latter-day performances, imbuing Thornton with a scruffy, bruised heart to match his backstory.

Sadly, the rest of The Call of the Wild leans heavily into its formulaic blandness, and it’s seasoned with enough sugary emotional manipulation to encourage a diabetic coma. Buck may as well have a halo orbiting above his furry head for the entirety of the movie, and Hal (Dan Stevens), the opportunistic jerkweed heavy, is so cartoonish, he should be twirling his mustache like a silent movie bad guy.

But The Call of the Wild stumbles worst in its visual presentation. Director Sanders’ background, and arguably his forte, is in animation: He’s co-written and co-directed Lilo and Stitch and How to Train Your Dragon with Dean deBlois. As such, The Call of the Wild leans hard–very, very, very hard–into computer-generated imagery.

Sanders’ Yukon is largely rendered in rather unconvincing CGI, so the massive vistas it presents feel less like lush panoramic wilderness, and more like a synthetic video game cut scene that’s been fussed over by tech nerds armed with a fleet of laptops. Astonishingly, The Call of the Wild was shot by Janusz Kaminski, Oscar winning Cinematographer of Schindler’s List and Saving Private Ryan (this must be the easiest paycheck the guy’s ever earned). It’d be less glaring if everything depicted were animated, but the human and computer-generated elements chafe against each other painfully.

The most painful of those computer-generated elements, ironically, is the movie’s main character. Sanders demands so much of his canine protagonist that his reliance on CGI makes sense from a practical standpoint. And there’s not a lot wrong with the imagery of Buck and the other (all CGI) animals in long shots.

But close up, the seams show in an epic way. Just when Ford’s crusty gravitas, or the primal efficacy of London’s original story, begin to pull you in, Buck’s over-expressive and hyper-anthropomorphic features remind you–to a painful degree–that you’re watching Harrison Ford hugging a frickin’ cartoon dog.

Then again, the non-press audience members of the preview I attended ate up Buck’s hammy CGI mugging, and his every exaggerated facial tic, with a spoon. Somewhere in the Great Cryogenic Beyond, Walt Disney isn’t likely smiling. But he’s surely nodding in grudging respect at how easily audience’s hearts can still be warmed by even the most synthetic plate of cinematic comfort food. ☆☆