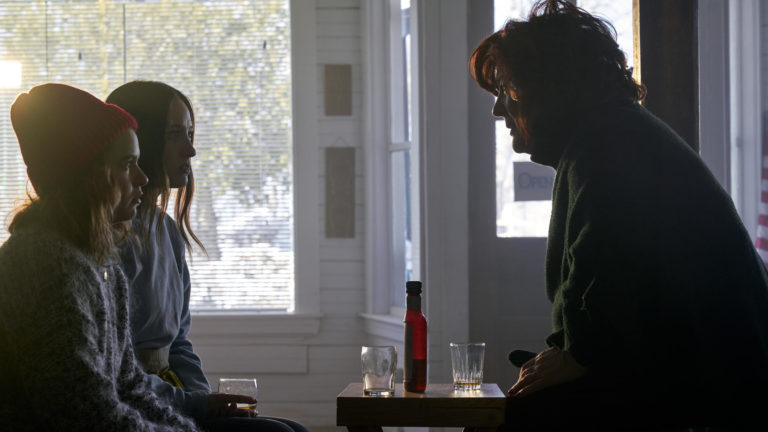 Blow the Man Down (streaming on Amazon beginning today, March 20) opens along the picturesque waters of coastal Maine, waves crashing against the rocks as a bearded fisherman (singer David Coffin) acapella-sings the traditional sea shanty that gives the movie its title. A chorus of other fisherman—bearded, scruffy, and rugged—join in as a montage of their work day fills the frame.

Coffin and those singers surface periodically in Blow the Man Down like a Greek chorus, giving this terrific neo-noir/dark comedy by co-writers/co-directors Bridget Savage Cole and Danielle Crudy a vaguely maritime-fable feel.

Cole and Crudy begin the story proper at a post-funeral potluck in honor of Mary Margaret Connolly, deceased proprietor of a seafood shop in the fictional town of Easter Bay, Maine. Mary Margaret’s left her daughters, eldest Priscilla (Sophie Lowe) and youngest Mary Beth (Morgan Saylor), with a mountain of debt, the impending foreclosure of the family home, and an uncertain future. There’s plenty of tension simmering beneath the grief: the headstrong Mary Beth postponed leaving Easter Bay to help care for her mom, and the now-dire financial picture practically ensures she’ll be trapped in the small-town environment that’s stifled her.

One night, Mary Beth winds up in a local bar drinking alongside Gorski (Ebon Moss-Bachrach), a thuggishly charming sailor she attempts to drive home while both of them are drunk. She wrecks his car. Gorski becomes violent. She kills him in self-defense. Mary Beth and her sister end up gruesomely disposing of the body. More murder, prostitution, and dirty money surface. And skeletons in the closet of this quaint little postcard town are exposed.

Cole and Drudy definitely haven’t crafted Blow the Man Down out of thin air. Their film shares some DNA with Fargo and Blood Simple, and this directorial duo shares the Coen Brothers’ fondness for left-of-center characters and noir-ish clockwork twists.

But if you dismiss Blow the Man Down as imitation Coen Brothers, it’s resolutely your loss. Cole and Drudy take a more grounded route through their story than the Coens would, tempering the Brothers’ fondness for dazzling labyrinthine construction with a welcome sense of working-class, small-town levelheadedness. Flashes of taut suspense emerge for sure, but there’s also a relaxed ease to Easter Bay that feels lived-in and richly regional. That warmth’s amplified by Cole’s and Drudy’s sure, deliberate touch and especially by Todd Banhazi’s lovely but never ostentatious location cinematography.

Blow the Man Down does such a good job of creating a sense of place and a gallery of empathetic characters that you almost don’t notice one of its greatest strengths: the wonderful, near 100% female-driven acting ensemble at its center. Aside from Will Brittain and Skipp Suduth (both pitch-perfect as the town’s savvy but aw-shucks deputy and his bumpkin sheriff boss, respectively), it’s largely the women who move the narrative here, whether its Lowe and Saylor as two believable, likable noir heels in way over their heads; or the three Easter Bay ladies (June Squibb, Marceline Hugot, and Annette O’Toole) who start out as stereotypical neighborhood snoops, until they gradually emerge as much more.

Great as all of them are, though, Margo Martindale steals the movie wholesale as Enid, a bed and breakfast proprietor/hair salon owner whose legit businesses conceal a much more shady agenda. One of those character actors you’ve seen in everything, Martindale makes the most of her turn as the movie’s main heavy, cloaking Enid’s cutthroat malevolence with a veneer of comforting geniality—like someone’s spiked a warm mug of cocoa with cyanide.

Cole and Drudy do a deft job of weaving Blow the Man Down’s story threads together by the end, and if few of those strands are revelatory, their execution is. Things don’t end with a bang, so much as they ebb to a close. That unforced but satisfying finale, elegantly ushered out with one more round of starkly beautiful sea shanties, gives this movie a unique flavor—film noir as small-town tall tale, related from one fisherman to another over pints of beer after a long, hard day on the water. ☆☆☆☆