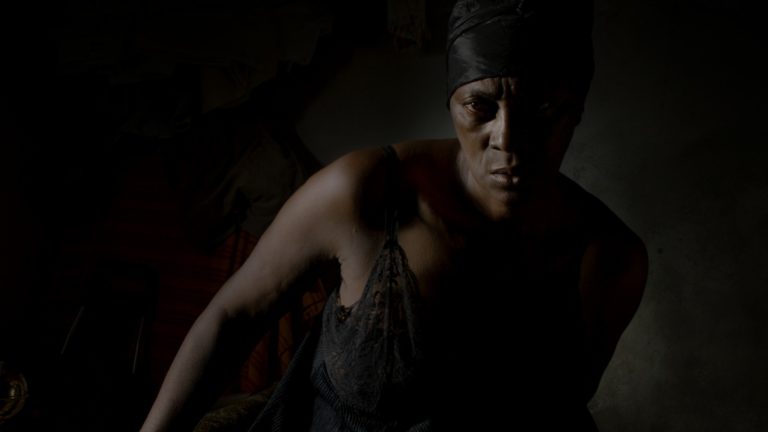 Vitalina Varela concerns a woman from the West African island-nation Cape Verde, who arrives in Portugal a few days after her husband, who long abandoned her decades ago, dies. Her husband promised to leave Cape Verde and establish a life in Lisbon and bring her there when he can afford to. He promised her a better life, and she held on to that belief far longer than he had. When she arrives in Portugal, she finds he lived in absolute squalor in the Fontainhas village, and gave up any sense of marital fidelity long ago.

When she’s in Portugal, she tries to put together pieces of his life and learns he kept many secrets. It’s heartbreaking to watch her give a sort of monologue where she recounts the promises he made to her and when she saw where he lived, realized that he was never in a position to make good on said promises. She also encounters Ventura, who has also appeared in quite a few of Costa’s films. He’s a local pastor whose parish has moved on years ago and now preaches to an empty church. He knew the husband well and helped enable his sinful life, Vitalina learns. She also begins taking care of her husband’s village and one person said, after eating a meal she prepared, that he forgot what home cooking tastes like. It’s heartbreaking. The movie is bleak and dark, but it is also surprisingly hopeful when it wraps up.

I think, though, the cinematography is the real star of this movie. Costa and his cinematographer Leonardo Simões have done a remarkable job with shadows and light to showcase certain elements. It’s very deliberate and makes you think of the choices to illuminate certain objects in terms of the story. I don’t think the slow pacing would’ve worked so well if the camera work wasn’t so visually stunning. It’s a movie I think film students would be well-served to study.

Vitalina Varela is such a well made movie that uses its minimalism to great effect. I can’t, though, emphasize enough how slow the movie goes, because it will bore you if you are expecting the plot to move faster than it does. I wouldn’t say it’s the slowest movie I’ve ever seen (and not even sure it’s the slowest movie I watched this month), but caveat emptor and all that.

Like I said, though, it very much rewards the patient viewer who lets the story unfold at its own pace, both through it’s gorgeous camera work and rewarding payoff.

{Vitalina Varela is available from March 27 through April 10 on Grasshopper Films’ website. Your $12 ticket helps support the Northwest Film Forum.}