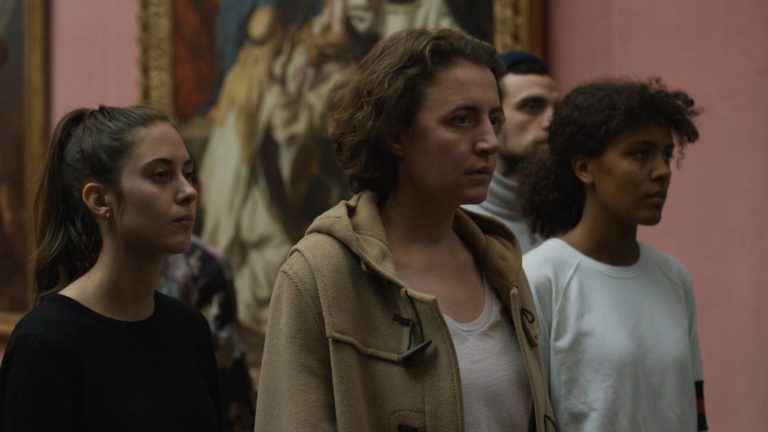 There’s something radical about watching I Was at Home, But…, the new movie (and tenth overall) from German filmmaker Angela Schanelec. It’s a slow-moving melodrama that is almost equally absorbing and off-putting. The generous term here is “austere.” The storytelling is nonlinear and I’m not entirely sure trying to piece it together in order, or make sense of the story, is worth the effort. There are also some really beautiful moments that arise from the slow pacing.

The movie centers around Astrid (Maren Eggert), a woman whose husband died and she’s grieving throughout and being triggered at any moment is a very real risk to her. There’s another element to her story where her son disappears for a week and returns with a toe that needs to be amputated. He’s also in trouble at school and on the verge of expulsion. There’s also a subplot where he’s a cast member in his school’s production of “Hamlet.”

Watching Astrid try to go through life is a bit challenging because she clearly hasn’t recovered from her husband’s death (and may never) and basic interactions (like buying a bicycle from an old man) are made more difficult by her fragile emotional state.

Yet for the deliberate slowness of the movie, I found the pacing to be one of its strongest elements. It was like watching a puzzle unfold and fit together (though I’m, again, not 100% certain that rearranging it into chronological order would produce a linear story).

I also thought the acting was quite good, particularly from Maren Eggert, who plays Astrid as a woman trying to navigate her life going forward, knowing that there won’t really be any “easy” days ahead of her, but she still doesn’t want your pity, only your understanding. It’s a difficult part to pull off, but I think she’s very successful. I found a real sense of empathy watching Astrid break down over her minor disobedience from her children.

I Was at Home, But… is the latest example from a filmmaking movement called the “Berlin School,” where German filmmakers prioritize character over plot and action. I think this is a great example of what that type of film can produce because of how invested I found myself with Astrid’s day-to-day life.

This is a lovely, deeply empathic, story told through a unique and deliberate style that I don’t run across every day. It’s a film that rewards patience, but in the end you feel like you watched something really intimate.

{I Was at Home, But… plays at the Northwest Film Forum starting tonight, March 11, and runs through Sunday, March 15. Tickets and more information can be found here.}