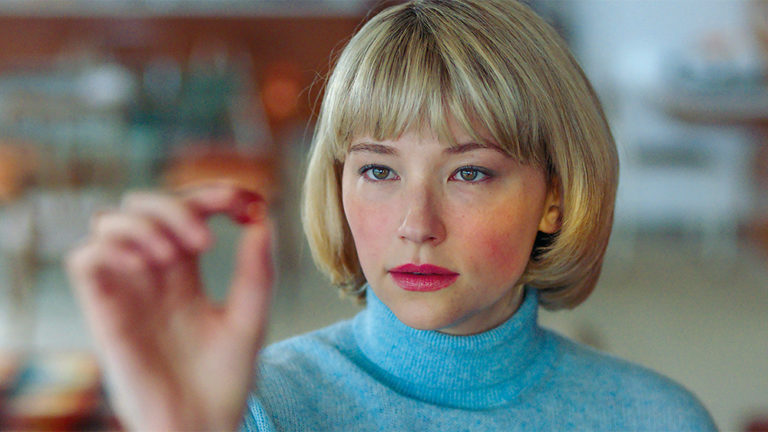 When Richie Conrad met his wife, Hunter, she was perfect for a young man with money: pretty, docile, and not the slightest bit unaware that he has greatly improved her financial standing from working retail to his housewife. He’s also the kind of guy who will ask his wife a question and begin looking at her phone just as she’s beginning to answer.

When we see Hunter (Haley Bennett, in an outstanding performance) at the beginning of the movie, I think of a line Oscar Wilde wrote in The Picture of Dorian Gray: “behind every exquisite thing that existed, there was something tragic.” Hunter is very clearly hiding a tragic past, but Richie (Austin Stowell) and his parents don’t really have any interest in learning about her. When Hunter’s mom (Elizabeth Marvel, whose eyes alone have given me nightmares when she plays “the Major” on “Manifest.”) asks what she did before meeting her son, she finds it pitiful and funny that Hunter answers that she worked in retail.

When Hunter learns she’s pregnant, and loneliness takes over her life, she starts to develop Pica, a disorder where you eat things that aren’t traditionally identified as food. In her case, it started with a marble and proceeded to batteries, thumbtacks, earrings, safety pins. I learned about myself that I am squeamish when watching people swallow thumbtacks and screwdrivers. Richie is, somewhat understandably (his wife is pregnant), apoplectic when Hunter has to go to the hospital to have the items removed from her stomach. He also becomes way more controlling, by first hiring a live-in nurse and then by demanding that her therapist tell him everything his wife tells her, as he is paying for the sessions. Richie works in finance (for his father’s company) and he views his wife (and forthcoming child) as business acquisitions. He and his parents don’t really show any regard for something other than outward appearances. “Don’t matter how you feel, only matters how you look,” my heroine Miranda Lambert once sang.

She tells her therapist that swallowing things makes her feel some sense of control that being a rich man’s wife doesn’t allow for. When Hunter overhears Richie on the phone having a conversation that convinces her she really is in this alone, it becomes a tipping point for her.

That is where the movie picks up its intensity. Hunter begins to take control of her life and knows she has to find the strength to leave. When that happens, I found myself completely absorbed with her story. It raised so many questions that I didn’t already know the answer to. Where would she go? What would she do? How could she survive?

There was a lot I didn’t like in Swallow: how Richie and his parents lack any real depth as characters, how Hunter seems at times to define herself by only her depression and trauma (we learn very little about who she is and what she wants), and the discomfort of seeing someone with one of the most severe forms of eating disorders. I do also like the movie as a character study more than I do as an allegory about overcoming abuse.

But Haley Bennett is also riveting in her performance as Hunter. It is a part that is physically and emotionally demanding, and she excels here. It’s not an exaggeration to say that this is a star-making performance (or at least one that could lead to more high-profile roles).

The great acting overcomes the discomfiting imagery and dearth of fully-developed characters. That’s enough for me. Just take some Tums beforehand.