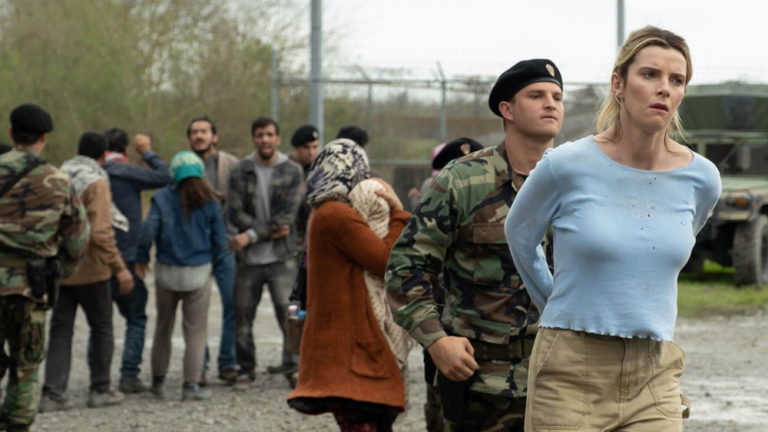 Every character in The Hunt falls into two categories, they either believe calling President Trump “Cheeto Mussolini” is funny, or they think “owning the libs” by not recycling is funny. If you laugh when people argue about white privilege while moving dead bodies into a storage room, boy do I have a movie for you.

I don’t want to mince words here: The Hunt is a disaster of a movie, and among the very worst I’ve ever seen. The movie tried to cash in on a “controversy” when Trump denounced it via tweet, before he’s seen it. It led to its postponement last fall, so now it’s here. Like with most things, he shouldn’t have bothered. The problem of the movie is not that it’s “controversial” it’s that it’s ultimately boring and inept with one of the laziest scripts I can remember. It fails as both a horror movie and as a comedy.

The plot, which you might be familiar with, involves a group of “elites,” wealthy liberals, who kidnap a couple dozen “deplorables” and take them to a remote manor to be hunted for sport on the grounds. That the “satire” here is mostly directed leftward doesn’t make it any more palatable. The movie plays like a bad Twitter argument in @CNNBRK’s mentions where “cuck” and “snowflake” get thrown around a lot.

It starts with a text thread that becomes public where word of a hunt is discussed, and then the kidnapped are taken to the manor where they are drugged and gagged, they wake up and the “elites” are shooting at them. One of the kidnapped, played by Betty Gilpin, is more resilient and harder to kill than the rest. It sets up a showdown with Athena (Hilary Swank, who is the proud owner of two Academy Awards). Here’s the rub: Betty Gilpin is actually really good in this part (and it’s largely apolitical, or at least not the part of an ideologue), and Hilary Swank is not a hack.

Another thing I hated was the way it stereotyped “deplorables” but largely ignores that it was retirees in the Villages and wealthy Republicans that did more to put Trump into office than blue collar workers and crackpot conspiracy theorists. Did Steve Mnuchin produce this?

It’s not that I don’t think Trump voters can be satirized, it’s that this is just lazy drivel that looks like it came from the dumbest political accounts on Twitter. No one speaks like these characters in real life.

I understand what the screenwriters (Nick Cuse and Damien Lindelof) and director Craig Zobel were trying to do here, but this ain’t it, chief.