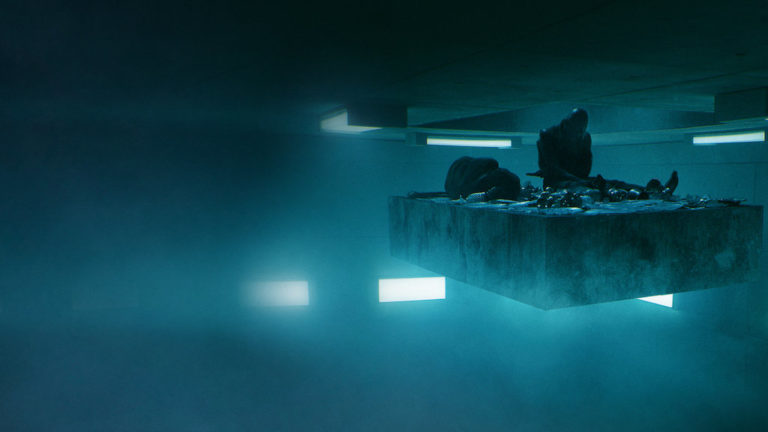 For anyone who’s even a passing fan of science fiction and horror films, the COVID-19 pandemic has edged even the wildest, most seemingly out-there scenarios uncomfortably close to reality, if not straight into full-blown, “You are here” mode.

In addition to the casualties directly due to the virus’s horrific physical effects, COVID-19 has also laid bare how tenuous the world economy has become—especially to anyone who’s not part of the affluent 1%. Disaster scenarios of gradual economic breakdown are likewise coming distressingly close to tangible reality.

As is, it feels like we’re facing a future in which the disparity between the haves and have-nots is so pronounced that even in America, purported land of the free, we could see a backslide into the sort of feudal lord/peasant dynamic that kept humanity in the Dark Ages for a couple of centuries. It could even be argued pretty persuasively that, on some level, we’re already there.

The Platform, a Spanish sci-fi/horror/sorta-action hybrid streaming on Netflix, doesn’t just examine dystopian class warfare: It’s a dystopian revolutionary’s graffiti art, angrily painted in blood-red, on the largest and most visible of metaphoric walls. The movie made the rounds on the festival circuit in 2019, largely slotted into cult/midnight movie programming (it won the Toronto International Film Festival’s People’s Choice Award for TIFF’s Midnight Madness series).

In normal times, it’d be too strong of a cocktail for most mainstream viewers, and perfect midnight-movie fodder. It’s bluntly transgressive, extremely violent, symbolism-heavy, and rife with the kind of visceral cinematic gut-punches that normally scare mainstream audiences shitless.

But these ain’t normal times. Since the Coronavirus cast its dark shadow over America a few weeks ago, The Platform’s become a Top Ten staple on Netflix, so this rather niche movie is touching some decidedly non-niche nerves. What might’ve seemed like a way too on-the-nose bit of bloody social commentary just two months ago, now feels scarily prescient today.

The film centers around Goreng (Ivan Massague), a young man who volunteers to be a sort of test subject for the government, in exchange for a diploma once he completes his six month stretch. After volunteering, Goreng wakes up in a cement cell with a cynical older cellmate, Trimagasi (Zorian Eguileor). Trimagasi, convicted of manslaughter, explains that this cell is one of many in a huge multi-level tower of a prison.

On Goreng’s first day, a large platform lowers in the center of the room, with one massive, five-star Michelin-caliber banquet on it. The catch is that the meal’s well-picked over by the time it’s reached him and Trimagasi. Both men, as it turns out, are at level 48 of who knows how many levels’ worth of cells. The day’s food rations start on the top floor—#1—then that same meal continues to descend as each successive level eats their fill. And human nature being what it is, social Darwinism, survival instincts, and greed kick in with a vengeance.

All of the above’s set up within the first ten minutes of screen time, so the remainder of The Platform follows Goreng as he’s shuttled from level to level, encountering other volunteers and inmates as well as learning firsthand how several different strata of humanity deal with what’s handed to them from on high.

This is as high-concept as high-concept gets, and of course we’ve seen variations on the premise for a long time, from Sartre’s No Exit to Samuel Beckett to the Canadian thriller Cube to every anthology TV series that’s ever taken a cue from The Twilight Zone. Director Galder Gaztelu-Urrutia delivers the allegory with the kind of sledgehammer blows that might normally seem like too much.

But we’re light years removed from ‘normally’ right now. And in that context, Gaztelu-Urrutia’s early and sustained use of extreme violence to get his point across here doesn’t feel like nearly the reality leap that it might have, pre-COVID. The broad, blunt beats of David Desola’s and Pedro Rivero’s screenplay don’t seem nearly as far-fetched as they might have, prior to March 2020. Something else that might’ve seemed like a liability, pre-COVID—the predictable, almost cliche way in which most of the humans in The Platform behave—resonates with a sad and terrifying inevitability. And if the symbolism in the film’s climax felt heavy-handed  before, it’s downright impactful when viewed through a pandemic-tinted lens.

There’s also no denying that, within the confines of their premise, Gaztelu-Urrutia and company have constructed an effective thriller, regardless of context. All of the performances land, from Massague’s intelligent, relatable protagonist to Eguileor’s scary but curiously sympathetic criminal to Antonia San Juan’s weary cancer victim attempting to fix things from the inside. The screenplay’s dips into bluntness also house some compelling (but thankfully not too detailed) world-building. And Gaztelu-Urrutia orchestrates suspense and violent action payoffs with the kind of mastery that inspires rabid cult followings.

We live in a political climate where, until recently, the current occupant of the Oval Office threatened to withhold vital medical resources from states, because their governors weren’t nice enough to him. And a significant portion of our lawmakers seem all too willing to sacrifice the elderly and immune-compromised at the altar of a capitalist economy. The concept of the 1% putting the 99% in cells and forcing them to scrape, fight, and kill each other for scraps doesn’t feel like much of a stretch. The future is now, Gaztelu-Urrutia is saying; and The Platform’s greatest strength amidst the current pandemic is sticking that future squarely in our faces—with sick, bloody, absurd, rage-inducing clarity.