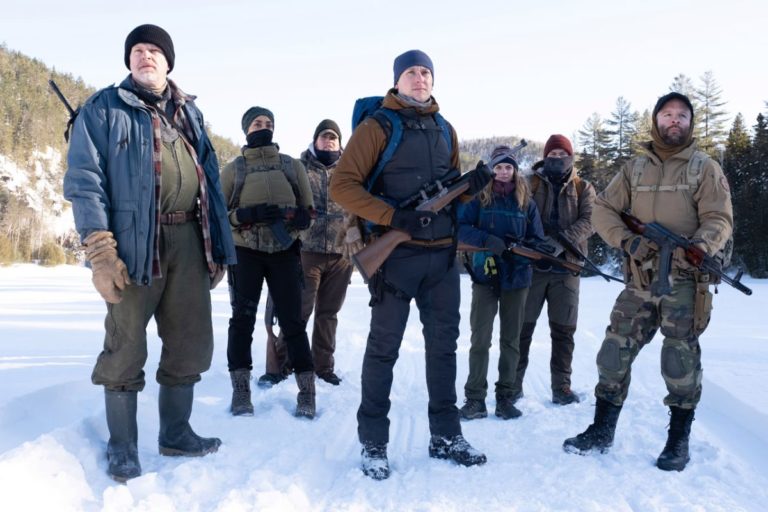 In The Decline, a new thriller that happens to also be the first production from Netflix in Quebec, the movie is set in a remote survivalist camp in BFE, Canada. Things go sideways fast when an accident turns fatal. It’s sort of like what would happen if all of the characters in And Then There Were None were already paranoid, or if everyone in Lord of the Flies were adults.

Alain (Réal Bossé) is the ringleader of the camp, an “influencer” in the survivalist space, if you will, and there are six others who join him to learn how to prepare themselves for anything apocalyptic-adjacent.

I liked this movie as if it existed as a social experiment, and in that sense it felt somewhat authentic. I caution, though, that your measure of authenticity will be influenced, in part, by whether you choose dubbed audio over subtitles and French dialogue. When a group of people get together and they all have paranoiac tendencies, it has the potential to veer dangerously off course quickly. Here, a person dies and the people are divided between whether to report the death to police. As there’s not a good explanation for why people who believe that being armed makes them uniquely safe, a consensus can’t be reached, and it’s soon everyone for themselves.

The movie is brutal and nasty, but I found myself drawn into it, aware that it’ll lead to a showdown with the two fittest survivors, albeit the payoff is underwhelming. I do wish there was a little more (black) humor to cut some of the nastiness, but I do believe cruelty is an innate characteristic, so it still felt true to human nature to me.

Obviously the timing couldn’t have been planned in advance (the movie was announced in 2018), but it feels timely where we’re in a period with claustrophobia as a built-in character, both for the film and audience.

Ultimately, The Decline is a fine choice to watch while under quarantine, as that is when, I think, it’ll generate the maximum thrills. It’s not a pleasant movie, but a compelling one. And you could do much, much worse.