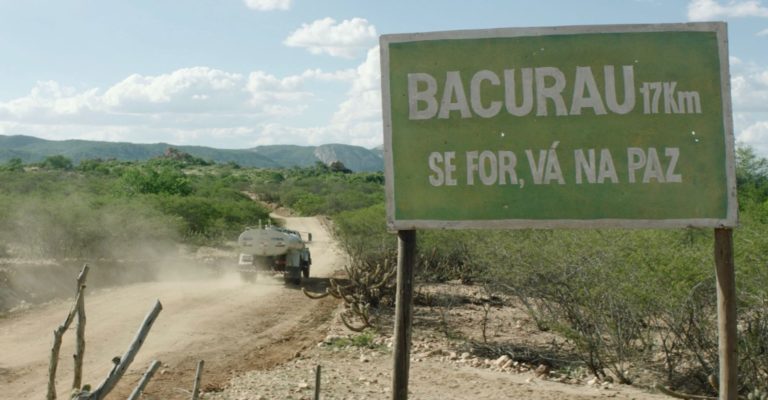 Bacurau opens with a pan in from space set to the soothing strains of Gal Costa’s “Nao Identificado“, centering the action “a few years from now” in Brazil’s Western Pernambuco, far from any lights visible from far above the earth. A water tanker, weaving to avoid potholes while crashing over abandoned coffins strewn on the side of the road, traverses a scrubby green desert en route to the mountains. As they approach the namesake town, a dusty sign welcomes visitors: “if you go, go in peace.” It’s a very nice idea, but there wouldn’t be much of a movie if everyone followed instructions.

We soon get the sense that all is not well in the sertao (the region’s dry, less populous backcountry). Water is being delivered to the town because “some assholes” dammed-up the river. The driver and the lab-coat-wearing woman who hopped a ride from him, talk vaguely about town revolutionary hiding up in the hills, on the run from the law, armed to the teeth with a band of followers, who was nevertheless unable to break the stranglehold on the water supply. This brief introduction sets an ominous tone of dangers lurking just out of sight that lingers over the rest of the film.

Soon, the truck arrives in Bacurau itself, depositing the passenger and her bright red rolling suitcase into the small town’s dusty streets. She’s soon greeted with a psychedelic pellet under the tongue before turning her luggage full of medical supplies over to a gathering crowd who have filled a small house for a ninety-four-year-old matriarch’s funeral.

In an interview with Film Comment, the directors describe the town as a “remixed quilombo” [an often isolated community, historically created by runaway slaves in an otherwise predominately white area], re-imagining it as “a black community, a historical place of resistance, but with some white, indigenous, trans, and other inhabitants.” The first hour plays like a strange tourist video — it’s a charming enough town complete with a nice museum and a flourishing sex trade — or at least an anthology of meeting the various townspeople.

The town doctor (Sonia Braga) and de facto authority figure shows up drunk and angry to the funeral; the town DJ leads the procession and spends the rest of the movie conveying news and personal messages via a loudspeaker in the town square; a notorious outlaw, made famous on television for committing one of the nation’s most lethal heists, has returned under a new name. Late one night, the doctor distributes recent set of deliveries: food products, basic supplies, vaccines, and warns them against the popular black label drugs best used as a mood inhibitor and applied via suppository.

This is all a bit odd, but things get stranger and stranger: a teacher doing an impromptu geography lesson finds that their town has literally disappeared off of Google Maps; a rich, white, slimy mayoral candidate drops off some books and leaves with some unwilling prostitutes; another resident spots a UFO hovering above; brightly-clad off-road bikers on ATVs show up unexpectedly and are greeted with a mix of hospitality, suspicion, and bawdy serenade; and by night the streets are filled with parading horses loose from a neighboring ranch. Only a few of these threads are followed through full character arcs, but shot in vibrant warm palettes, these introductions convey the diversity and challenges of rustic isolation as well as a sense of impending dread.

And that’s all before the bodies start piling up. About halfway through, the film makes a hard cut and reveals another side of some of the mysteries. Saying too much might spoil the surprises, but they involve prolific German character actor Udo Kier, a John Carpenter-inspired night capoeira sequence scored to industrial music, children in peril, a whole lot of guns, and a gory stand-off. There are certainly many sociopolitical forces being examined with relevance to current affairs. But it’s also a thoroughly entertaining ride in the spirit of classic western, with disparate factions banding together to exact justice for their town, albeit with a lot more hallucinogens.

Bacurau is currently streaming in “virtual cinemas” across the country by way of Kino Lorber’s partnership with local theaters, including Northwest Film Forum through April 15th.

The rest of the Sunbreak will be reconvening later this month for a Bacurau roundtable and we invite you to join us!