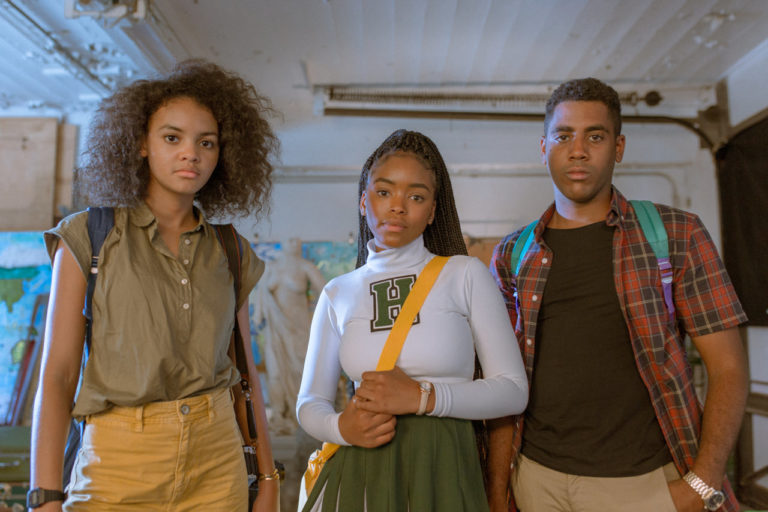 At Haldwell, an elite, high school boarding school, the student body is run by five cliques, with the two most powerful being the Bobbies (run by, well, Bobby) and the Spades, run by Selah (pronounced “sell-ah,” not “sea-lah”). The factions are reigned in by a peace treaty from a few years ago, after an incident no one wants to talk about that got out of control, but things start to unravel senior year.

Selah and the Spades was a hit at Sundance 2019 and is set to debut on Amazon Prime this weekend, and it could possibly spin-off a TV series. This is Tayarisha Poe’s debut film and you should be hearing her name often in the near and distant future. She’s a unique and exciting filmmaker.

Lovie Simone plays Selah, and she is destined to be a star. She’s just outstanding in this role. Selah runs the Spades like a tight ship while presenting an iron-clad confidence. The idea that a black high school student has to be twice as good as anyone else is drilled into her by her demanding mother. When Selah “only” scores a 93% on a test, Mom reacts the same as if her daughter failed it. So Selah has all of the pressures of high school, her parents, and keeping up appearances in front of her peers. She sees heartache and drama affecting classmates so she has no interest in dating. Another major concern: who will she transfer the power that comes with being head Spade for next year?

Enter Paloma (Celeste O’Connor), a junior that takes photos for the school paper. She impresses Selah with her naivete, and willingness to become a protege. Selah invites her to senior-only events and quickly sets her up for a smooth transition of power.

There’s also Maxxie (Jharrel Jerome), Selah’s right-hand. He’s been her most loyal and trusted member of the Spades, but lately he’s been messing up drug deals and Bobby (Ana Mulvoy Ten) sees an opportunity to seize power because of it. He’s distracted by a high school romance, but he’s also the first to warn Paloma about some of Selah’s worst tendencies and habits.

That is the gist of the plot, but the movie excels in so many other ways that it’s almost unimportant. The pacing is great and the movie avoids most of the high school cliches. The camera work from Jomo Fray is first-rate and does an exceptional job of bringing Tayarisha Poe’s vision to the screen. There is a scene where Paloma and Selah cross paths for the first time, set in Haldwell’s gymnasium, that is beautifully shot and edited. It’s my favorite scene in the movie.

Selah and the Spades isn’t a perfect movie but it has so much style that its faults are easy to ignore. I do, though, highly recommend spending some of your quarantine time watching this great movie. And remember it when Tayarisha Poe and Lovie Simone move onto bigger things in their impossibly bright futures.

Selah and the Spades is streaming now on Amazon Prime.