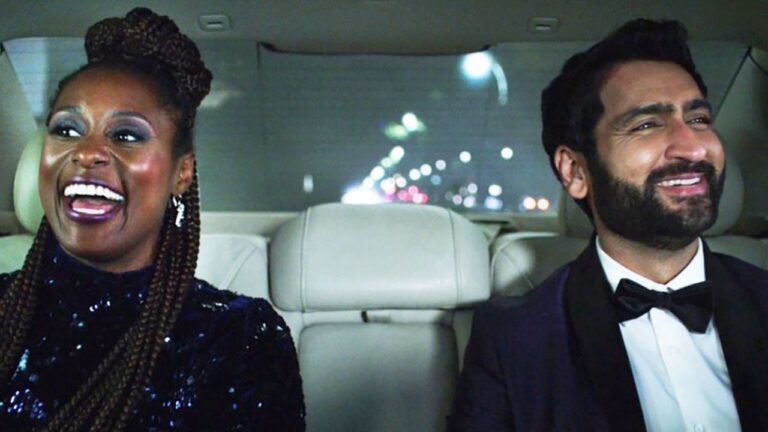 It’s a cliché, but it’s a cliché for a reason: Dying is easy: comedy is hard. The Lovebirds, a sorta rom-screwball-com that freshly premiered on Netflix yesterday, comes out of the gate ahead of the curve, in that it’s framed around two of modern comedy’s most adroit voices—actress/writer Issa Rae, creator/co-writer/star of HBO’s Insecure, and Kumail Nanjiani, who’s likewise shined as a cast member on Silicon Valley and Portlandia (among others).

That kind of pedigree auto-sets a pretty high bar that can’t help but elevate expectations. But these people are such comic treasures, and have created such wonderful work individually, it can’t help but chafe a little that the resulting movie is—to quote that sage philosopher Randy Jackson—just a’ight.

Rae and Nanjiani play Leilani and Jibran, a couple who’ve gone from stars-and-hearts-romance to relationship stagnation and constant bickering over the course of their four years together. En route to a party, they accidentally hit a bicycle delivery man who gets up dazed and flees frantically in the opposite direction. Before long, however, a man claiming to be a cop (Paul Sparks) pulls that classic cop-movie trope of commandeering the couple’s car while they’re in it, in hot pursuit of Delivery Driver.

The pursuit of the guy on the bicycle soon morphs into a literal hit, as Alleged Cop fatally runs over Delivery Driver and splits, leaving Leilani and Jibran stunned. And the only way out of the very incriminating mess appears to be for the fractious couple to go on the lam, solve the murder, and exonerate themselves.

It doesn’t take a Pulitzer-Prize level comic mind to ascertain the beats taken, and the general pathway of the story from there. In The Lovebirds’ defense, it’s engineered to be a fun fluffy bit of comedy, not a major work of cinematic art. And I’d be the last person to throw shade on anyone finding some comedic comfort food in what Showalter and his leads present here.

Still, the movie’s doggedly risk-averse, formulaic story and structure is frustrating given the talent on display: It’s significant to note that neither Showalter nor the two stars appear to have contributed to the screenplay. Nanjiani and Rae are both charming as hell (the former’s irresistible star turn in The Big Sick proved he can be both funny and a credible romantic lead), and they’re obviously having fun riffing off of one another. But the movie establishes the honeymoon phase of Leilani’s and Jibran’s romance in a condensed, perfunctory fashion, a decision that dampens the potential romantic chemistry. In the end, we’re watching two great comic talents, having fun bouncing off of each other—not a couple in crisis that happens to be funny. Even the frothiest romantic comedy needs that extra spark to really work. And while the movie goes down smoothly enough, this is a movie whose gags are more likely to elicit polite chuckles than belly laughs.

If you already go into The Lovebirds coasting on the vapor trail of ample goodwill Rae, Nanjiani, and Showalter have generated with their individual work, you’ll find it a pleasant-enough time killer. But you won’t care that much about the two lovers at its center. Dying may still easy, and comedy is still hard. But The Lovebirds, good-natured and amiable as it is, falters because it forgets that depicting a believable onscreen romantic couple is no cake walk, either. ☆☆½

The Lovebirds is currently streaming on Netflix.