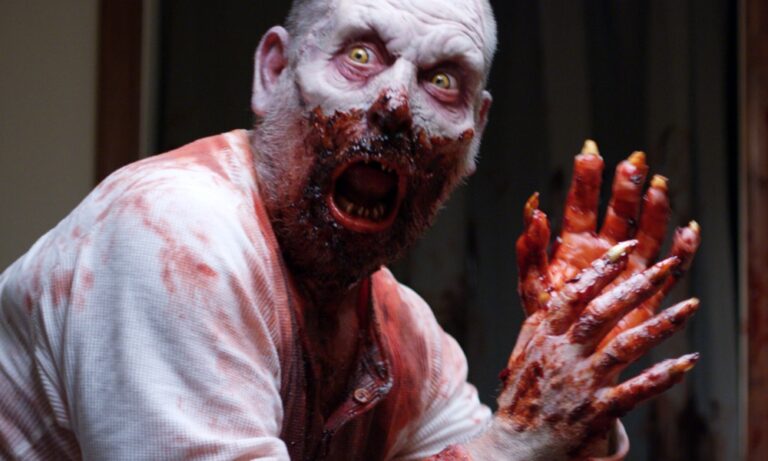 With his sophomore feature film Uncle Peckerhead, writer/director Matthew John Lawrence has delivered a breezy, sweet-natured little horror comedy— perfect fodder for ducking into an air-conditioned theater on a lazy weekend. And if it’s not quite a home run on par with Shaun of the Dead or What We Do in the Shadows, its cast, buoyant energy, and some genuine belly laughs provide ninety-some minutes of goofy, viscera-soaked, and welcome escape.

Punk-pop band Duh experiences one epic bummer when their van gets repossessed on the eve of their first tour. Desperate for a set of wheels, bassist/singer Judy (Chet Siegel) begins papering every van in town, until amiable, slow-drawling Uncle Peckerhead (David Littleton) responds, offering his services as wheelman and roadie in exchange for gas and a few bucks. There’s just one catch: Peck turns into a ravenous, cannibalistic zombie-monster every night at midnight, and the various parties that cross Duh’s path provide ample fodder for Peck’s gut-munching.

From that initial setup, Uncle Peckerhead becomes a hybrid of road movie, zombie flick, and rock and roll, as Duh deals with the usual touring-band travails (jerkweed promoters, pompous rival bands, etc.), as well as the cannibal in their literal driver’s seat.

Balancing horror and humor is never a cakewalk, and Uncle Peckerhead’s not immune to a few rough spots. I’m all for a movie leaving points of ambiguity in a character’s origin, but Peck’s backstory is so vaguely sketched, it feels less like deliberate cultivation of mystery, and more like a storytelling shortcut. Some of the jokes land with a thud, and while Uncle Peckerhead’s ending offers a refreshing left turn from the manufactured cheeriness of a formula comedy, the twist feels rushed and inconsistent with the 80-some minutes preceding it.

The good news is that the movie’s lovable enough to stick with. Lawrence’s eye for band life is affectionate and knowing, and the three actors playing the band members feel right. Jeff Riddle lends an air of goofy sweetness as Duh’s guitarist Max, and Ruby McCollister gives drummer Mel a welcome dose of deadpan acerbic wit. The anchor to the band, and the ensemble, turns out to be Siegel. Judy is equal parts Girl-Scout cheerleader, sweet-natured softy, and bass-playing badass—played to winning pitch-perfection. It also helps that Duh’s actual music (composed by Riddle, who’s a legit guitarist and singer for real) is a likably catchy but still heavy blend of TacoCat, spastic art-punk, and a much less annoying version of Green Day.

This blend of buddy-road bonding, gore, and projectile diarrhea wouldn’t be nearly as much fun as it is, however, without David Littleton’s Uncle Peckerhead.  Guileless, slow-talking yet sharp, and equipped with a southern drawl that sounds like a redneck variant on a Tennessee Williams character, Littleton crafts a fully-realized and strangely lovable character who’s genetically incapable of not stealing any scene he ambles into. He, the rest of the cast, and the funny snapshots of band life are so right, it almost makes you wonder if just ditching the horror in favor of upping the humor and sweetness might’ve made this already-engaging little indie movie legitimately great.

Uncle Peckerhead is available for rent or purchase on demand from Alamo on Demand, iTunes, Vudu, or–if you must give Jeff Bezos your money–Amazon Prime.