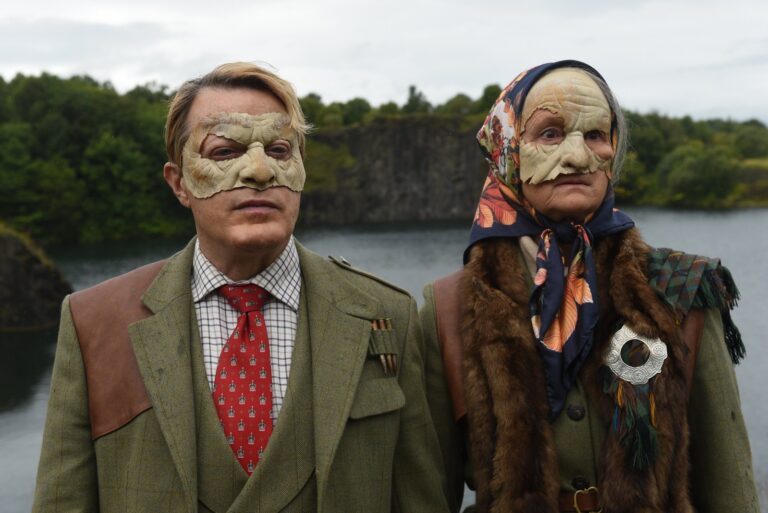 Get Duked! (streaming on Amazon Prime beginning today) is one interesting cinematic mongrel. It’s a teen comedy whose DNA includes strains of Trainspotting, Cheech and Chong’s Up in Smoke, Harold and Kumar Go to White Castle, and The Most Dangerous Game. And if it doesn’t quite stick the landing, the journey to the runway’s an amusing and sometimes surprisingly sweet one.

Three teenage reprobates—dryly funny Dean (Rian Gordon), dim-bulb Duncan (Lewis Gribben), and swaggering would-be rapper DJ Beatroot (Viraj Juneja)—are not-so-gently coerced into a team-building camping trip through the Scottish Highlands. They’re joined by naive egghead Ian (Samuel Bottomley), who’s voluntarily making the journey to help garnish his resume for college applications (there’s a fancy laminated Duke of Edinburgh Award for completing the hike). Together the four boys head into the open spaces, none too eager to be slogging through the elements without a cell phone signal. Fortunately, the unsupervised jaunt gives them an opportunity to engage in that time-honored teenage tradition of doing drugs and acting like goofballs.

Soon after they begin smoking hash and farting around in the boonies, the four young travelers veer beyond the mapped path. The perils of their misdirection prove to be more than just shoes caked with cow manure, however: They wind up in the crosshairs of two very entitled masked psychopaths, The Duke (Eddie Izzard) and The Duchess (Georgie Glen), both of whom have an axe to grind with wayward lower-class riff-raff.

If you’re suspecting a lowbrow comedy that’s got a little more social awareness and genial good nature rolling around in its ADD head than your typical American teen flick, you suspected right. Dean, Duncan, Beatroot, and (to a lesser extent) Ian are all working-class kids, and when they’re under attack, it’s clear that director Ninian Doff’s out to take some pokes at England’s ruling class. Izzard and Glen more than hold up their end, delivering a very funny riff on upper-crust elitism: the former in particular gives The Duke a silky malevolence that bears more than a slight resemblance to Malcolm McDowell. Rest assured, however, that the movie’s more occupied with being light entertainment than it is with sociopolitical polemic.

Even better, the quartet of young actors at the center of Get Duked! click in a major way. Gordon’s a riot with his laconic stoner (hasher?) delivery, and straight-arrow Ian’s given enough unforced sweetness by Bottomley to sidestep annoying caricature. Meantime, Gribben, a giraffe-necked, strangely lovable cross between Paul Bettany and Willem Dafoe, delivers Duncan’s amiable bonehead charm with gusto.

Doff wisely spends the most hang time with DJ Beatroot. As played by Juneja, he’s the funniest of the four, a good-natured suburban kid who’s run with the wrong crowd, is prone to epic fronting and—like any burgeoning rapper worth his high tops—composes hilarious rhymes centered around his junk. Despite their propensity for troublemaking, DJ and his mates are genuinely likable blokes, so much so, it’s a shame we don’t spend a little more quality time with them before shit gets (un)real.

Get Duked! manages to toss in plenty of absurdity—Monty Python-style ultraviolence, some choice comic jams from Run the Jewels, a suspect and amusingly priggish high-school phys-ed teacher (Jonathan Aris), goofy careerist backwater cops, hallucinogenic bunny poop, and a battalion of backwoods farmers tripping on said bunny poop. And while Doff delivers reliably on all of the above, the jokes merit pleased chuckles more frequently than straight-up belly laughs. There’s also a strange lack of urgency to the perils wrought on the boys. As a result, the movie never really cuts loose with the humor, or the horror, like it should.

Then again, Get Duked! deserves major props for being a teen comedy that never descends to the mind-numbing mean-spiritedness of its worst stateside counterparts. With the world in quarantine, and a stereotypically ugly American leading this country headlong into the crudest dark corners of his id, the affably good nature of Get Duked! feels like blissful escape—with or without a mouthful of psychedelic rabbit turds as travel aids.

Get Duked! is streaming now on Amazon Prime.