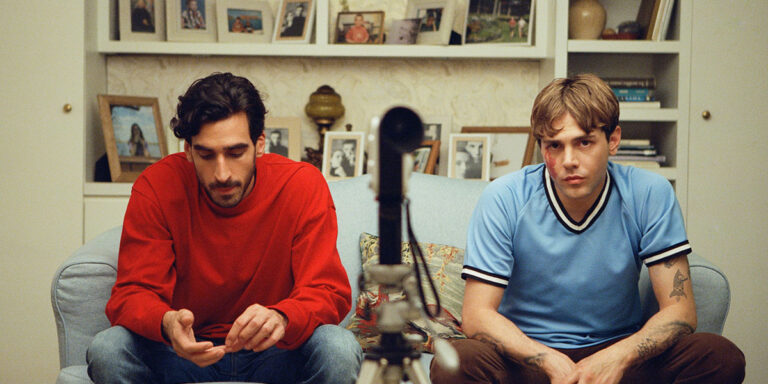 Despite having collected a string of prizes (including a Grand Prix at Cannes) since his brash, expressive, debut I Killed My Mother, the films of Quebecois auteur Xavier Dolan always seem to find a rocky, extended, road from the festival circuit to stateside release. Such is the case with Matthias & Maxime, which, year and a half after its 2019 Cannes debut has finally found its way to American audiences not by way of theatrical release, but directly into pandemic-stricken homes thanks to its acquisition by global arthouse streaming service MUBI.

Here, writer-director Dolan is back in front of his own camera with a port-wine birthmark, a bunch of tattoos, and a slightly sly slacker appeal as half of the title pair: Max is a late-twenties bartender on the verge of ditching his life in Montreal for a couple years in Australia for no specific reason other than that his passport’s good throughout the Commonwealth and he’s ready for a change of scenery. Gabriel D’Almeida Freitas plays his lifelong friend Matt, tall, conventionally handsome, settled into a long term relationship with his girlfriend, and climbing the ranks at a high rise law firm. When their weekend getaway with a bunch of old pals at a scenic lakehouse is crashed by a friend’s film student sister, a drunk dinnertime wager finds them cast as actors in her “expressionist-impressionist” final project (Dolan’s ability to lightly poke fun at himself via this bratty young director is some kind of maturity). In a bit of a Humpday twist, the roles require only a few minutes of making out on the couch, but as enlightened as the duo play it off, the moment of staged intimacy unsettles the balance of their platonic relationship just as their lives hurtling toward major crossroads.

The big move abroad looms over the film like a countdown, and Dolan structures the action as a series of episodes building toward his departure. While Max putters around the city tying up loose ends — including a signature messy relationship with his single mother (frequent collaborator Anne Dorval returns with the boiling rage of a parent under legal guardianship) — Matt finds himself quietly questioning the elements of his conventionally-stable, upwardly-mobile lifestyle of family dinners and entertaining perspective law firm partners (Harris Dickinson hamming it up as the ultimate Toronto d-bag). While the visual aesthetic is more subdued and less flamboyantly expressionistic here, Dolan’s a master soundtrack curator (from Britney Spears “Work Bitch” to Phosphorescent’s “Song for Zula”) and his choices as an editor are exceptional, parceling out revelations slowly, and often cutting at crucial scenes so the ones he eventually holds are all the more gut-punch effective.

As the series of going-away rituals play out — packing, garden parties, last game nights — Dolan captures the acute dynamics of biological and chosen families, boisterous overtalking friend groups, and compartmentalized emotions, and confusion when one’s once reliable geographies shift. Thrumming with all the familiar anxious energy, suppressed yearning, and brimming nostalgia of leaving it all behind, Matthias & Maxime is well worth checking out MUBI, at least through the free trial period.

Matthias & Maxime is streaming exclusively on MUBI. Days off it’s Venice debut, they also have In My Room, Mati Diop’s filmed-in-confinement follow-up to Atlantics.

In local streaming, SIFF adds Our Time Machine, in which father son confront the circle of life with life-size mechanical puppets, to their virtual cinema’s marquee. Northwest Film Forum has Feels Good Man, Arthur Jones’s documentary about how artist Matt Furie tried to reclaim his Pepe the Frog from an hateful icon of the internet’s alt-right. And the Grand Illusion hosts Jimmy Carter: Rock and Roll President, which reveals Carter’s friendships with the likes of Willie Nelson, the Allman Brothers, and Bob Dylan and the role that these bonds played from his nomination through his time in the White House.

Elsewhere in the world of streaming, this is a big weekend for major international film festivals coping with the pandemic by opening their doors to the internet. Those lucky enough to be in Canada have access to a view broad selection from this year’s Toronto International Film Festival on their digital platform (warning, they know you’re on a VPN). US audiences, though, can begin planning imaginary visits to the New York Film Festival. Much of NYFF’s lineup will be available in limited viewing windows beginning next week through Film at Lincoln Center’s Virtual Cinema. This includes a generous selection of high-profile features including Chloe Zhao’s Nomadland (starring Frances McDormand during the pandemic, and filmed before Zhao makes the leap from the small-scale intimacy of The Rider to the blockbuster scale of Marvel’s upcoming The Eternals); three new films from Steve McQueen set in West London (Red, White, and Blue; Lovers Rock; Mangrove), Spike Lee’s filmed version of David Byrne’s American Utopia; a new short film from Pedro Almodovar starring Tilda Swinton (The Human Voice); Michelle Pfeiffer and Lucas Hedges in a film adaptation of French Exit; Sofia Coppola directing Bill Murray and Rashida Jones (On the Rocks); and a black and white German documentary about a mother pig (Gunda). There’s a lot to choose from and in this year without in-person festivals, I’m a bit giddy to curate a week of screenings for my own lockdown screening room. It’s not clear to me whether there are unlimited tickets to these virtual screenings; so I stocked up yesterday when sales opened to the general public just in case.