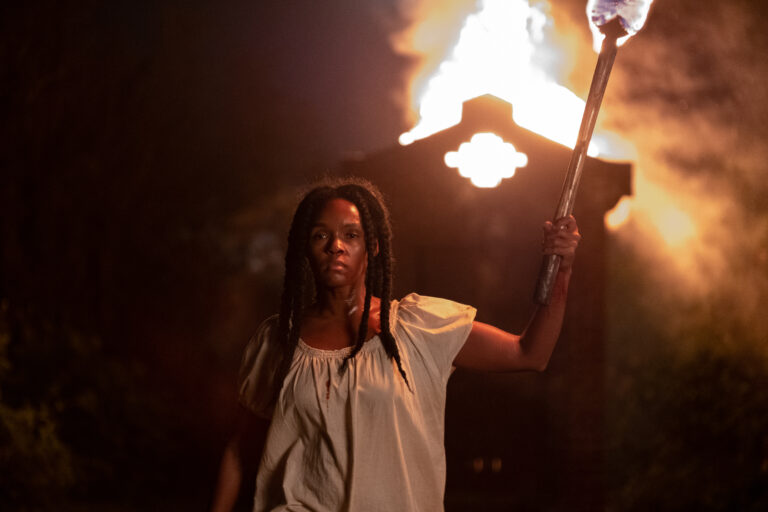 Antebellum opens with a long tracking shot on a Louisiana plantation, Spanish Moss draped from majestic trees, a little girl in a yellow dress playing in the yard under a crisp blue sky, but as the creepy strings swell, the roving camera surveys the rest of the grounds to reveal a tableau of terror. Confederate soldiers prowl the grounds, leading a horse with an unconscious woman draped over its back past the sparkling white mansion, through slave quarters, to the lush green fields where she rouses to witness an apparently enslaved man and woman torn apart amid. His neck is bound with a spiky iron collar and as he’s dragged away we watch as his eyes widen in horror just as a lasso-turned-noose finds its way around his beloved’s fleeing neck. The scene is horrific, but, like the rest of the film that follows, these scenes of relentless subjugation are composed with glossy painterly aesthetic and filmed in absurdly slow motion to force the audience’s eyes to linger on these images of despair. With their background in advertising and crafting social justice campaigns, you can appreciate the impulse of writer/directors Gerard Bush and Christopher Renz to have cinematographer Pedro Luque Briozzo pull pre-1940s lenses from the Panavision vault to replicate the look of Gone With The Wind for modern sensibilities, but while they don’t exactly glorify these images of a repugnant era, this fixation on juxtaposing beauty and misery makes for a very long 105 minutes.

Our primary avatar in this nightmarish world is the singer/actor Janelle Monáe, who brings stillness, determination and dancer’s impressive limber physicality — familiar to anyone who’s seen her innovative live performances — to the role of an enslaved woman trapped in a creaky cottage in hellish captivity. We know little about her: a Confederate general tortures her until she agrees to call herself by the name given by her captors and menaces her nightly with sexual violence. By day, her compatriots mysteriously look to her for salvation, but she mostly rebuffs their pleas for a plan. The plantation itself is populated by an icy mistress (Jena Malone, doing some inspired accent work), her creepy daughter, and a host of confederate soldiers, but there is negligible interest in developing characters beyond terrified suffering or a one dimensional evil in service of depriving the enslaved population of even the smallest freedoms that they hay have been used to in their previous stations. The indignities and abuses pile up over the first forty minutes — beatings in the cotton fields, incongruous torchlit “blood and soil” chants, sprawling outdoor candlelit dinners celebrating Union defeats at which women are promised to serve any request of returning soldiers, and punishment for disobedience by consignment to ash in the “burning shed” — with the barest sliver of hope in the form of Eden’s solitary preparations for a potential escape.

Near the midway point, a reprieve from this agony arrives in the form of a flashback that reveals the contours of Eden’s life before she arrived at the plantation. Here, Monáe has the opportunity to shift from silent suffering to embody a vibrant woman with friends, family, agency, and a joie de vivre. There are some nice beats in this interlude and the film’s few laughs by way of an old friend played by Gabourey Sidibe, but the relief comes at the expense of betraying audience trust by upending a lot of what came before. I’m being a bit coy about the details here, if only because the film itself seems to be far more interested in creating a sense of mystery and building suspense than whoever cut the very spoilery trailer.

[To get a smidge meta: I’m fascinated by whatever process led the studio or marketing to go to war with the structure of the film. Even though I agree that it would’ve been more effective to dispense with the gimmick of non-linear storytelling, it’s very strange that promotional materials appear to be in open conflict with the aims of the filmmakers. As is, the film’s structure serves only to needlessly deprive the audience of information while knocking the wind out of an already flimsy plot that relies on disorientation to distract from uniformly shallow character development.]

When the action picks back up, a shift to a more conventional thriller mode attempts to provide momentum, and the familiar beats at least signal that an end to our time with these traumatic images is on the horizon. Even as Bush and Renz craft striking subversions of confederate iconography that still haunt us today and construct sequences of violent retribution, the abuse of slow frame rate to revel in their potential One Perfect Shot entries has the effect of making these sequences approach eye-rolling comedy instead of a satisfying payoff.

It’s possible that Antebellum may have played better in theaters: a packed house reacting to cruel injustices, gasping in surprise, or even groaning at creaky revelations can go a long way toward overlooking flaws so long as you’re having fun. Arriving after a summer marked by mass demonstrations for overdue racial justice, it’s easy to understand the impulse to subvert the images of our country’s reprehensible past to have relevance to the ongoing struggles of the present through the tropes of the horror-thriller. But watching the litanies of debasements at home, it felt like the filmmakers became so enamored with their glossy surfaces that the end result was more iconic lookbook than substantial statement.

Elsewhere, local theaters continue to roll out virtual viewing options. Northwest Film Forum’s programming is dominated by the 23rd annual Local Sightings Film Festival. Tony and Jenn have an excellent deep dive into all the local features, shorts, and special presentations that will be available from tonight through September 27th, all priced on a sliding scale to maximize accessibility.

To their substantial streaming library, this week SIFF adds A Chef’s Voyage, documenting Manresa chef David Kinch’s marathon staging of nine meals over ten days in iconic French settings; Blackbird, a cheery drama in which Susan Sarandon summons her all-star family (Kate Winslet, Mia Wasikowska, Sam Neill, Rainn Wilson) to a beach house before she dies from ALS; and political documentary Softie, about what happens when Boniface “Softie” Mwangi, a human-rights activist and one of Kenya’s most provocative photojournalists, decides to run for office.

The Grand Illusion rolls out Alone, a Pacific-Northwest-set cabin-in-the-woods kidnapping thriller, and Made in Abyss: Dawn of the Deep Soul, the continuation of Masayuki Kojima’s epic animated adventures.

Finally, if you’re ready to get out of the house to see a movie but aren’t willing to drive to wherever they’re actually showing them, Scarecrow Video and their neighborhood partners are co-presenting a Carpool Cinema series at the Phinney Center Lower Lot. This weekend features Beasts of the Southern Wild, September 24-25 bring Chadwick Boseman’s Jackie Robinson biopic 42, and the series concludes on October 2-3 with Jordan Peele’s modern social justice horror classic Get Out. The lot opens at 7:30 and movies begin at dusk.