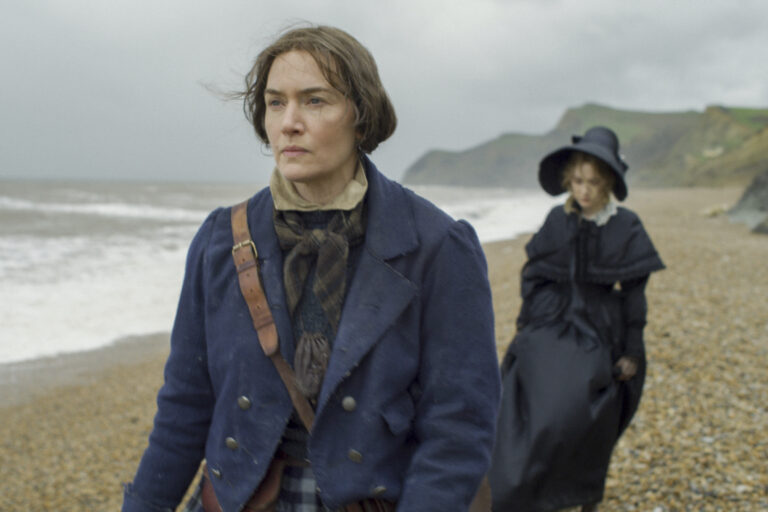 Portrait of a Lady on Fire may have set unattainable standards for seaside lesbian romances. Whereas Céline Sciamma’s sensuous story of self-discovery was a sun-dappled revelation, Francis Lee takes us to the dreary wind-ravaged coastline of Lyme Regis for a far more stalwart affair. There, paleontologist Mary Anning (Kate Winslet in a sturdy performance based on a real-life historical figure) trudges the rocky shores on the lookout for fossils, which she excavates and sells alongside seashell-clad souveniers in her mother’s modest shop. Having achieved some notoriety for her legendary insights (but not acceptance via misogyny) in British paleontological circles, she herself is something of a tourist attraction for aficionados passing through the geologically famous seaside resort. One such fossil enthusiast (James McArdle) hires her, first for a day of guided rock hunting, and then — somewhat inexplicably — to watch over his young wife (Charlotte, played by an uncommonly-muted Saoirse Ronan) when she proves too delicate to accompany him on his tour of European paleontology hotspots.

Proud Mary, peeved by poverty and a lifetime of disrespect from the boys’ club of British scientists, isn’t exactly pleased to have a new assistant. Nor is frilly, privileged, Charlotte an ideally-suited companion for the harsh life of muddy rock-hunting. An dip in the English Channel (the era’s cure for depression), however, brings the women closer together (literally), when Charlotte catches a fever from the icy waters and inexplicably is left to recuperate in Mary’s tiny bedroom rather than in her own well-appointed hotel room in town.

While a relationship of sorts develops between them, the script is so sparse and the performances so interior that it would be a stretch to say that it blooms. Winslet plays Mary as a storm-battered scientist, emotionally walled off from years of neglect and suspicious of nearly everyone and everything around her. Discovering a fossilized sea lizard as a child and having it sold off to the British Museum to keep the family afloat will do that to a person. Ronan’s Charlotte, suffering from an unspecified personal tragedy (implied to be a miscarriage), is similarly guarded, a shell of herself, putting up appearances despite a deep depression. When their emotional self-reserves eventually crumble and they surrender to their passion, their coupling comes as a sudden, very explicit, and jarring surprise that feels more driven by needs of the script rather than a payoff for even the slightest hint of long-simmering interpersonal chemistry.

Fiona Shaw’s brief appearance as Mary’s old friend (flame?) comes almost as a shock, or at least a trip to another planet. Not only is she a hit at parties, she has fantastic clothes and a visit to her fabulous garden is the first indication that there’s such a thing as summer in this terribly gloomy town. The contrast is the point, but it’s still a pity terrific actresses like Winslet and Ronan find themselves stuck for so long in a washed-out aesthetic, deprived of more than a few moments of passing joy, with dialogue so sparse that even orientation to the most basic plot points remains unnecessarily mysterious. It’s certainly no accident that Lee takes most of the film to unearth nearly-fossilized emotions from each of their rocky depths. The intent may have been to emphasize the poignance in their hard-earned fleeting romance, but in practice the journey to get there was also a cold, wet, slog with limited rewards.

Ammonite is now showing in theaters and via video on demand.