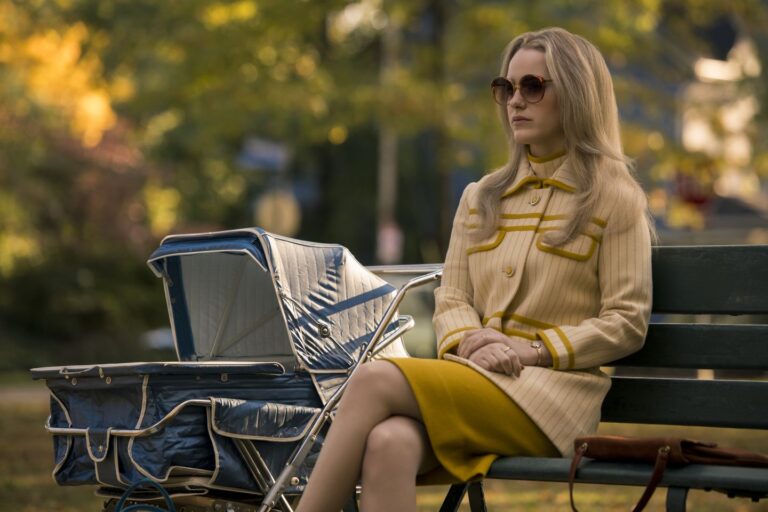 Being the wife of a criminal, Jean knows one very important thing: do not ask any questions. She doesn’t ask for details when her husband brings home a newborn baby for her (and her alone) to raise. She always wanted to have a baby but biology and her husband’s criminal record precluded both childbirth and adoption as viable options. Ignorance is quite literally bliss, in this case. When her husband Eddie says he’s going to be out late, she knows that he’s out doing something illegal but he’ll always be back in bed before she wakes up.

Awoken one morning after Eddie fails to come home, Jean (Rachel Brosnahan in a thrilling and multi-layered performance) is forced to go on the lam. Eddie double-crossed his associates and now he’s wanted, and so is she, because they presume she is hiding money and knows where he can be found.

Cal (Arinze Kene) is tasked with keeping her safe, finding a safe house for her, and trying to keep her newfound curiosity at bay. He doesn’t say too much and tries to let Jean know as little as he can allow about him. When one planned safe house turns out to be much less safe and secure, he is forced to take her to his family’s cabin in the middle of nowhere. There she meets his family and befriends his wife Teri (Marsha Stephanie Blake). Jean deduces early on that they have a few important things in common, beyond being married to criminals from the same organization.

I’m Your Woman has some very strong aspects, the acting (particularly from Brosnahan) is terrific, and the seventies decor and wardrobes feel authentic without being kitschy. It really is impressive to see how the film inhabits the era without becoming a distraction.

I’m Your Woman is a slow-burning thriller that does something unusual: it brings focus to the women who are affected by the choices their husbands make outside of their influence or control. Eddie, Jean’s husband is only in the first scene and he establishes himself as a major asshole, but the movie is about how Jean must deal with the wreckage he caused. I liked the way that director Julia Hart paced this film, where tension was simmering throughout, until the inevitable bloodshed became necessary (though there were a few twists so it wasn’t entirely predictable).

This is a bold, successful movie with a perfect combination of star and director. Rachel Brosnahan is vulnerable and/or strong when she needs to be. I could very easily see her starring in an action movie next time out. I hope she does.

I’m Your Woman debuts on Amazon Prime on Friday, December 11.