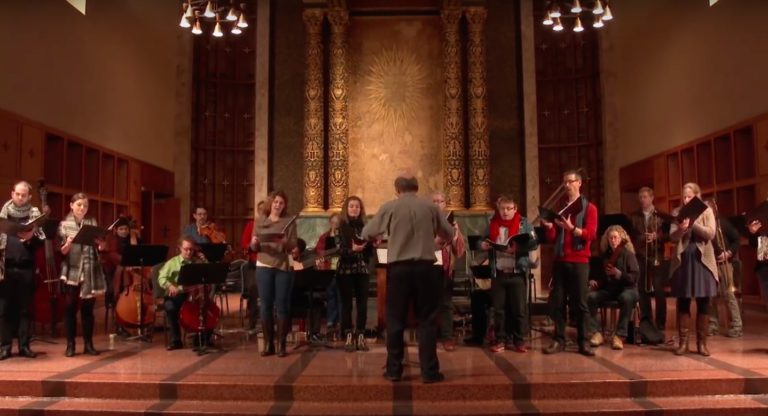 Earlier this season, we had the opportunity to hear “Messiah” as it might have been done at its first performance in 1742 in Dublin, under the informed scholarship and stellar musicianship of Stephen Stubbs. Then in mid-December we had the opportunity to hear a Vespers service as it might have been sung around 1619 to the music, and under the direction, of Michael Praetorius, this time devised with the equally erudite scholarship and musicianship of David Fallis, music director of the Toronto Consort.

It was performed by the consortium of local early music organizations formed over a year ago called Northwest Baroque Masterworks, comprising Seattle’s Early Music Guild, Early Music Vancouver, Portland Baroque Orchestra and Victoria’s Early Music Society of the Islands. The idea of this collaboration is that, together, these groups can present programs which would be financially beyond them individually.

The Praetorius Vespers received its first performance on December 17, 2015, in the Chapel at Bastyr University, then travelled to Portland, to Seattle at St James Cathedral, and then to Vancouver and Victoria.  Five performances in five days in different venues takes work and organization but judging by Wednesday’s performance, it was well worth it for both performers and audience.

The NBM orchestra includes many musicians familiar to Seattleites, but there was also the wind band of La Rose des Vents, playing Renaissance instruments: cornetto (forerunner of the trumpet) recorder, sackbut (early trombone) and dulcian, (early bassoon), which added timbres, and three theorbos (great bass lutes). A choir of 13 soloists was joined by a chorus of 22.

In the enlightening program notes by Fallis, he described how a Vespers service taking place around Christmas 1619, possibly in Dresden, would have been built. Occurring usually in the afternoon, it would have included one or two psalms, the Commandments, the Lord’s Prayer, and the “Magnificat” ending with the Collect for the day and a Blessing. However, while the choir would have sung much of it, sections were frequently interspersed with carols for the congregation (today, the chorus) to sing as well, including dividing the “Magnificat” into several parts to add carols. For these performances, Fallis included two more carols, one at the start one at the end, for the audience to sing as well.

The soloists sang solo, in duets, trios, quartets, and antiphonally, accompanied sometimes by strings, sometimes by wind band, sometimes by organ and lute alone, and all together with the chorus, so that the whole was continually changing and lively as well as musically coherent.

Several of the carols are familiar to us today, 500 years later, including “Joseph lieber, Joseph mein,” “In Dulci Jubilo,” and the melody for “Geborn ist Gottes Sohnelein,” the last two the carols for the entire audience to sing, as well as “Quem pastorem laudere,” in which the four solo sopranos sang from north, south, east, and west sides of the chapel, accompanied, one by organ, the other three by lute, each one singing one line of the first two verses before the choir joined it. The soloists’ strong voices were all very pure, no vibrato, so that clear harmonies pervaded.

It’s no surprise that Bach and Handel wrote such extraordinary choruses of interweaving lines which soar and develop to masterly climaxes. They had it in their heritage, as evidenced by Praetorius’ brilliantly intricate treatment of the “Magnificat,” particularly the third and fourth segments, from more than 100 years previously.

This performance was a bountiful feast of many different elements, each more lovely than the last. Let’s hope it will be recorded.