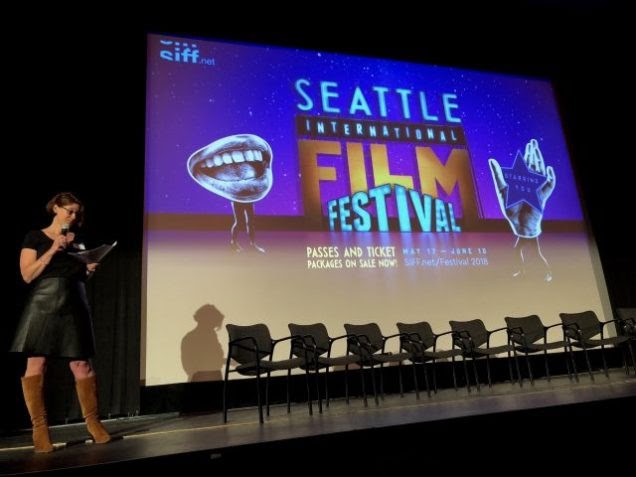 Like the arrival of longer, more reliably sunny days, nothing says spring in Seattle quite like the arrival of the 44th Seattle International Film Festival, which revealed its complete lineup of 433 films to donors and press last night and to the rest of the world this morning. Broken down, that’s 168 narrative features, 66 documentaries, 10 archival, 164 shorts, and 21 VR/360 works [plus four secret films revealed only to passholders who sign an oath never to reveal the titles]. Of these, the programmers did an admirable job of seeking novelty and diversity — 56% are first or second-time filmmakers, 65% are still seeking U.S. distribution, and 43% are made by women filmmakers.

Start diving into the website now: tickets go on sale to the general public on May 3rd, but members get a one day head start. The festival officially kicks off on May 17th at McCaw Hall with a fancy gala presentation of Isabel Coixet’s the Bookshop, starring Emily Mortimer, Bill Nighy and Patricia Clarkson. With the need to please everyone (or at least not offend sponsors), Opening Night films are famously hit-or-miss, but it’s always fun to put on whatever passes for Seattle finery, walk the red carpet, and catch up with film friends during the mad-rush for hors d’oeuvres, strategic deployment of drink tickets, and maybe just a little bit of dancing. All of this glamor can be yours for the price of a general admission ticket ($75/$65, members) all the way up to the full-on valet and gift bag luxury of the $275 “Red Carpet Experience”.

Never fear, if history is any indication, the gala will end before midnight to give you time to recover before charging into the next three weeks of filmgoing that starts in earnest on Friday afternoon. To  SIFF like a pro, revisit our time- and fest-tested tips, updated for 2018:

After approximately two hours with the full schedule, your friendly neighborhood SunBreak SIFF Team identified a few films that most intrigued each of us. We’ll continue to provide our usual rounds of picks and reviews, but here are a few things that we already have on our calendars.

Josh: Many of your picks were on my list of standouts from last night. I’m a bit iffy on opening night, but the other two gala presentations look like very solid selections. Beyond that, in browsing the guide, I noticed a handful of titles that have already started building buzz on Film Twitter from earlier festivals. SIFF’s a great opportunity to get caught up. To that end:

We’ll leave you with this year’s SIFF trailer. If you’ve followed our advice, by the end of the festival you’ll have seen it so many times that you should be able to quote it line for line.

Finally, despite all of this strategic advice, it really never hurts (too much) to try your luck with whatever happens to be playing on whatever night you happen to be free. Not every screening has an interminable line, sometimes that scary-looking line is just hard-core SIFFers with time on their hands and/or an ingrained sense of promptness. Many many times you may walk right in to a half-empty theater. It’s the chance to experience seeing something you enjoy on some level, if only just a window to a different world/experience than what you’re used to. We look forward to seeing you at the movies!

Keep track of the SunBreak’s SIFF coverage on our SIFF 2018 page, plus news updates and micro-reviews on Twitter @theSunBreak.