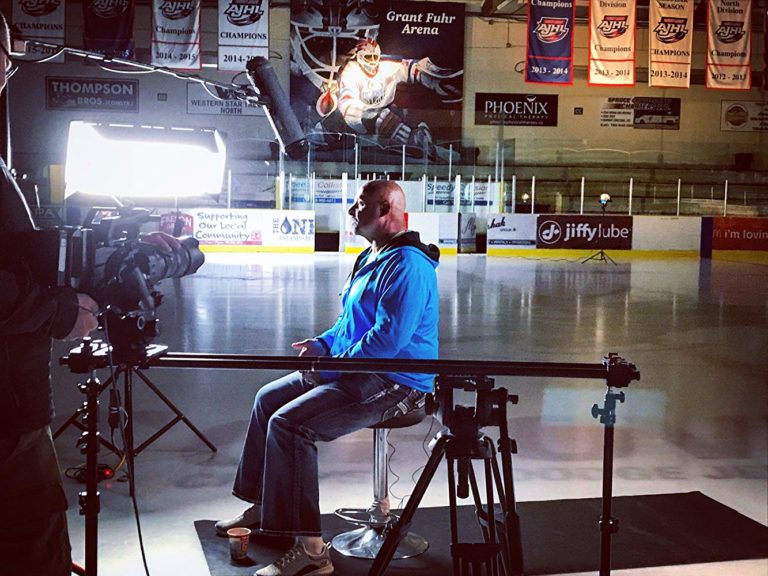 It all happened so quickly so I still cannot quite comprehend how I ended up on a phone call with Grant Fuhr, the legendary hockey Hall of Fame goaltender. I made a comment to a publicist for the Seattle International Film Festival that I was a long-time Fuhr fan and wished he was coming to SIFF along with the documentary about his life, Making Coco: The Grant Fuhr Story. Amazingly, a few calls and texts were made and I was on the phone with Fuhr some sixteen hours later.

Fuhr played in the NHL for twenty years (from 1981 to 2000), and the accolades are undeniable: six all star teams; five Stanley Cups; in 2003, he became the first black player in the NHL Hall of Fame; was one of the 100 greatest players of all time according to the NHL, and he was called the greatest goaltender of all time by Wayne Gretzky.

The career highlights give a reason for Making Coco, but it’s, I think, Fuhr’s personality and optimism come through so vividly that non-sports fans should enjoy the film, too.

I spoke with Fuhr by phone about making this documentary and his legendary career.

I think the first thing I’ll ask is how did this movie come about? And how were you approached about making a documentary about your life?

The gentleman that made the movie, Donnie Metz, I’ve known since I turned pro: 40 years ago or so, give or take. The last four or five years we’ve talked about doing it. Just kind of kicked it around, laughing and having some fun with it. He asked me again a couple of years ago if I’d actually seriously consider it, sit down and do it. I had nothing going on at the time so, I said, yeah. Might as well have some fun and do it.

Since I’m in Seattle and we don’t have an NHL team yet – were going to get one very soon, which is super exciting, but the there wasn’t a lot of hockey coverage here during the time when you played. I always liked watching you play, even when you made things difficult for my beloved Red Wings, so I didn’t know a lot about you and your story, until I saw this movie. It was really enjoyable to learn how you became the great player you were and great person you are.

Well, you’ve had such a remarkable career. So it’s definitely paid off.

It was a good choice. That’s something I wanted to do from the time I was four or five years old. To be able to do it: yeah, there’s bumps in the road to go with it, but it’s totally worth it. I think most people in Canada dream of playing in the NHL as a kid. The fact that I’m lucky enough to have been able to do that is just a bonus.

And I would bet that you’re, like you said, there were definitely some bumps on the road, but I bet your career turned out even better than your dreams were at that age.

Oh no question. I mean, one, I was lucky enough to play, but two, I get to play with five or six of the best players in the world at that time. I mean right time, right place, and it just happened to be a successful team then. We had a lot of fun.

Those Oilers teams were so phenomenal. And it was just incredible to watch you guys and I bet it was just amazing to be part of it: being such a crucial part too, being the goal keeper of such a high powered offense.

That was fun because it was a little different style. Nobody really played a wide open offense at that time. We knew we were going to give up some chances, but we also knew we’d score a lot of goals. So it was a fun way to play, because games were never boring.

I mean, when it comes down to crunch time, you know you just have to make that one save. They give you enough room to make some mistakes. But scoring four or five every night, you’ve got room to make a couple of mistakes.

And if you give up two or three then but score four or five you’re going to win more often than not. It must’ve been comforting knowing that.

What was it like for you to watch the documentary about your life?

It was a lot easier than I thought it would be. The hard part was living the life. To re-live it and do it in a film and everything, it was actually a lot of fun, because it’s a lot of parts you’d forgotten. I mean, I know I looked back at least three or four things that I’d forgotten all about. You go back through it again and it brings back a lot of good memories.

How involved were you in the making of it? Did you have like final say over the film? There were some things that were not 100% flattering depicted in the film. Or did you just trust-

That’s the great thing about working with Donnie: I had final say over everything. I mean, there’s miles of footage that got cut to the floor that still would have been fun, but I think once the DVD come out, he’ll probably add some of that footage to the DVD. It was fun doing it all. It was more fun seeing some of the stuff that actually got cut even.

What was the best part of seeing your life told in a movie?

I think just getting the chance to spend some time with some of the old teammates. That part was fun. You see the guys around all of probably once or twice a year so to get to spend a little extra time with the guys is always great.

One thing that was so impressive about your career was the longevity. You were such a dominant goaltender over many, many seasons. And the people interviewed in the film had such fondness for you several years later…

Were there people that they talked to that surprised you with their recollections?

You know it was a surprise, but it was a nice surprise. That’s the fun part: the good teams were always… your teammates are like family. So to see that I was thought of that way, they all thought of me that way, is what makes it special.

So what’s going on with this movie. I know it’s playing at the Seattle Film Festival and then I believe it’s playing in Canada, but do you know if people in the U.S. are going to be able to get the chance to see it?

We’re actually just putting a package together now to release it on video on demand, iTunes, bunch of different platforms. It should all be ready to release here probably July, August. We have some more festivals, then I got a premiere up in Colona, I’ve got a premier in Vegas coming up. So I think once Vegas is done, or actually once we’re done in St. Louis, I got that coming up too, then it will get released on video on demand.

Are you looking forward to going back to St. Louis knowing that that was such a big part of your career?

Oh I am. It’ll be a lot of fun. I’ve talked a few people there, just because of the good run they’re having for the Stanley Cup right now. It’ll be fun to take the film back there.

What have you been up to since you retired?

I spent 10 years coaching, and then the last seven years I’ve been running a golf course out in Palm Springs.

So now, I’m done fooling around with that a little bit. I think in probably the next year or two I’ll get back into hockey again.

How validating was it for you, from this film I don’t think you were treated completely fairly by the NHL. But how gratifying was it to be in the Hall Of Fame?

That’s kind of the top of your career. That’s your peers judging you. To end up in the Hall Of Fame, you know all the guys you played against, the different coaches, managers, the media, all appreciated what you did. That’s kind of the kicker for a career. The career is the bonus, that’s just the whipped cream on top of the bonus. It doesn’t matter what you think about your career, it’s kind of about what everybody else thinks. To get voted into the Hall Of Fame, about kicks it off. I mean, that tells you that everybody appreciated what you did.

Are you thinking that, “Wow, this is even better than I thought it was?” I mean, I’m sure you thought that you were a really good player then, but does that really hit you after you’re gone? You’re in the middle of it. I mean I’m sure it’s nice for you to make an All Star team and make the playoffs, but then when it’s over thinking, “Wow yeah, this is pretty special.”

You know right from day one that it’s special. You just don’t realize how special until you retire and actually get a chance to enjoy it. I think the 20 years I’ve played every year you’re just trying to get better. You don’t really take the time to enjoy what you’ve accomplished. And then I jumped right into coaching right afterwards. Once I got out of coaching I actually had a chance to sit back and enjoy it a little bit.

Watching as a fan, I was always impressed by how great you were late into your career. You were consistently great for twenty years, not great for a few years and pretty good the rest…

That’s part of being a good athlete because you try to get better every your. Part of the sole reason I retired was one, yeah, the body was a little worn out, but at the same time I was at a point where I wasn’t getting better. The only place it could go was down hill and nobody wants to play longer than they should. So I was lucky enough that the body was sore enough that it gave me a hint that it was time to get out. You don’t play yourself to that point where you have to be kicked out of the game: you actually get to leave on your own terms.

I don’t want to take up more of your Saturday afternoon, so can I just ask if there’s something you want people to know about Grant Fuhr that they might not already know?

Hopefully that we did the game justice and left it better than I was when I got there. I mean, it’s like what you do when you retire, the last five or six years I do probably 30 to 35 charity events a year. It’s all about giving back, and hopefully letting other kids realize that they can live their dreams.

I enjoyed the game. I think that’s the biggest thing. Some guys take the game as life or death. I took it as a game, where it’s not life or death: I enjoyed it. And it’s fun to be at the rink every day.