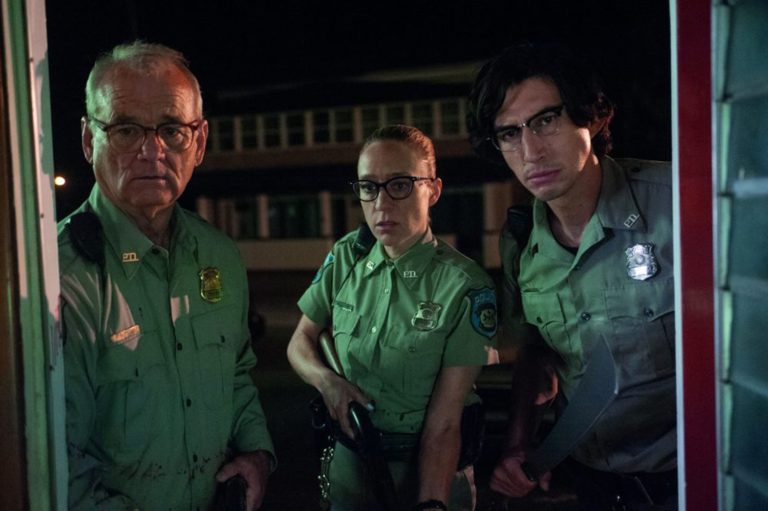 The Seattle International Film Festival officially wrapped earlier this month, but we’re revisiting some of our festival highlights for posterity with short reviews.

Our introduction to Centerville is via a pair of small town cops (Bill Murray and Adam Driver) paying a visit to Bob, the town’s forest hermit, to investigate a racist conservative farmer’s (Steve Buscemi, sporting a “Make American White Again” cap) accusations of chicken theft. The hermit, a wildly overgrown and wild-eyed Tom Waits, chases them off with a homemade gun and is left to provide a hallucinatory narration of how the strange behavior of ant colonies signals the end of the world. In the squad car on the way back to the station, even more is amiss, from the cops complaining that daylight savings is out of whack. More unsettling, Adam Driver’s awareness that the Sturgill Simpson title track is the film’s theme song and (spoiler) his ongoing certainty that “this is all going to end badly”.

When night finally falls, the dead arise from their graves beneath a psychedelic plasma moon. The first, Iggy Pop, seems to have required very little makeup for the role of a reanimated corpse on gory late-night coffee run. And so begins Jim Jarmusch’s stab at a zombie movie. Much more shambling affair than his vampire masterpiece, Only Lovers Left Alive, but also quite a bit funnier. The plot, such that it is, involves a fracking-induced global catastrophe that has caused the dead to rise and seek out familiar pleasures. We learn about this through a sprawling plot and an extremely game cast who are making the most of it. We have the aforementioned Murray and Driver, befuddled and laconic, with Chloe Sevigne rounding out the town law enforcement as the only one seeing fit to panic at the arrival of the undead. Tilda Swinton is a samurai Scotswoman running the funeral parlor with oddball settings turned all the way up to eleven. Selena Gomez rolls into town in a Pontiac Le Mans along with a couple of other hipsters from the city and their irony for an ill-fated night at the local inn. As things go to hell, local comic book nerd Caleb Landry Jones and long-suffering diner patron find themselves holed up in a hardware store, Rosie Perez narrating the terror on the local news, while our cops put on their bravest faces to confront the growing hordes.

As the plot shambled and shuffled through twists and too-knowing self-references, some threads were dropped. Some may find the lack of cohesion frustrating, but I found it all, Adam Driver’s deadpan line readings in particular, hilarious enough to keep me along for the ride all the way to find out just how badly it ended and to hear that catchy theme song at least one more time. ☆☆☆☆

A rural winter farm scene is interrupted by a car crashing into a pile of concrete bricks. The accident is happened upon by a quartet of children playing in the snow wearing odd parkas and strange masks. The apparent suicide sets off a slow-motion horror as residents of Irénée-les-Neiges, a remote Quebec town, reckon with the loss.

It’s the kind of place where you get to the only New Year’s Eve party by snowmobile, and where death of an apparently beloved twenty-something guy named Simon is so shaking that the mayor assembles the whole town to give a eulogy. Her remarks focus on the town not going extinct with a promise that the mourning period for their first death in a long time “must be done well”. The town’s steadfast independence is challenged when the regional government sends in someone “from Montreal” (a.k.a., small town politese for an outsider, and a Muslim woman, at that) to offer help to the remaining 215 townspeople dealing with their outsized grief.

As we get a sense of the town, oddity creeps in around the corners. (At one point, I scribbled “Is this meant to take place on earth?” in my notebook.) A snowshoeing couple bicker over the meaning of a mutilated deer in the woods. A socially awkward woman begins to hear strange noises in the night. One young couple is split over the woman’s desire to get out of town vs. her beau’s desire to refurbish an abandoned house on the edge of town with a grim history. While the dead guy’s mother burns sage and wanders the town, his brother visits his casket in a shed, and his father hits the road with no destination in mind gradually losing his mind.

What I originally imagined to be a hitchhiking hallucination turns out to be something even stranger, ushering a series of even darker occurrences that go largely unexplained yet deepen our understanding of the citizens of this dwindling outpost and their resilience. (Spoiler: It was around this point that I noticed how many townspeople shared names with characters on the excellent and moody French television series Les Revenants, suggesting an homage of sorts).

The camera inexplicably sways throughout; an unsteady observer. Filmed in a color palette is so bleak that it might as well be black and white and with a soundtrack largely composed of howling wind and low intermittent drones; communicating a sense of the bone-cold winter, the village’s bone-cold isolation, and the deep uncertainty of perseverance and grief. ☆☆☆½